An astronaut with the ‘first blood clot in space’ had to be treated remotely by a doctor in the USA – all while orbiting 200 miles above the Earth on the ISS.

University of North Carolina blood-clot expert, Dr Stephen Moll, treated the unnamed astronaut and his first reaction was to ask if he could make a house call.

The astronaut hasn’t been named for ‘privacy reasons’ but Dr Moll confirmed they were two months into a six month mission on the International Space Station.

He said it was ‘a very tricky situation’ due in part to the limited pharmacy on board the station and difficulties in extracting fluids in a zero gravity environment.

Dr Moll and a team of NASA specialists treated the astronaut with medication. 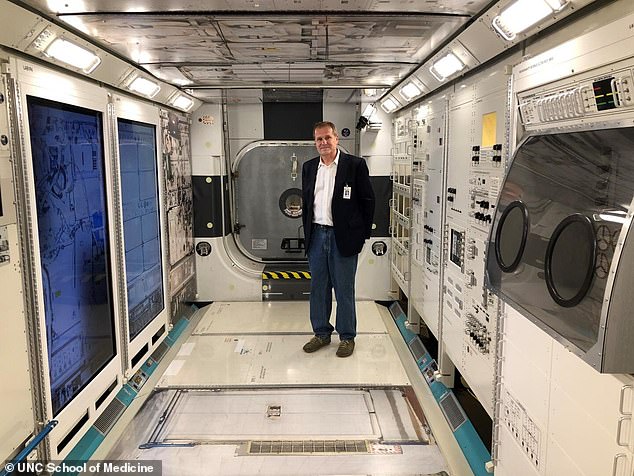 University of North Carolina blood-clot expert, Dr Stephen Moll, treated the unnamed astronaut and his first reaction was to ask if he could make a house call – seen here in an Earth based replica of the space station

‘NASA told me they couldn’t get me up to space quickly enough, so I proceeded with the evaluation and treatment process from Earth’, he said.

The space based patient was diagnosed with deep vein thrombosis, a blood clot in the jugular vein of the neck.

It was the first time a blood clot had been found in an astronaut in space so there was no established method of treatment for the condition in zero gravity.

It was found during a research project that involved astronauts taking ultrasounds of their neck to find out how body fluid is redistributed in zero gravity. 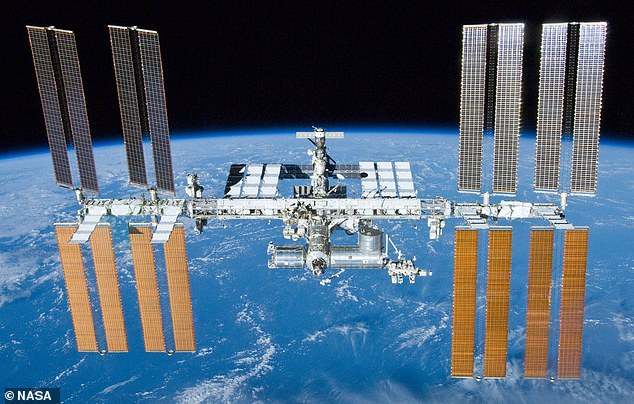 ‘If it wasn’t for the study, there’s no telling what the outcome could have been’, said Dr Moll, who is now working with NASA on detection and treatment of blood clots.

‘Normally the protocol for treating a patient with DVT would be to start them on blood thinners for at least three months’, said Dr Moll.

He said this was to prevent the clot from getting bigger and to lessen the harm it could cause if it moved to a different part of the body such as the lungs.

There was a risk of internal bleeding from an injury to someone taking blood thinners that could be difficult to stop, according to the blood-clot expert.

‘In either case, emergency medical attention could be needed. Knowing there are no emergency rooms in space, we had to weigh our options very carefully.’

Deep vein thrombosis (DVT) occurs when a blood clot forms in a deep vein, usually in the leg.

It is associated with being inactive for a long time, such as after an operation or during a journey, as well as being linked to a family history of the condition, pregnancy and obesity.

Symptoms include pain, swelling, redness and tenderness in the affected area.

If the clot dislodges and travels to the lung, it can cause a deadly pulmonary embolism.

This occurs in around one in 10 DVT cases.

Anti-clotting drugs are given to prevent the thrombosis growing and dislodging.

The risk of developing DVT can be reduced by wearing compression stockings and staying as active as possible while on flights.

People should also maintain a healthy weight, not smoke and exercise regularly.

Moll and a team of NASA doctors decided to go ahead with the blood thinning treatment for the astronaut but had limited pharmaceutical options.

They only had an injection based version of the drug they decided to use – Enoxaparin – on board the station and only enough to last 40 days at the dosage prescribed by Dr Moll.

Three days after the Enoxaparin ran out a supply ship arrived at the ISS containing a different medication – Apixaban – a tablet selected by Dr Moll that the patient could take for the final part of their mission.

The full treatment lasted 90 days and also involved the astronaut performing ultrasounds on their own neck with guidance from radiologists on Earth.

There were also regular phone calls and emails between the patient and Dr Moll throughout the process, in an ‘extreme example of telemedicine’.

‘It was incredible to get a call from an astronaut in space’, said Dr Moll.

‘They just wanted to talk to me as if they were one of my other patients. And amazingly the call connection was better than when I call my family in Germany, even though the ISS zips around Earth at 17,000 miles per hour.’

The astronaut stopped taking the medication four days before their return to Earth due to the potential danger of re-entry.

When Dr Moll examined the patient after they’d landed on Earth he found no more treatment was needed for the blood clot.

He is now working with NASA to better understand the risk of blood clots in zero gravity and future treatment options.

‘How do you minimize risk for DVT? Should there be more medications for it kept on the ISS?’, said Dr Moll.

‘All of these questions need answering, especially with the plan that astronauts will embark on longer missions to the moon and Mars.’

The findings have been published in the New England Journal of Medicine.