Who wants to be an astronaut?

If the answer is you, there’s a reality TV show, appropriately titled “Who Wants to Be an Astronaut?”, that you ought to apply for.

The Discovery Channel is seeking to cast about 10 would-be astronauts to compete during the series’ eight-episode run next year for a seat on a real-life trip to the International Space Station, followed by live coverage of the launch of the winner on a SpaceX rocket.

“We’d like a diverse group of people that each have their own story, why they want to go to space, why they’re worthy of going to space, what their back story is,” said Jay Peterson, president of Boat Rocker Studios, one of the companies producing the show for Discovery.

That person will not be the only amateur astronaut destined for the space station next year. So many tourism and entertainment efforts are preparing trips there that it could begin to look more like a soundstage for television shows and a hotel for the wealthy than an orbiting research laboratory.

Many who work in the business of space believe that is a good thing, even if trips to orbit will remain out of reach of all but the wealthiest passengers in the near term.

“This is a real inflection point, I think, with human spaceflight,” Phil McAlister, NASA’s director of commercial spaceflight development, said during a news conference this month announcing that the agency had signed an agreement with Axiom Space, a Houston-based company, to fly the first mission of private astronauts to the space station.

“I’m very bullish on the tourism market and the tourism activity,” Mr. McAlister said. “I think more people that are going to fly, they’re going to want to do more things in space.”

Although the International Space Station may stay up in orbit at least until 2028, in the future it will not be only space station. Russian space authorities last month declared their intention to leave the I.S.S. in the coming years and build a station of their own. A Chinese orbital outpost is expected to come online in the next year or two.

Even NASA is looking for what comes next, promising support for commercial alternatives. Axiom, for one, is building a commercial segment, which will first be added to the International Space Station and later serve as a core piece of an Axiom station.

“By the end of the decade I believe we will have at least five, possibly 10 private stations,” said Jeffrey Manber, chief executive of NanoRacks, a company that arranges commercial use of I.S.S. and is also planning its own orbital outposts. “Some for entertainment, some for research, some for in-space manufacturing, some for preparing the way for our journey to Mars. At long last, our more pragmatic aspirations are becoming reality.”

TV and film projects in orbit are attracting the greatest attention so far. In the year ahead, the Russian space agency, Roscosmos, and a Russian broadcaster, Channel One, are behind a project in the year ahead to send Yulia Peresild, an actress, and Klim Shipenko, a filmmaker, to the space station to make the movie “Challenge.” Ms. Peresild will play a surgeon sent to orbit to save the life of a Russian astronaut. 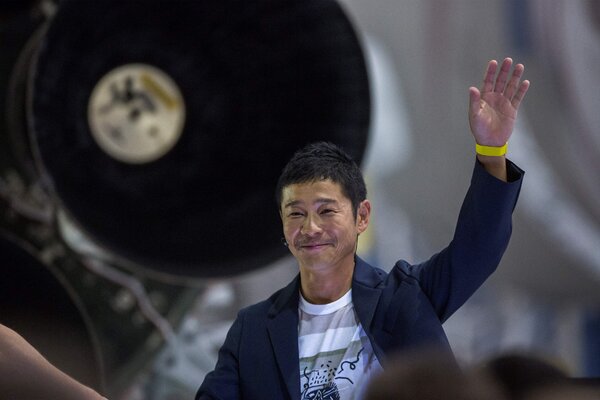 They will be flying on a Russian Soyuz rocket. So will a Japanese fashion entrepreneur, Yusaku Maezawa, and Yozo Hirano, a production assistant. Their 12-day trip, scheduled to launch in December, is a prelude for a more ambitious around-the-moon trip Mr. Maezawa hopes to embark on in a few years in the giant SpaceX Starship rocket currently in development. His trip to the space station is being arranged by Space Adventures, a company that arranged eight similar visits for private citizens between 2001 and 2009.

There is still the possibility of Tom Cruise going to space, too.

A year ago, Deadline reported that NASA was in discussions with the megamovie star on shooting an action-adventure film on the station. Since then, nothing more of Mr. Cruise’s out-of-this-world movie project has been revealed publicly.

There will also be other trips to space going places other than the space station. Jared Isaacman, a billionaire entrepreneur, has bought an orbital trip from SpaceX, the rocket company started by Elon Musk.

A bit closer to Earth, two companies, Virgin Galactic, founded by Richard Branson, and Blue Origin, founded by Jeff Bezos, are getting closer to flying tourists on short, suborbital flights that will offer a few minutes of weightlessness.

On Saturday, Virgin Galactic conducted a successful test flight of its SpaceShipTwo rocket plane. And Blue Origin has announced that its New Shepard spacecraft will have people aboard its next flight, scheduled for July 20, and it is auctioning one seat. As of Wednesday, the high bid was $2.8 million.

Axiom Space, the Houston company, is central to some coming trips to the space station. Its first flight to the International Space Station, which is to launch aboard a SpaceX rocket as early as January, will carry three passengers, who are spending $55 million each for their eight days or so in orbit. Michael López-Alegría, a former NASA astronaut who is now a vice president at Axiom, will accompany them, serving as commander of the mission.

This month’s announcement was the first time NASA acknowledged that the Axiom mission was officially on the space station schedule.

“We’re finally able to open our doors to private citizens and allow others to experience the magic of living and working in space,” said Dana Weigel, deputy manager for the space station at NASA. “The dream is really to allow everyone access to space, and this is a pretty exciting starting point here.”

Producers of Discovery’s “Who Wants to Be an Astronaut” expect the winner to be on board for the second Axiom mission to the space station, which might take off six or seven months after the first one. For now, an agreement between the Discovery team and Axiom has not been finalized, and NASA has yet to choose Axiom to conduct the second private space tourism flight.

The NASA-led part of the station could accommodate two private astronaut missions a year, space agency officials have said, and other companies are also interested in participating.

“We are seeing a lot of interest in private astronaut missions, even outside of Axiom,” Ms. Weigel said. “At this point, the demand exceeds what we actually believe the opportunities on station will be.”

Still, on Tuesday, Axiom announced two people who would be in the seats for that second mission: Peggy Whitson, a former NASA astronaut who now works for Axiom, will be the commander, and John Shoffner, a paying passenger who made his fortune as head of a company that manufactures conduits for fiber optic cables, will serve as pilot for the mission.

Dr. Whitson, who holds the record for the most cumulative time in space by a NASA astronaut — 665 days — joined Axiom as a consultant a year ago, in hopes of getting to space again and adding to her record. “Yes, most definitely,” she said. “That was the carrot.”

Mr. Peterson said plans for the Discovery show grew out of discussions with Axiom early in 2020 and that it would be “a premium documentary” and less like “Survivor” or other ruthless reality television competitions.

“There’s real stakes here, unlike those kinds of comparisons,” Mr. Peterson said. “We want to create an interest in somebody, so that everyone can feel like they maybe someday have the ability to do this.”

Paul Ricci, a founder of BoomTown Content Company and also involved in the show, said the competition will be based on what astronauts and others who have worked in human spaceflight have said was needed to succeed.

“If these are the qualities that astronauts need to have,” Mr. Ricci said, “then we can model challenges that test those qualities. Things like problem solving, teamwork, precision and focus, grace under pressure, handling the unexpected.”

The idea of staging competitions to get to space is not new. In 1990, Toyohiro Akiyama, a Japanese television journalist, went to the Russian space station Mir. The Tokyo Broadcasting Service bought the seat on the Soyuz and Mr. Akiyama was selected from 163 candidates. A year later, Helen Sharman, an English chemist, also flew to Mir, selected from among 13,000 British applicants in a privately financed campaign.

A space-based reality television show is not a new idea either. In 2000, NBC signed a deal for a show developed by Mark Burnett, who had also produced “The Apprentice” and “Survivor.” The winner of that competition would have also traveled to Mir, but NASA pressed Russia to abandon Mir and shift its focus to the International Space Station, which was in the early stages of construction.

Russia relented, Mir was nudged to a watery crash in the Pacific in 2001, and the reality television show never came to fruition.

As for Mr. Cruise, it is a guessing game when he and the movie director he is working with, Doug Liman, might head to the space station, and Axiom has never commented on whether it is involved in Mr. Cruise’s movie.

Asked on Monday if there were any developments that could be shared, Amanda Lundberg, Mr. Cruise’s publicist, replied, “Thanks but this is not possible.”