The mythical island was first described by the Greek writer in his texts ‘Timaeus’ and ‘Critias,’ said to be an antagonist naval power that besieged “Ancient Athens”. In the story, Athens repels the Atlantean attack unlike any other nation of the known world, supposedly giving testament to the superiority of ancient Greece. The legend concludes with Atlantis falling out of favour with the deities and submerging below the water.

For thousands of years historians have dedicated their lives to finding Atlantis, and none have been successful.

But the Discovery Channel revealed how a stunning breakthrough could change that during its new episode of ‘Blowing Up History’.

“In its prime, its narrow streets are intricately paved with stone and its town square is lined with picturesque houses which tower three and four storeys high. 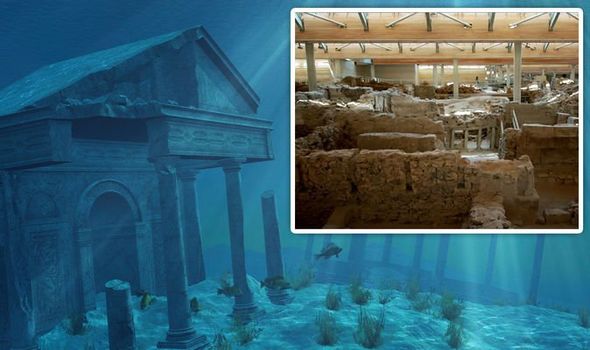 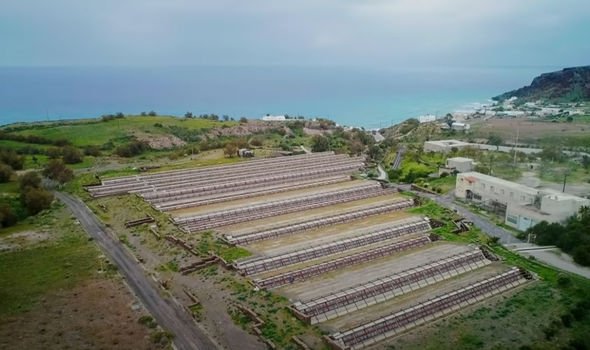 “An array of colourful stones decorate the facades. The ruins are now protected by a high-tech roof providing a controlled internal climate.

“The ruins suggest a highly sophisticated civilisation flourishes here for thousands of years before its abrupt end.”

The series went on to reveal how Akrotiri was struck by a volcanic eruption, as described by Plato.

It added: “An eruption creates a huge 20 mile-high cloud that blasts ash as far as Egypt – 200 miles away.

“Ancient writers described how the ash cloud plunges the world into darkness, causing a global winter for two years. 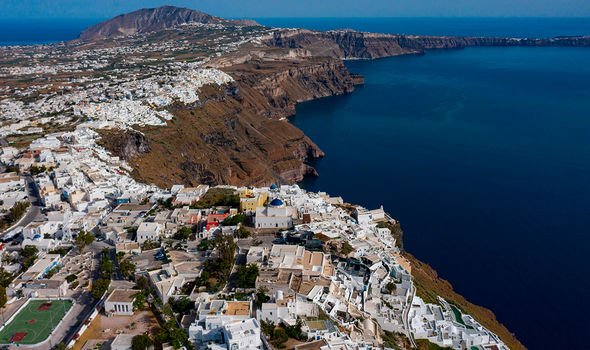 “A blanket of ash, up to 200 feet thick, covers the entire island.

“As the empty volcano collapses into the water, it changes the shape of the island forever.”

More than 3,000 years on, modern-day archaeologists are investigating the ancient society.

The narrator added: “The eruption of Santorini in 1650BC decimates all life on the island and erases an entire civilisation.

“The ruins preserved by the volcanic ash provide a glimpse into this lost civilisation. 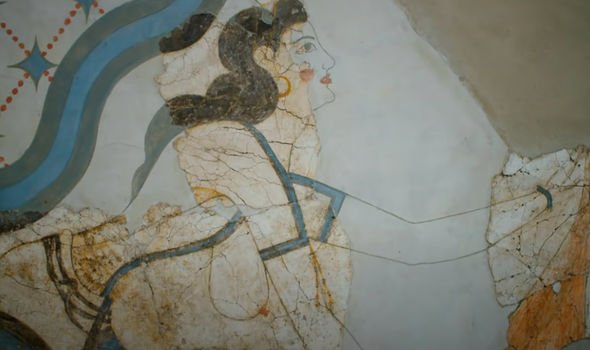 “In 360BC, the Greek philosopher Plato records the legend – the story of an advanced civilisation destroyed by the gods for their arrogance.

“Since the discovery of Akrotiri in the mid-19th century, many scientists have claimed Santorini is the legendary lost island of Atlantis.

Remarkably, paintings discovered by archaeologists appear to depict a similar society to that described by Plato.

The narrator continued: “Clues to the connection can be found in the incredible frescoes that decorate the walls of every home. 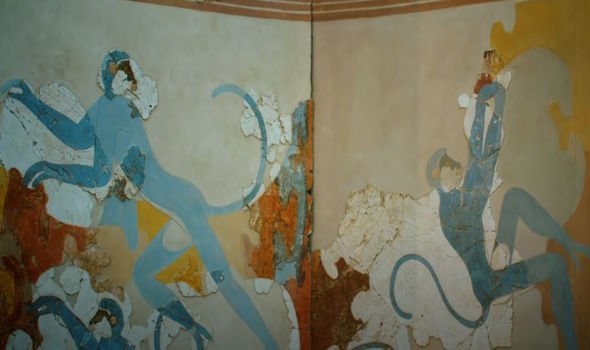 “They capture a snapshot of the locals. They are evidence of a highly sophisticated and wealthy civilisation.

“Its sudden disappearance leads many to believe Santorini is the lost island of Atlantis.”

While present-day philologists and classicists agree on the story’s fictional character, there is still debate on what served as its inspiration.

Plato is known to have freely borrowed some of his allegories and metaphors from older traditions.

This led a number of scholars to investigate possible inspiration of Atlantis from Egyptian records of the Thera eruption, the Sea Peoples invasion, or the Trojan War.

Others have rejected this chain of tradition as implausible and insist that Plato created an entirely fictional account.