Why you should ALWAYS dispose of your batteries safely: Discarded electricals were responsible for more than 700 FIRES in bin lorries and recycling centres in the UK this year, report warns

When chucking out your old gadgets after getting some new gear for Christmas, you may want to think about removing the batteries first.

That’s because research from Material Focus has revealed that over 700 fires were started in bin lorries and recycling centres this year by dumped electricals.

Batteries can be punctured by other items in the disposal process, damaging the separation between the electrodes and causing them to explode or ignite.

If batteries come into contact with another piece of metal they can also catch on fire, with nearby dry waste acting like kindling. 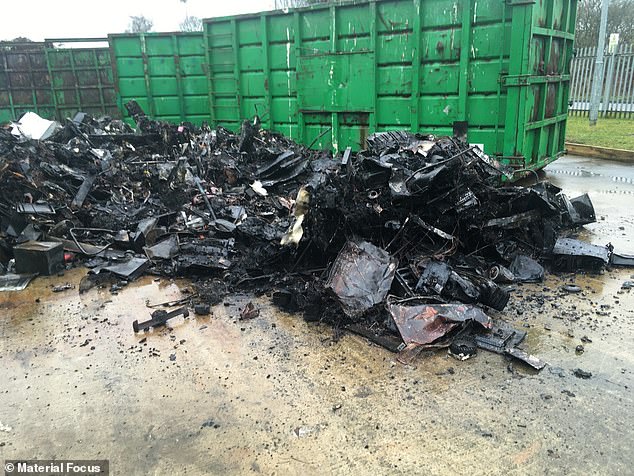 The gadgets responsible for fires tend to be small, cheap and frequently used, like electric toothbrushes, shavers and chargers

Remove all batteries and bulbs if you can.

If recycling a smart device or computer, take out the memory card or delete all its data.

Take both to your nearest recycling point, like recycling centres, libraries and supermarkets.

If your council offers a battery and gadget recycling service, you can leave the bags outside for collection day.

Material Focus, a pro-recycling organisation, surveyed 60 UK local authorities about the fires it had experienced that were caused by crushed or damaged batteries in the waste stream.

It revealed that there are over three times more blazes occurring than reported in 2021, and nearly 90 per cent of respondents feel they are an increasing problem.

The gadgets responsible tend to be small, cheap and frequently used, like electric toothbrushes, shavers and chargers.

These are also the kinds of electricals that consumers do not realise have batteries in that they should be removing.

According to the Environmental Services Association, lithium-ion batteries are responsible for about 48 per cent of all waste fires in the UK every year.

Battery fires not only present a direct threat to the public and waste management staff, but also cost around £158 million annually in damage.

Mickey, a waste truck driver for Buckinghamshire Council who experienced a lorry fire, said: ‘In the space of a couple of minutes, it went from a bit of smoke to two foot flames leaping out of the waste truck.

‘On this occasion we were lucky, we could get to a safe place, which meant no one was hurt.

‘We were also able to, with the support of the fire services, put the fire out.

‘However, these types of fires, if we were on a residential street, could cause untold damage.

‘As it is, our trucks are often seriously damaged, causing hundreds of thousands of pounds of damage.’ 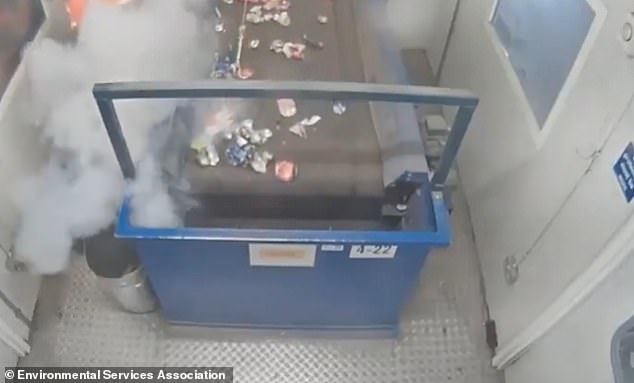 A survey of 2,001 UK adults in August 2021 showed that up to 45 per cent of households are unaware of the dangers of leaving the batteries in their waste electricals. Pictured: A plume of smoke is seen rising from a bin in a recycling centre in the UK

Games console re-sale value can range from an Xbox One at £110 to a Nintendo Switch at £200.

Desktop computers, including the monitor, could be re-sold for around £25.

A survey of 2,001 UK adults in August 2021 showed that up to 45 per cent of households are unaware of the dangers of leaving batteries in their waste electricals.

‘If they can, they should remove any hidden batteries from their electricals and recycle the batteries and electricals separately.

‘If they can’t remove the batteries then they should recycle their electricals separately as always.’

Research conducted this week by Material Focus revealed that 41 per cent of adults in the country are planning to buy more tech over the festive period, which could result in 53.5 million new electrical items being bought in the next four weeks.

Almost a quarter of us also buy more gadgets in the weeks of Black Friday and Christmas than at any other time of year. 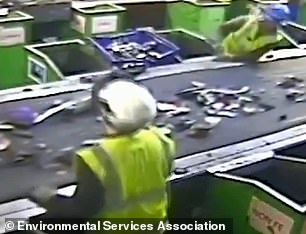 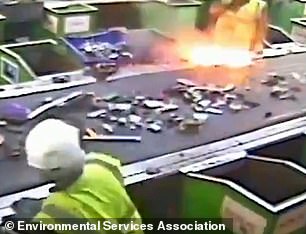 Battery fires not only present a direct threat to the public and waste management staff, but they also cost around £158 million annually in damage. Pictured: A member of staff standing next to a conveyor belt at a recycling centre (left) before jumping back after a sudden explosion (right)

As a result, Materials Focus has launched the ‘Stop Battery Fires Campaign’ to raise awareness of how households can lower the risk of a blaze by safely recycling their gadgets.

Over 70 local authorities will be promoting the safe removal of batteries and that they should be recycled separately from the device.

If you are unable to remove the batteries, the entire device should be recycled separately from your other waste, they say.

Mark Andrews, National Fire Chief’s Council Waste fires lead said: ‘We urge people to recycle electricals and batteries and not to dispose of them with general household waste.

‘People are often surprised to hear that batteries can cause fires in both bin lorries and waste plants, but they do and as we use and dispose of more electronic devices these incidents are not rare.

‘These fires can be challenging for fire services to deal with, have a significant impact on local communities and present a real risk to staff working on lorries and waste plants.

‘Everyone can do their bit and prevent fires by ensuring they dispose of electrical items correctly.’

People can find their nearest recycling point for batteries and electricals by visiting the Recycle Your Electricals website.

Lithium-ion batteries, found in smartphones, electric vehicles and laptops, present a future toxic waste disaster, as they run out, but a startup claims to have the solution.

Ascend Elements, based in Westborough, Massachusetts, created a process that shreds used batteries and turns them into cathode materials, ready to be turned into future working batteries, and placed inside electric vehicles.

The process creates a powder called ‘black mass’, that is then filtered to remove impurities, and all individual metal elements extracted, reducing the need for more mining.

These upcycled batteries can be custom built to suit a specific manufacturer, last longer than traditional EV batteries, and can be charged more often, the firm said. 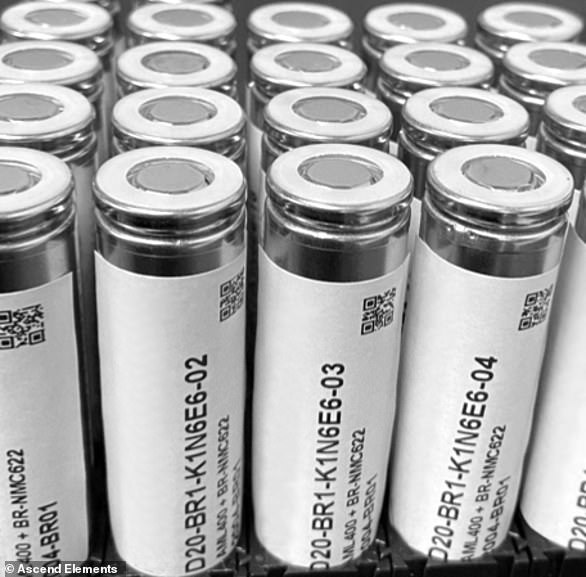 Lithium-ion batteries, found in cellphones, electric vehicles and laptops, present a future toxic waste disaster, as they run out, but a startup claims to have the solution