Scientists have created an environmentally-friendly bendable concrete that could save buildings from buckling during earthquakes.

An Australian research team developed the material, which is made out of waste products such as fly ash – a by-product of coal-fired power stations.

It’s suited to earthquake zones in countries such as Japan and New Zealand where the brittle nature of conventional concrete leads to catastrophic structural damage.

A video shows the new creation – the ‘engineered geopolymer composite’ – yielding impressively under a weight that snaps conventional concrete in two.

‘Our laboratory test results showed that this novel concrete is about 400-times more bendable than normal concrete, yet has similar strength,’ said Dr Behzad Nematollahi at the Faculty of Science, Engineering & Technology at Swinburne University of Technology in Melbourne.

‘Building in areas vulnerable to that sort of natural disaster is one of the main uses that we can see for this material.

‘Its quality has a massive effect on the resilience of our infrastructure such as buildings, bridges and tunnels.’ 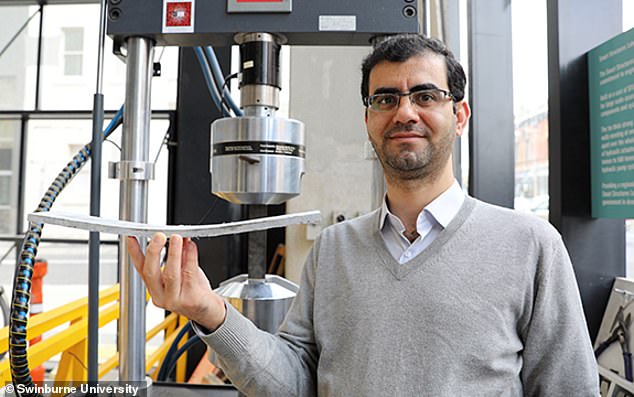 Dr Behzad Nematollahi with a sample of the novel concrete developed at Swinburne. The production of this material requires 36 per cent less energy than conventional concrete

Traditional concrete is not only prone to shattering when stretched or bent, but produces a huge carbon footprint.

This is because the production of cement involves heating limestone to extremely high temperatures, which releases carbon dioxide.

Using industrial waste products makes this process – which has been patented by the team of developers – much more sustainable.

The team used a low-calcium fly ash supplied from Gladstone power station in Queensland, Australia and two types of slags – a glass-like by-product formed in smelting and welding.

HOW IS CONCRETE MADE?

In its simplest form, concrete is a mixture of paste and aggregates, or rocks.

The paste, composed of cement and water, coats the surface of the fine and coarse aggregates.

Through a chemical reaction called hydration, the paste hardens and gains strength to form the rock-like mass known as concrete.

Within this process lies the key to a remarkable trait of concrete: it’s plastic and malleable when newly mixed, strong and durable when hardened.

These qualities explain why one material, concrete, can build skyscrapers, bridges, sidewalks and superhighways, houses and dams.

Polymer concrete is a type of concrete that uses polymers, typically resins, to replace lime-type cement as a binder.

The inclusion of short polymeric fibres in the mix – a type of man-made fibre that used synthetic chemicals – creates multiple ‘hair-sized cracks’ when put under tension to prevent it from breaking.

Cracks in conventional concrete can make it less resilient against earthquakes or tornadoes, as well as man-made forces, such as bomb blasts in terrorist attacks.

This new creation is able to bend when force is applied to it, meaning buildings made from it will be more likely to remain intact during earthquakes, hurricanes, blasts or projectile impacts.

This is vital because of the reliance on concrete in new infrastructure projects worldwide.

‘Concrete is the most widely used construction material in the world – in fact, it is the second-most consumed material by human beings after water,’ Dr Nematollahi said.

The team detail their sustainable concrete in the journal Construction and Building Materials. 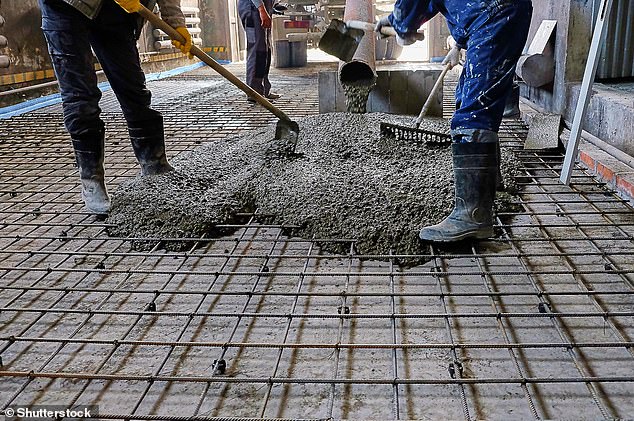 Traditional concrete is not only prone to shatter when being stretched or bent, but also has a huge carbon footprint due to calcination of limestone

Bendy concrete is not an entirely new creation – one laboratory at the University of Michigan has been taking its inspiration from iridescent material on the inside of sea snail shells to develop its own version.

Nacre, the coating on the inside of sea snail shells, is highly pliable, allowing the shell to resist impacts without fracturing.

This is thanks to a natural layer of elastic polymer that allows the shells to slip from side to side under stress.

Victor C Li, Professor of materials science at the University of Michigan, previously wrote that concrete’s brittleness is to blame for the ‘woeful state of US infrastructure’.

This is what made US earthquakes such as the 1989 Loma Prieta earthquake in Northern California and the 1994 Northridge quake in LA so economically damaging, as well as fatal.

Catastrophic earthquakes are caused when two tectonic plates that are sliding in opposite directions stick and then slip suddenly.

Tectonic plates are composed of Earth’s crust and the uppermost portion of the mantle.

Below is the asthenosphere: the warm, viscous conveyor belt of rock on which tectonic plates ride.

These are called intraplate earthquakes.

These remain widely misunderstood but are believed to occur along minor faults on the plate itself or when ancient faults or rifts far below the surface reactivate.

These areas are relatively weak compared to the surrounding plate, and can easily slip and cause an earthquake.