Form of hereditary blindness can be cured in BOTH eyes ‘by injecting modified DNA into one of them’ to fix a faulty genetic mutation, study finds

A form of blindness that affects both eyes can be cured by injecting modified DNA into one of the eyes.

A total of 37 people suffering with Leber hereditary optic neuropathy (LHON) were successfully cured with an experimental treatment.

The jab is called a known as a viral gene therapy vector and contains DNA formally called rAAV2/2-ND4 which is designed to fix the genetic issue causing sight loss.

LHON is a hereditary disease that affects around one in 40,000 people, usually in their 20s and 30s, causing blindness. 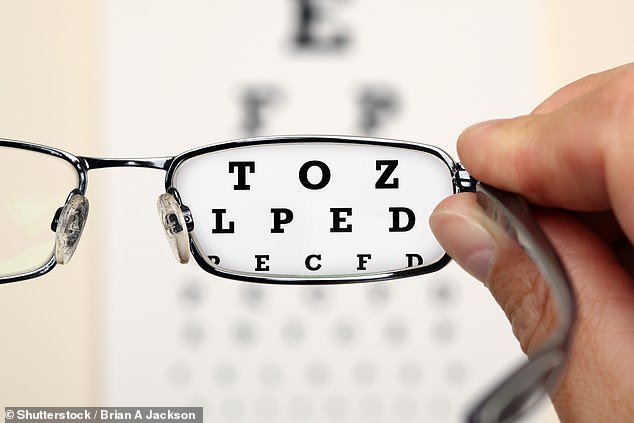 Current treatments for the disease are limited and less than 20 per cent of people recover and even then, most are unable to read the largest letter in an eye test.

It is believed the DNA in the jab can migrate from one eye to the other, improving onejab to fix both eyes.

Co-author Dr José-Alain Sahel from the University of Pittsburgh in the United States said: ‘As someone who treats these young patients, I get very frustrated about the lack of effective therapies.

Scientists have used gene therapy to restore sight in blind mice and plan to start clinical trials of the technique on humans later this year.

Key to the process is a light sensing protein called MCO1 opsin, which restores vision when attached to specific cells at the back of the eye.

These so-called bipolar cells, which remain intact in people with common eye diseases, are part of the sensory pathways for light perception and vision.

In trials by the US firm Nanoscope, totally blind mice with no light perception were shown to regain significant retinal function and vision after treatment.

Treated mice were faster in visual tests in the lab, such as navigating mazes and detecting changes in motion.

In humans, the therapy would be administered as a single injection into the eye for elderly people with age-related macular degeneration and retinitis pigmentosa (RP).

‘These patients rapidly lose vision in the course of a few weeks to a couple of months.

‘Our study provides a big hope for treating this blinding disease in young adults.’

The DNA in the jab replaces a mutation found in people with LOHR. This genetic substitution removes the mutations, called m.11778G>A, and replaces it with a healthy version.

m.11778G>A destroys retinal ganglion cells, which are integral in how a person sees, leading to optic nerve degeneration and rapidly worsening vision in both eyes.

Dr Yu-Wai-Man said: ‘By replacing the defective MT-ND4 gene, this treatment rescues the retinal ganglion cells from the destructive effects of the m.11778G>A mutation, preserving function and improving the patient’s visual prognosis. The outcomes can be life-changing.’

Researchers injected modified DNA into 37 patients who had suffered vision loss for between six and 12 months.

The technology, called mitochondrial targeting, targets the vitreous cavity at the back of the eye.

One eye received the DN jab, while the other one was injected with a placebo.  Researchers used a standard eye test sight board to determine any improvements.

Sight in the treated eye improved by 15 letters and in the other eye by on average 13 letters.

Co-author Dr Patrick Yu-Wai-Man at the University of Cambridge said: ‘We expected vision to improve in the eyes treated with the gene therapy vector only.

‘Rather unexpectedly, both eyes improved for 78 per cent of patients in the trial following the same trajectory over two years of follow-up.’

After the success of the clinical trials in people, the researchers sought to understand more about how the jab conferred protection in both eyes.

They therefore replicated the experiment on monkeys,   cynomolgus macaques, to understand how treating one eye improved sight in the other.

Monkeys were injected with the modified DNA and three months later the researchers analysed tissue from various parts of the animal’s eye and brain.

They found the modified DNA was spread around both eyes, reaching as far as the retina and optic nerve of the untreated eye.

‘The treatment has been shown to be safe and we are currently exploring the optimal therapeutic window.’