The British Heart Foundation (BHF) has revealed the winners of its annual ‘Reflections of Research’ photography competition.

The captivating images showcase the cutting-edge heart and circulatory disease research taking place across the UK.

This year’s winning image, ‘Explosive beginnings’, provides a close-up snapshot of the moment endothelial cells that line the interior surface of blood vessels begin to ‘sprout’ – a process which adds entirely new blood vessels to the existing network. 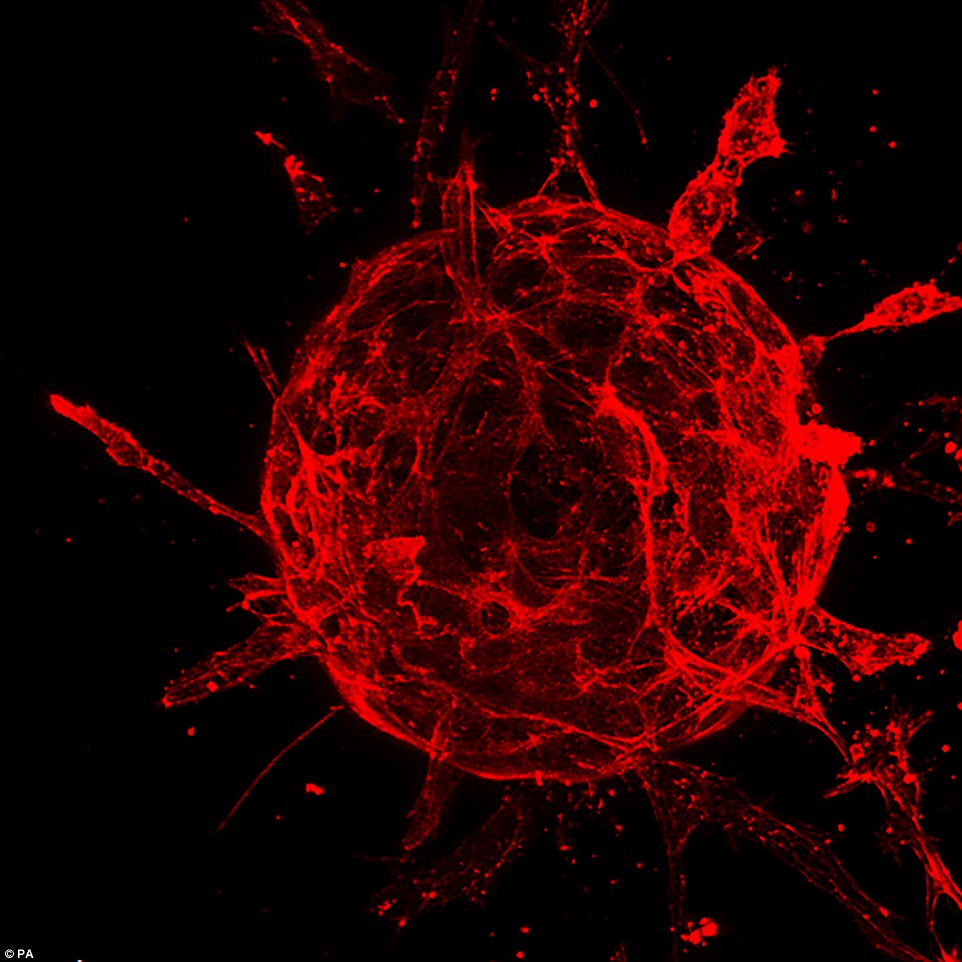 This year’s winning image, ‘Explosive beginnings’, provides a close-up snapshot of the moment endothelial cells begin to ‘sprout’ – a process which adds entirely new blood vessels to the existing network. The winning researcher, Courtney Williams, is a Masters student and PhD candidate at Leeds University

Endothelial cells form a barrier between the circulating blood and the vessel wall.

They also help to protect blood vessels from damage and release important chemical messengers which help to control blood pressure.

The winning researcher, Courtney Williams, is a Masters student and PhD candidate at Leeds University.

Her lab are developing new ways to map the growth of new blood vessels within their surrounding landscape in 3D.

Understanding the complex secrets of blood vessel formation could be harnessed to boost the regrowth of damaged blood vessels after a heart attack.

The runner-up image came from Matt MacGregor Sharp, a PhD student at the University of Southampton. 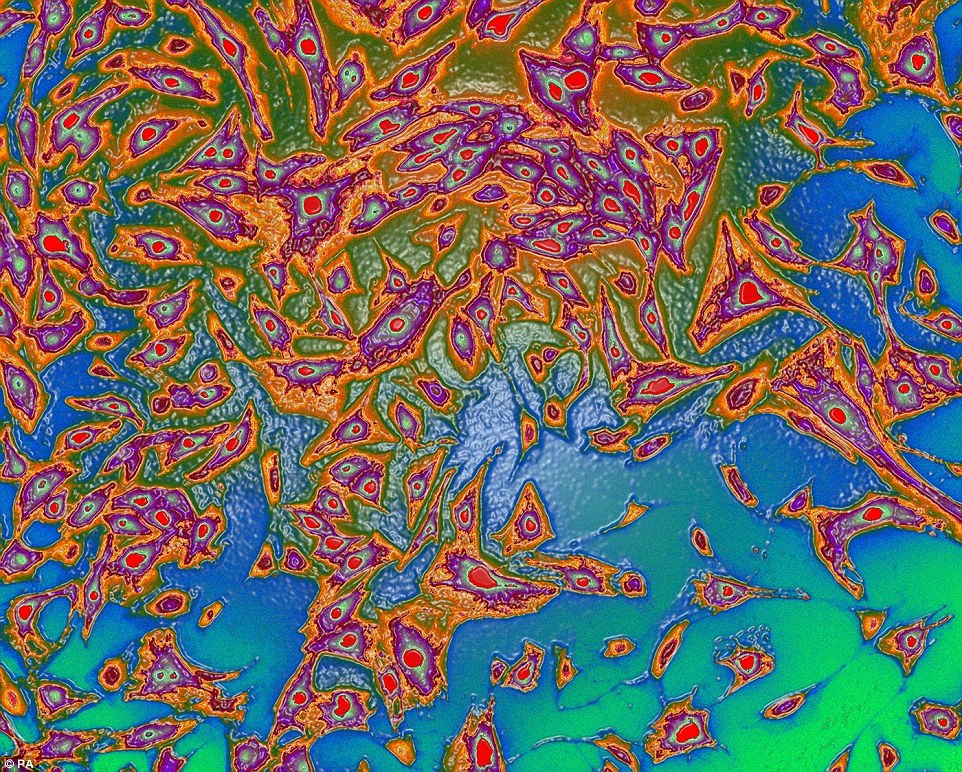 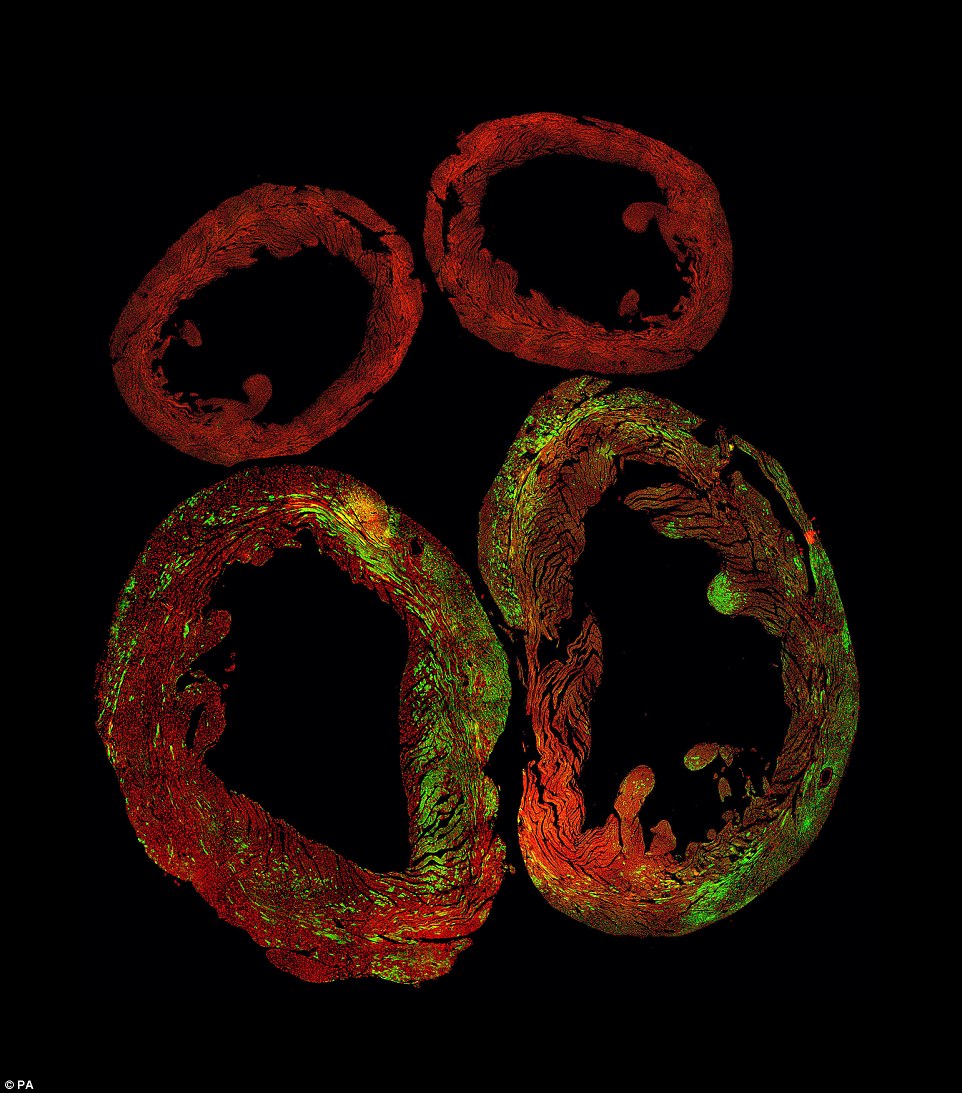 Pictured are four ventricles from a mouse heart. The researchers have used fluorescent markers to recognise certain proteins and created the image using hundreds of images assembled together 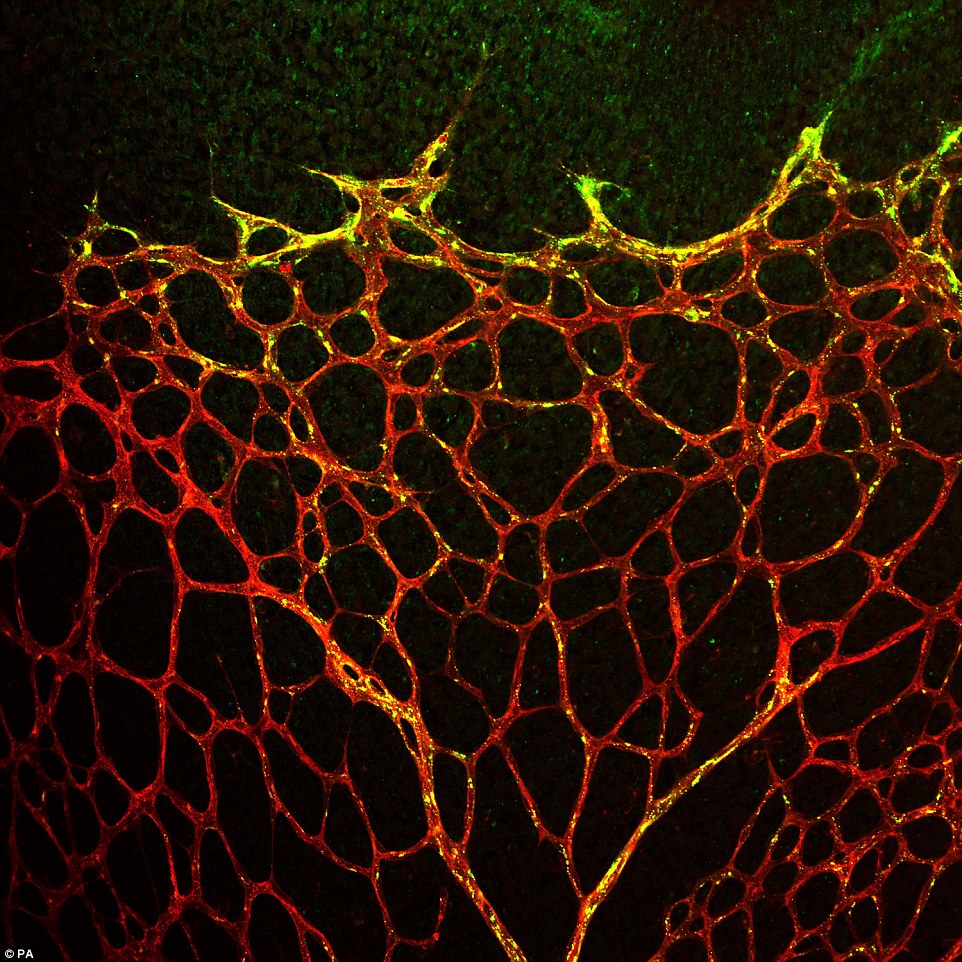 WHY DOES THE HEART NOT GET TIRED?

In a person’s lifetime, a human heart can contract billions of times.

The heart is still a muscle, much like the bicep or the hamstring, but the heart never tires.

The reason for this rather crucial detail of anatomy keeps us alive, as without a pumping heart death will shortly follow.

Hearts, although muscles, are made up of different fibres than their counterparts.

This type of fibre, known as cardiac tissue, only exists in the heart and nowhere else in the human body.

If this was to happen in the heart it would cause a heart attack.

To avoid this happening and to allow for constant use without fatigue, the cardiac tissue has a different arrangement.

Cardiac tissue has far more mitochondria which produces a huge amount more energy in the form of a chemical called Adenosine Triphosphate (ATP).

Mitochondria are small organelles within cells which are considered to be the powerhouse of the cell and convert glucose into energy inside the organelle.

Having more of these means the heart as an organ will never run out of energy under normal circumstances.

The reason this arrangement does not occur in all muscle sis the energy requirements would be enormous, and unsustainable.

The human body would simply demand more energy than it can create.

The super-high resolution image shows a normal artery at the surface of a rat’s brain and was taken with a powerful scanning electron microscope.

These ‘subarachnoid vessels’ supply blood to the brain and also act like a drain to remove toxic waste products.

Matt Macgregor’s team are trying to show that failure to remove waste by these vessels is one of the underlying causes of vascular dementia.

The researchers took the image using a technique called ‘freeze fracture’, where tissue or cell samples are frozen and then split apart to reveal the hidden layers within the sample so they can be studied in extreme detail. 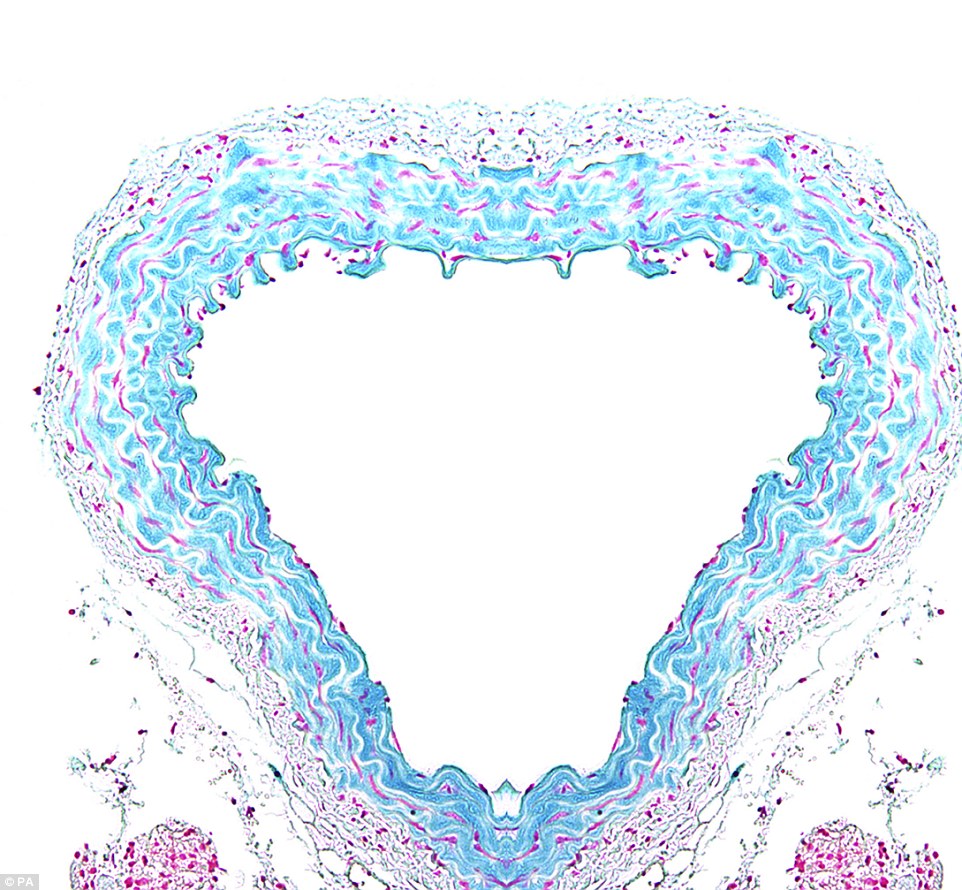 Pictured is a cross section of an artery and the different layers which make up the artery wall. The captivating images showcase the cutting-edge heart and circulatory disease research taking place across the UK thanks to BHF-funded scientists This shows a ‘Cardiac collagen web’ which is a network of the smallest blood vessels in the heart. Magenta marks the outer collagen layer of the vessels, while orange marks their inner lining and blue the cell nuclei

Sitting above the brown brain tissue, the artery appears blue, and its surrounding layer, the pia mater, is shown in purple.

One of the judges of this year’s competition, Simon Gillespie, Chief Executive Officer at the British Heart Foundation said: ‘These snapshots of science in action provide a window into the painstaking, pioneering research that’s paving the way to the next medical breakthroughs.

‘And it’s not all about the heart – this year’s competition showcases the breadth of heart and circulatory research showing blood vessels in the brain in stunning detail and the creation of platelets, the cells behind potentially deadly blood clots.

‘They showcase the ever more sophisticated technologies which allow scientists to investigate the human body in its most intricate detail. Today’s scientists are more equipped than ever to tackle heart and circulatory diseases.’ 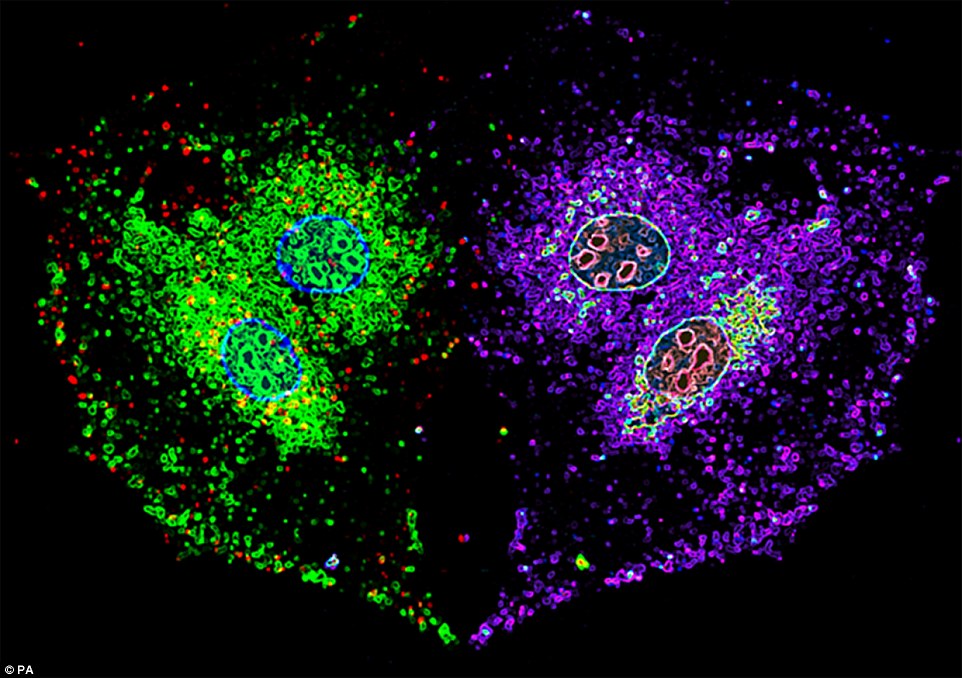 This is an ‘oxidative inkblot’, which shows one of the culprits in cardiovascular disease and an enzyme called NADPH oxidase. The enzyme is considered ‘Janus faced’ because it is important in health, as well as disease. This image shows the active enzyme in patients who have high blood pressure

Pictured is the developing blood vessel system of a two day old Zebrafish embryo. Researchers used gene enhancers (the on-off switches of genes) to switch on fluorescent markers in different types of endothelial cells that line all blood vessels

WHAT IS HEART FAILURE?

Heart failure means that the heart is unable to pump blood around the body properly. It usually occurs because the heart has become too weak or stiff.

Heart failure doesn’t mean your heart has stopped working – it just needs some support to help it work better. It can occur at any age, but is most common in older people.

Heart failure is a long-term condition that tends to get gradually worse over time. It can’t usually be cured, but the symptoms can often be controlled for many years.

The main symptoms of heart failure are:

Some people also experience other symptoms, such as a persistent cough, a fast heart rate, and dizziness.

See your GP if you experience persistent or gradually worsening symptoms of heart failure.