Camel-inspired material that mimics the way the animals control their body temperature could keep buildings, food and medicine cool in hot climates

A new material mimics the way camels control their body temperature in the desert and could keep products cool in hot climates without the need for electricity.

Scientists at MIT in the US created the transparent, doubled-layered cooling material, which cools five times longer than conventional single-layer versions.

Meanwhile, the 0.03-inch top layer of aerogel – an ultra-light, porous solid – functions like fur, insulating against outside heat while letting water vapour pass through.

A Boston-based start-up is working on ways to bring the technology to market to anticipate global energy demand for cooling, which is projected to triple by 2050. 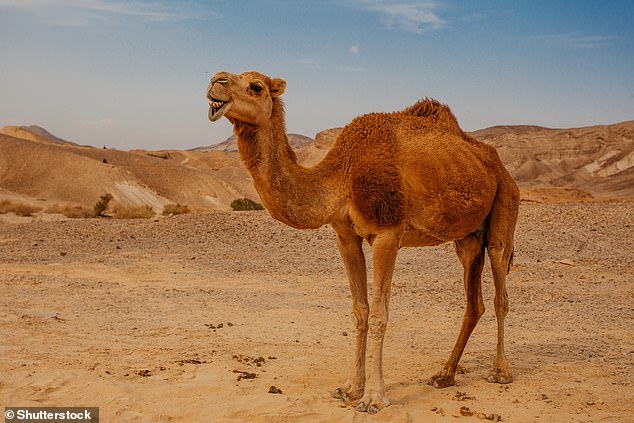 Many desert animals, such as camels and donkeys, use fur insulation not only to keep themselves warm at night but also to assist body temperature regulation during the day. Researchers from MIT have taken inspiration for their new cooling material

‘While previous passive cooling research focused on mimicking the evaporation from sweat glands in mammals, in this work we identified the crucial role of the fur insulation,’ said Jeffrey Grossman, head of the Department of Materials Science and Engineering at Massachusetts Institute of Technology (MIT).

Aerogels are among the lightest solid materials known to man.

They are created by combining a polymer with a solvent to form a gel, and then removing the liquid from the gel and replacing it with air.

Aerogels are extremely porous and very low in density.

They are solid to the touch.

This translucent material is considered one of the finest insulation materials available.

‘By mimicking the dual fur/gland system in camels, we designed an evaporation-insulation bilayer, which, like for the camel, allows for a significant extension of the passive evaporative cooling time for the same amount of water consumption.’

Cheap cooling technology that does not require external energy sources is becoming increasingly important as the climate warms, to keep buildings cool and preserve food and pharmaceuticals.

Although approaches based on evaporation from hydrogels are promising, they tend to require significant amounts of water and have limited potential for long-term use.

‘To minimise water loss while preserving the cooling power of evaporation, and therefore extend the cooling capabilities over longer periods of times, we turned our attention to nature,’ said Grossman.

It the desert, a camel’s fur acts as an insulator from the heat of the sun, keeping its skin and hump – which contains fat – cool.

This process is a bit like throwing a blanket over an ice block-packed picnic that’s in a warm environment, like the boot of a car in the summer.

The fat in the camel’s hump is crucial for the camel to burn energy and produce water, which enters the camel’s bloodstream. 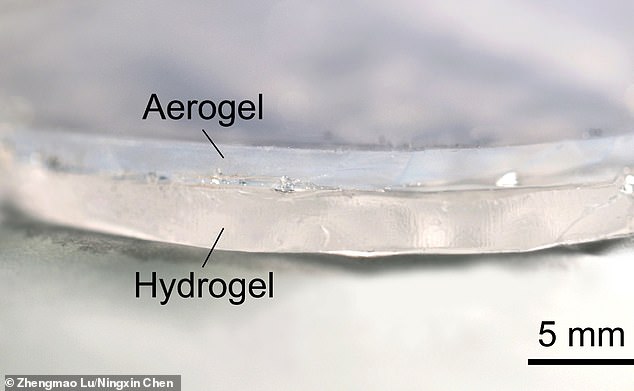 This image shows a labeled photo of a of a transparent hydrogel-aerogel cooling double layer, indicating scale and two layers

Camels use fur insulation not only to keep themselves warm at night but also to assist body temperature regulation during the day.

Camels conserve water by not sweating as much as humans, even when ambient temperatures reach 120°F (49°C).

By concentrating fatty tissue in humps on their backs, camels are able to minimise heat insulation throughout the rest of their body during the day when the temperature is high.

To mimic a camel’s fur layer, the researchers created the highly porous, hydrophobic silica aerogel with about half the thermal conductivity of air, and the sweat gland-mimicking hydrogel.

The team tested a sample of this double layer in an enclosed chamber with controlled ambient temperature and relative humidity, demonstrating that the sample could maintain a temperature 12.6°F (7°C) lower than its surroundings.

A cooling technology with only the hydrogel layer could maintain a slightly lower temperature, but the double layer lasted far longer.

The 0.03-inch layer of hydrogel covered by a 0.03-inch aerogel maintained its temperature for 200 hours before its moisture was depleted and it needed to be recharged with water, whereas a hydrogel layer alone persisted for only 40 hours. 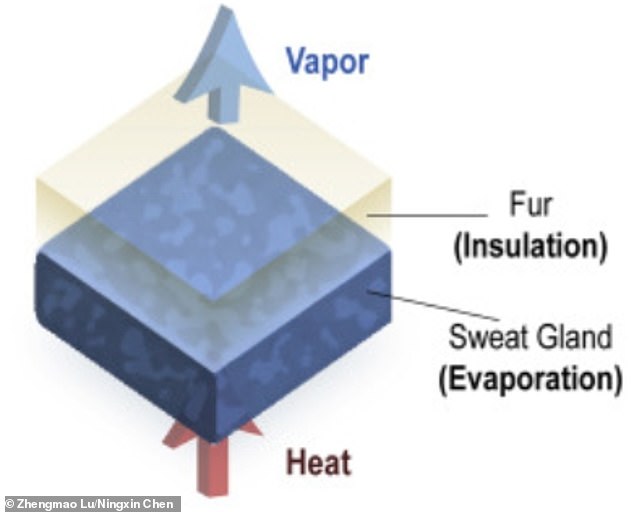 Layered design on the skin where the sweat gland enables evaporation for heat removal, and the porous fur provides insulation to reduce environmental heat gain.

This would be especially useful in regions of the world where electricity remains scarce or in developing countries that need cheap alternatives.

‘This technology could also allow for significant miniaturisation of conventional evaporation technologies, as it provides move effective cooling for longer times for any given amount of water provided,’ said Grossman.

‘It can also potentially assist thermal management of buildings where the demand for cooling has rapidly increased.’

However, the all-important aerogel layer limits the creation’s potential to be commercialised and scaled up for widespread use.

‘While the material cost of our aerogel is low, the manufacture cost is currently the bottleneck for scalability due to a critical-point drying step,’ said Grossman

One of the team, MIT graduate Elise Strobach, has co-founded a start-up company, Boston-based AeroShield, to pursue scalable production of transparent aerogels for building window applications.

The material has been detailed further in the journal Joule. 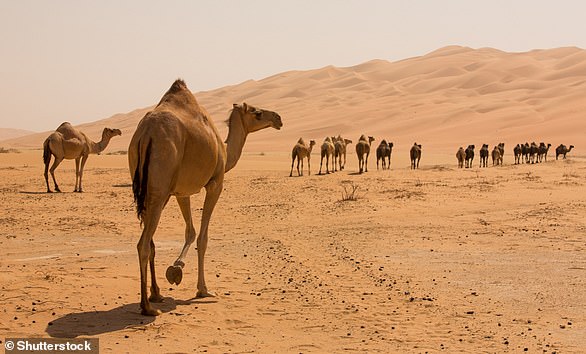 Camels have long been known for their ability to go weeks at a time without needing to drink water.

This ability that makes them particularly useful pack animals for people travelling across arid environments.

Camels are also known for their prominent humps (either one or two humps, depending on the species), which leads many people to believe that these are used to store water for access at a later time.

However, camels’ humps actually store fatty tissue, not water, which is used as a source of nourishment when food is scarce.

As the fat is burned, water is produced as one of the byproducts. This extra water enters the camel’s bloodstream to add to its water supply.

The camel’s humps also help the animal regulate its body temperature, an important feature in the desert, where temperatures can be extremely high during the day and drop drastically at night.

By concentrating fatty tissue in humps on their backs, camels are able to minimise heat insulation throughout the rest of their body during the day when the temperature is high, and their body temperature rises.

Then, at night, the extra heat dissipates through the rest of the camel’s body so that their body temperature is not too low when the temperature is cooler.