Home » Science » Can You Stop a Car With Your Hand?

“When I stick my arm out a car window, I can feel the resistance of the air. Could I slow the car down this way, eventually? How many arms would I need to brake effectively?”

Sticking your hand out the window on the highway produces a few pounds of drag on the car. The exact amount depends on how you shape your hand; spreading out your fingers creates a little more drag than holding them together. 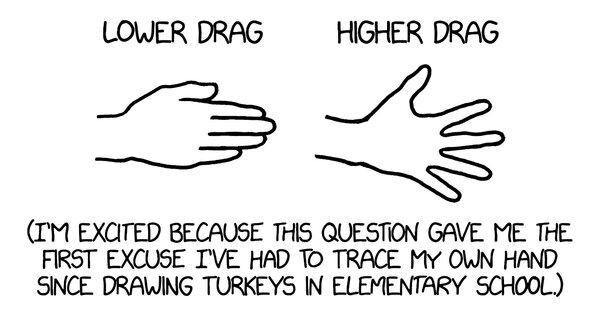 A few pounds of drag is easy to feel on your arm, but it has a fairly small effect on the car. Imagine your car is cruising along at 55 miles per hour, with the engine providing just enough power to balance out the normal air resistance and other types of mechanical friction and keep your speed constant. If you then upset the balance by sticking your hand out the window, adding a little additional drag, it would take a minute or two for that drag to cause your speed to fall from 55 miles per hour to 54 miles per hour.

The brakes on a typical car can produce a few thousand pounds of deceleration force, which is the equivalent of 1,000 or so hands sticking out of the car. I’m not sure how you could get that many hands sticking out the windows at once. If the hands are attached to people, then I have questions about your seatbelt and occupancy situation. (If the hands aren’t attached to people, I have some bigger questions.)

In place of 1,000 normal-size hands, you could try using one or two very large hands, perhaps a pair of those giant foam hands used by sports fans. At 55 miles per hour, two 15-foot-long hands would produce roughly as much drag as the car’s normal brakes.

Drag is extremely weak at low speeds, so it would be hard to come to a complete stop. A headwind could help you come to a rest more quickly, but you would be helpless if you were traveling downwind. To stop, you might find that have to resort to flapping the hands like paddles or dragging them on the ground.

One note of caution: If you do build these brakes and drive on the highway, be careful not to tilt your hands forward.