Home » Science » Chemotherapy 'is made a THIRD more effective' with nanoparticles

Chemotherapy could be up to 34 per cent more effective thanks to a new technique which combines the treatment with magnetic particles that fry cancerous cells.

Tiny magnetic nanoparticles attach themselves to the cancerous cells of a tumour and also carry the chemotherapy drug.

When doctors apply a harmless magnetic field to the area from outside the body it activates the nanoparticles’ magnetic properties and causes them to warm up, heating the trapped cancerous cells.

Research reveals this damages the tumour and makes it more vulnerable to pre-existing drugs. 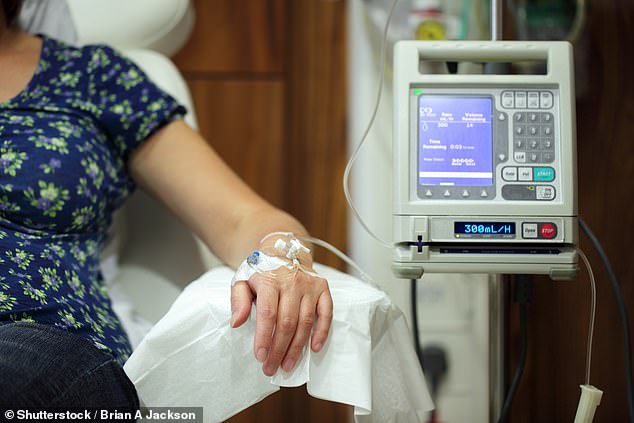 The research has so far only been tested in a lab, but researchers say the early findings are significant.

Doxorubicin — a commonly used chemo drug — was applied to the magnetic nanoparticles.

The results, which have been peer-reviewed and published in the Journal of Materials Chemistry B, show promising results for the experimental method.

Heat and doxorubicin together killed 98 per cent of brain cancer cells after 48 hours. The drug only killed 73 per cent of cells when applied without heat.

For the breast cancer cells, 89 per cent of the cancer was eliminated by the combination, and this drops to just 77 per cent for the drug alone.

‘While this combination of therapy is already approved for the treatment of fast-growing glioblastomas, our results suggest it has potential to be used more widely as a broad anti-cancer therapy.

‘This therapy also has potential to reduce the side effects of chemotherapy, by ensuring it is more highly targeted on cancer cells rather than healthy issue. This needs to be explored in further pre-clinical tests.’

WHY CAN CHEMO FAIL TO WORK?

Cancer cells may figure out how to resist chemotherapy.

There are several reasons this may happen.

The cells that are not killed may mutate and change in response, repair the DNA damaged by the drug or develop a mechanism that renders it useless.

Therefore, the drugs’ success often relies on the failure of the cancer cell’s repairing mechanisms.

Cancer cells may produce hundreds of copies of a particular gene, known as gene amplification, triggering an overproduction of a protein which stops the effectiveness of treatment.

Cancer cells are sometimes able to push the drug out of itself, using a molecule called p-glycoprotein.

Because chemotherapy is the first line of treatment, it is a major concern when it fails to work.

Professor Workman chief executive of The Institute for Cancer Research, said: ‘Cancer’s ability to adapt, evolve and become drug resistant is the cause of the vast majority of deaths from the disease and the biggest challenge we face in overcoming it.’