Mysterious inscriptions discovered in an Alabama cave have FINALLY been decoded, revealing details of a sacred lacrosse-like game carved into ‘talking stones’ 200 years ago during Cherokee rituals

In a rare discovery in Alabama, scientists have stumbled upon a set of cave inscriptions that are thought to be written in the ancient Cherokee language.

The inscriptions, which likely date back to 1828, were found deep in Fort Payne, Alabama’s Mantiou Cave and describe sacred rituals like the sport of stickball in amazingly rich detail.

Scholars published their translations today in the journal Antiquity, which they believe were left by the spiritual leader of a team playing a game of stickball, often referred to as ‘the little brother of war,’ that’s similar to lacrosse. 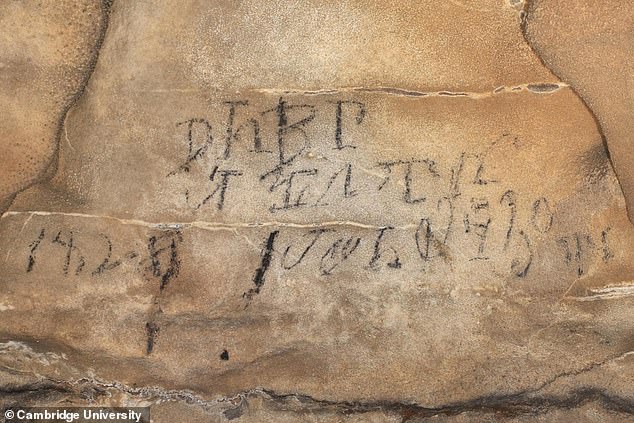 Scientists discovered a Cherokee syllabary inscription deep inside a cave located in Alabama. Pictured is one of the inscriptions, which translates to ‘leaders of the stick ball game’

Amazingly, two of the inscriptions they discovered were signed by Richard Guess, one of Cherokee scholar Sequoyah’s sons.

Sequoyah was the mastermind behind the Cherokee written language, or syllabary, which was developed in the early 1800s and adopted by the tribe in 1825.

Although Sequoyah designed the syllabary to appear similar to the English language, it was often used a means for Cherokee to communicate covertly while under invasion by whites.

The inscriptions ‘reveal evidence for secluded ceremonial activities at a time of crisis for the Cherokee,’ the researchers said.

‘Although the Cherokee were forcibly removed from Alabama, their words on the walls of Manitou Cave endure,’ they added.

The word ‘their’ is in reference to the Euro-Americans and their calendar. 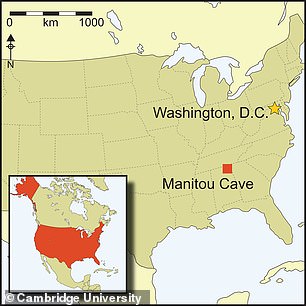 Stickball involved far more than just a lacrosse match, according to the scientists.

‘It is a ceremonial event that often continues over days, focusing on competition between two communities who, together, “epitomise the spirit and power of the people and their ancestors,”‘ the researchers said.

‘Each team undergoes ritual preparation in private before the game, and access to purifying sacred waters is necessary.

‘This is the event recorded on the walls of Manitou Cave—the ballgame players preparing themselves spiritually for the game and cleansing themselves in the secluded subterranean waters,’ they added.

Not only did the inscriptions document the Cherokee sport of stickball, but they also underscored that caves were ‘spiritually potent’ places for the tribe, as well as many other groups.

‘These were sacred spaces rather than “art galleries,” the study noted. ‘This may be relevant to cave art around the world.’

Some of the inscriptions were written backwards on the ceiling of the cave, in an attempt to communicate with spiritual beings. 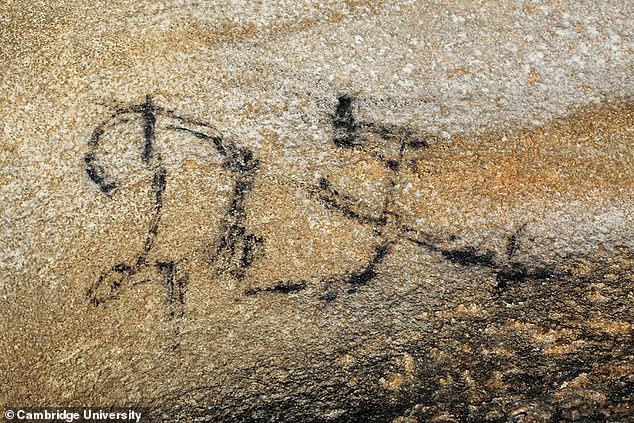 Pictured is an inscription of Cherokee syllabary on a wall in the Manitou Cave. Two of the inscriptions were signed by Richard Guess, one of Cherokee scholar Sequoyah’s sons 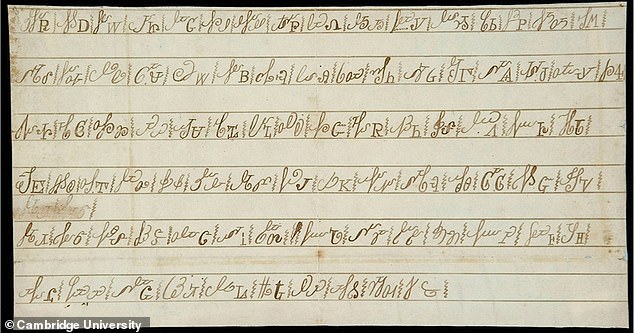 The Cherokee written language was developed in the early 1800s by the scholar Sequoyah. Pictured is syllabary in Sequoyah’s hand writing, which he designed to look similar to English

WHAT WAS THE SIGNIFICANCE OF THE  MANITOU CAVE? 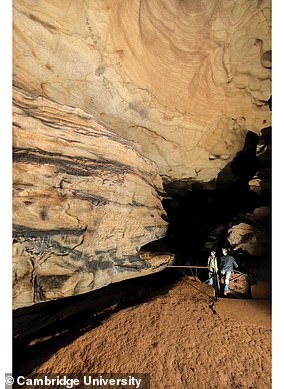 Researchers say inscriptions discovered deep in an Alabama cave reveal cavernous sites such as Manitou were seen as ‘spiritually potent places’ by the Cherokee people.

In the Manitou caves and others, the walls were adorned with inscriptions, which were where considered to be ‘appropriate in the context of ceremonial action,’ the researchers say.

Similar cave drawings have been observed in the American Southwest dating back thousands of years.

The newly-decoded inscriptions ‘reveal evidence for secluded ceremonial activities at a time of crisis for the Cherokee,’ researchers said.

‘Although the Cherokee were forcibly removed from Alabama, their words on the walls of Manitou Cave endure,’ they added.

One of the inscriptions read ‘I am your grandson,’ likely addressing the ‘Old Ones,’ or Cherokee ancestors, researchers said.

‘While Old Ones can include deceased Cherokee ancestors, they can also comprise other supernatural beings who inhabited the world before the Cherokee came into existence,’ the researchers explained. 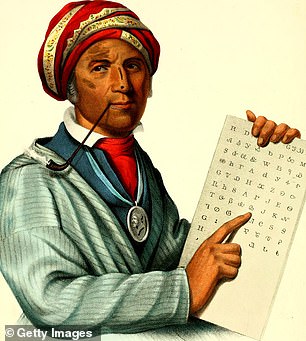 Prior to the researchers discovering them, it’s believed that they had gone unnoticed for almost 200 years.

‘People had probably been looking at and passing by this for years, but they just didn’t know what they were looking at,’ Beau Duke Carroll, a Cherokee and lead author of the study, told the Washington Post.

Jan Simek, an anthropologist at the University of Tennessee in Knoxville and co-author of the study, said the newfound inscriptions give a rare voice to the Cherokee in their own words.

‘This puts a definitive face on the use of syllabary and it shows us — in their own words — what the Cherokees of that time were doing,’ Simek told the Post.

‘For archaeologists, that’s a remarkable outcome because you’re usually interpreting symbols or words. But here they are telling us, “We were practicing in our old ways — look.”‘