Children may use make-believe fighting and killing during playtime as a way to rehearse strategies for dealing with bad-tempered peers, study reveals

Most children have wild imaginations, but sometimes pretend play takes a turn and the once wholesome act takes on a violent theme.

Although some parents may be concerned when their child make-believes fighting and killing, a new study suggests it is actually their way of ‘rehearsing’ for a real-world scenario.

Researchers from the University of Cambridge found the pretend aggression tend to surface when a child’s playmate is considered to be bad-tempered by their peers.

The team speculates that these scenarios arise in an attempt to stop playmates becoming angry by giving them a pretend situation in which to ‘let off steam’, or simply to keep them playing by appealing to their nature. 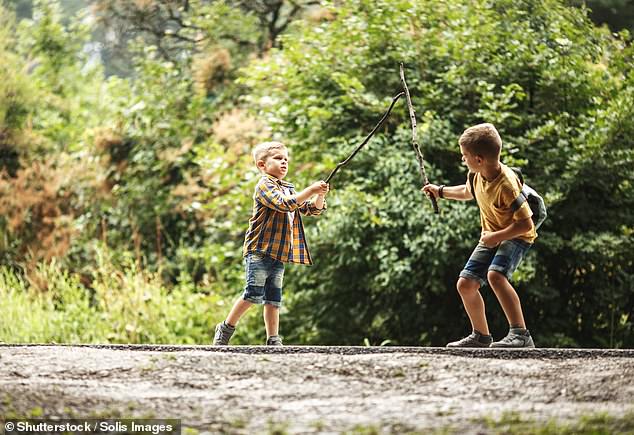 Although some parents may be concerned when their child make-believes fighting and killing, a new study suggests it is actually their way of ‘rehearsing’ for a real-world scenario. Researchers from the University of Cambridge found the pretend aggression tend to surface when a child’s playmate is considered to be bad-tempered by their peers

Researchers observed more than 100 children in China while they were at school – all of which were asked to play in pairs.

Children partnered with another that was deemed to be bad-tempered by their peers were 45 percent more found to introduce aggressive themes while playing than those with partners who are known to control their aggression.

However, the team found that the child’s temperament did not set the stage for level of pretend aggression.

These children took it upon themselves to introduce the theme during playtime, which the researchers say suggest certain cases aggressive make-believe play actually helps children’s social and emotional development.

Dr Zhen Rao, from the University of Cambridge, said: ‘If children have a friend who is easily angered, and particularly if they haven’t coped well with that behavior, it’s possible that they will look for ways to explore it through pretend play.’

‘This gives them a safe context in which to try out different ways of handling difficult situations next time they crop up in real life.’

For a second part of their investigation, the team set out to ‘understand how far aggressive pretend play is associated with a play partner’s anger expression,’ researches shared in a statement. 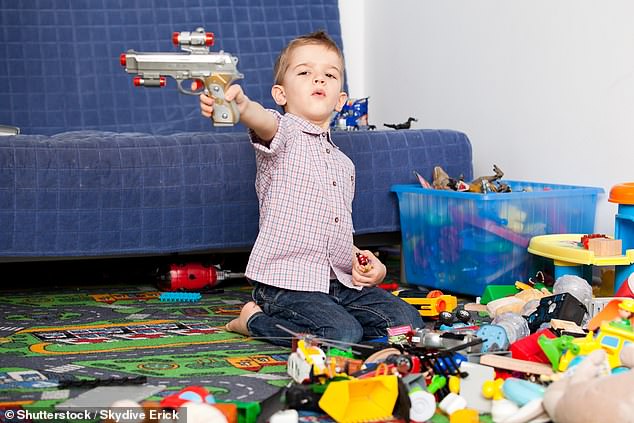 The team speculates that these scenarios arise in an attempt to stop playmates becoming angry by giving them a pretend situation in which to ‘let off steam’, or simply to keep them playing by appealing to their nature

‘It also distinguished between aggressive pretend play and its ‘non-aggressive, negative’ variant: for example, pretend play that involves imagining someone who is sick or unhappy.’

Another group of 104 children at a school in China were asked to pair up with another classmate, which most chose a friend for this activity.

Each group was given toys, but none were modeled after weapons, and children were told they could play with them however they prefer – all were recorded playing for a total of 20 minutes.

Separately, they also asked peers to rate the children’s tendency to become angry. Each of the 104 children in the study was rated by, on average, 10 others, who were asked to decide whether they were good at keeping their temper, easily angered, or ‘somewhere in between’.

The results showed that, on average, pretend play was conducted just about a fifth of the recorded session.

Pretend play was observed in all children.

And the team found that the children’s own ability to control their temper, as noted by their peers, did not predict how much aggression was brought into pretend play.

However, if a child was playing with someone considered to be bad-tempered, they were 45 percent more likely to imagine a scenario with a violent element.T

here was no evidence to suggest that either child’s temperament influenced the frequency of non-aggressive, negative pretend play.

The researchers also found that boys were 6.11 times more likely to engage in aggressive pretend play than girls.

The team theorizes it may represent an attempt to stop playmates becoming angry by giving them a pretend situation in which to ‘let off steam’, or simply to keep them playing by appealing to their nature.

‘Further research is clearly needed to help us better understand this in different social contexts.’

‘The possibility that children might be working out how to handle tricky situations through pretend play suggests that for some children, this could actually be a way of developing their social and emotional skills.’

Parents who are overprotective are sometimes referred to as ‘helicopter parents’.

They earned this stereotype for being perceived as relentlessly hovering over their children, trying to micro-manage their affairs.

The first use of the term is widely attributed to Dr Haim Ginott’s 1969 book Parents & Teenagers.

In it, teens said their parents would hover over them like a helicopter.

The term became popular enough to become a dictionary entry in 2011.

Helicopter parents pay extremely close attention to their children to try to protect them from failure, rejection and injury.

They want ‘happy’ children and often believe that teachers should pay attention to their children in the same overprotective way.

This approach has sparked controversy, with some experts arguing that in order for children to become well adjusted, they need to experience a full range of emotions.

The ‘helicopter’ parent rushes in to help rather than allowing their child to have a go at managing a challenging situation themselves.

Some experts say that this can lead to children who are unable to cope with even minor issues, as they are never given the opportunity to fail and then learn from their mistakes.

However, some experts suggest that such ‘pushy’ parenting may provide children with benefits in later life.

Among them is Dr Matthias Doepke, a professor of economics in the Weinberg College of Arts and Sciences at Northwestern University.

He argues that the intensity of parenting has gone up in many countries in line with rising inequality.