A coronavirus vaccine made by a Beijing-based state-owned pharmaceutical firm is 86 per cent effective at preventing infection, according to UAE officials.

The vaccine, made by a company called Sinopharm, is one of four being developed by China and is being tested in the Arab nation.

The vaccine has been undergoing third-phase trials in the Emirates since July, and it was approved for emergency use for healthcare workers in September.

Dubai ruler Sheikh Mohammed bin Rashid Al-Maktoum said in November that he had received an experimental coronavirus vaccine, but there was no announcement on which jab he received.

In a statement released today, the UAE ‘announced the official registration’ of the vaccine. It remains unclear if the country will now roll out a mass vaccination programme to its residents.

Sinopharm said last month that nearly a million people had taken its vaccine candidate, and one of the four Chinese jabs was provided to North Korean leader Kim Jong Un and his family.

No data has been released on the clinical trials of the vaccine to support the claims of the Chinese vaccine’s effectiveness. 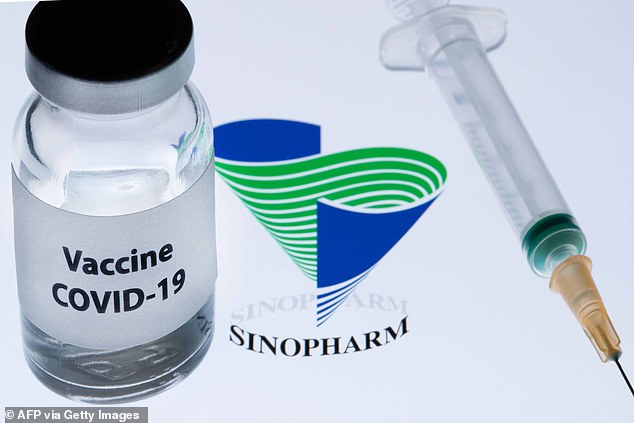 The vaccine, made by a company called Sinopharm, is one of four being developed by China and is being tested in the Arab nation and UAE health officials today claimed it is 86 per cent effective 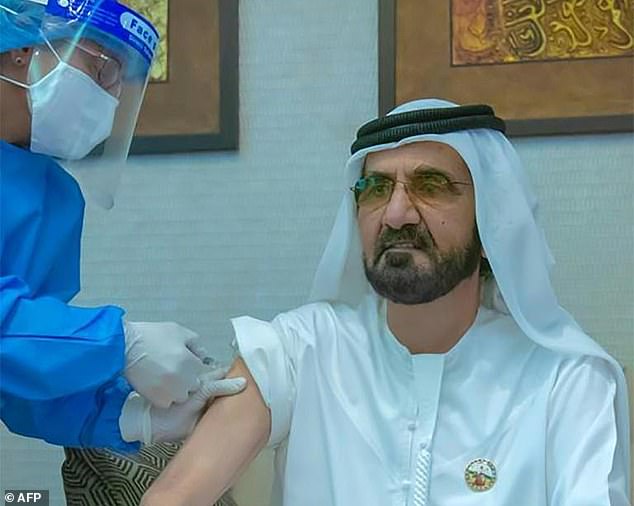 Two vaccines have undergone third-phase trials in the UAE, the Sinopharm project and Russia’s Sputnik-V, named after the Soviet-era satellite.

The Russian vaccine is also shrouded in mystery and has dubious scientific process, with no data released. Russia claims the vaccine, which has been rolled out to frontline workers this week, is more than 90 per cent effective.

UAE health officials say they have reviewed Sinopharm’s interim analysis of the third-phase trials which shows it is 86 per cent effective against coronavirus.

‘The announcement is a significant vote of confidence by the UAE’s health authorities in the safety and efficacy of this vaccine,’ news site WAM said.

‘The analysis also shows the vaccine to have 99 per cent seroconversion rate of neutralising antibody and 100 percent effectiveness in preventing moderate and severe cases of the disease,’ it adds.

China, with a population of around 1.4billion people, was forced to setup vaccination trials overseas due to coronavirus case numbers being too low in the country.

As a result, it set up trials in the UAE and nine other nations experiencing larger outbreaks. Morocco is believed to be planning on using the Sinopharm vaccine to kickstart its vaccination plan, according to AP.

China has provided North Korean leader Kim Jong Un and his family with an experimental coronavirus vaccine, a US analyst said on Tuesday.

It was unclear which company had supplied its drug candidate to the Kims and whether it had proven to be safe, he added.

China has been vaccinating essential workers with Covid-19 vaccine candidates under an emergency scheme launched in July with no reported adverse effects, according to the officials.

In October, a city in eastern China began offering its residents an experimental coronavirus vaccine for £46 per person.

Sinopharm, a state-owned Chinese drug firm, said last month that nearly a million people had taken its vaccine candidate, despite the jab had not yet provided any clear clinical evidence of efficacy.

According to the US analyst, Beijing has recently offered the jab to the North Korean leader and his family.

Sinopharm’s vaccine uses a weakened form of SARS-CoV-2, the virus which causes Covid-19, to confer immunity.

This method is a traditional approach which has long been used in vaccination programmes, including the MMR and chickenpox jabs.

One benefit of this approach is that they only need to be stored in a fridge  and can be easily distributed.

In contrast, the Pfizer/BioNTech vaccine being administered across the UK following last week’s MHRA approval must be stored long-term at -70°C.

This is because the vaccine is based on mRNA, a messenger molecule which instructs cells to pretend to be the virus, tricking the body into an immune response.

The Pfizer/BioNTech jab is the first mRNA vaccine to ever be approved for human use and experts are being cautious with its storage conditions to ensure shelf-life longevity.

This approach is novel compared to the use of an attenuated virus and the technique is believed to be better at protecting patients, with the latest data indicating 95 per cent effectiveness.

Pfizer and BioNTech were in close contact with drug regulators, such as the FDA in the US and the MHRA in the UK, throughout the vaccine development process, constantly handing over data to speed up the approval process.

The AstraZeneca/Oxford vaccine, which uses a modified form of a chimp adenovirus, yesterday published its peer-reviewed phase three results in the prestigious medical journal the Lancet. It has overall vaccine efficacy of 70.4 per cent.

These measures were designed to boost transparency and ensure as much scrutiny as possible while also building trust in the public.

However, Chinese drugmakers have not released any data on their vaccines’ safety or efficacy.

The only available data comes from the UAE, which states 31,000 volunteers were involved in the trial.

But there is no available information on how many received a jab, the length of time the researchers followed the participants, how many people from both the vaccine and placebo group were infected or potential side-effects.

Sinopharm is also working on another vaccine alongside experts from the Wuhan Institute of Biological Products.

However, Sinopharm as well as Sinovac have pre-orders for less than 500 million doses as of mid-November, according to data from London consultancy Airfinity. The majority of thee come from countries that have participated in trials.

The great communist Covid cover-up: Chinese doctors were recording at least DOUBLE the number of coronavirus cases that Beijing was reporting

China under-reported its coronavirus cases and deaths by up to half during the early stages of the pandemic, leaked documents have revealed.

Beijing has long been accused of under-reporting its coronavirus numbers, but the data gives an idea of the scale of the problem for the first time.

For example, on February 10 China reported 2,478 new cases of the virus across the entire country – but leaked data shows that, on the same date, Hubei province alone logged 5,918 cases.

Meanwhile on March 7, Hubei was officially reporting a cumulative death toll of 2,986, but documents show it actually stood at 3,456.

The official figures, which were reported across the world, downplayed the severity of the outbreak at a time when world leaders were trying to devise their own response strategies – leaving many unprepared for what was to come.

China was able to use the figures and its authoritarian powers to lock down hard and early, all-but wiping the virus out and meaning its economy has grown this year, while under-prepared western democracies have seen their economies devastated.