The collapse in the walrus tusk trade triggered an economic crisis for early Viking colonists in Greenland that led to the downfall of its settlements and churches, according to new research.

Early settlers in Greenland enjoyed a ‘near monopoly’ on the supply of ivory from walrus tusks to Europe for more than 200 years.

Researchers said this demand for luxury goods produced from ivory may have helped far-flung Norse communities in Greenland survive for centuries and allowed the colonists to build thriving communities and buildings.

According to new research, the bubble burst because elephant tusks became more popular than those from walruses. The arrival of the Black Death in the same period meant people were less likely to invest in luxury products, scientists say. 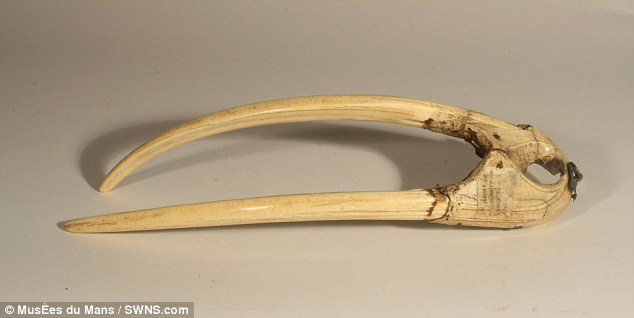 Early Viking colonists in Greenland had a ‘near monopoly’ on the supply of ivory from walrus tusks to Europe for more than 200 years, according to new research. Pictured is a walrus rostrum (upper jaw bone) with tusks that was used in the study

The Icelandic Sagas tell of Erik the Red who fled to south west Greenland after being exiled for murder in the late 10th Century and established the first Norse settlement there.

By the mid-12th Century there were two major settlements with a population of thousands and Greenland even gained its own bishop.

But by the end of the 15th Century the Norse of Greenland had vanished – leaving only abandoned ruins and an enduring mystery.

Previous theories regarding why the communities collapsed include a change in climate and an adherence to failing farming techniques.

Some have suggested that trading commodities – notably walrus tusks – with Europe may have been vital to sustaining the residents of Greenland.

Ornate items such as crucifixes and chess pieces were fashioned from walrus ivory by craftsmen of the age.

But the source of this ivory has never been empirically established.

Now researchers from Cambridge University and Oslo University in Norway have studied ancient DNA from off-cuts of tusks and skulls.

Most were found on the sites of former ivory workshops across Europe in order to trace the origin of the animals used in the medieval trade.

In doing so, the researchers discovered an evolutionary split in the walrus, and revealed that the Greenland colonies may have had a ‘near monopoly’ on the supply of ivory to Western Europe for over 200 years.

For the study, published in the journal Proceedings of the Royal Society B, the researchers analysed walrus samples found in several medieval trading centres – Trondheim, Bergen, Oslo, Dublin, London, Schleswig and Sigtuna. 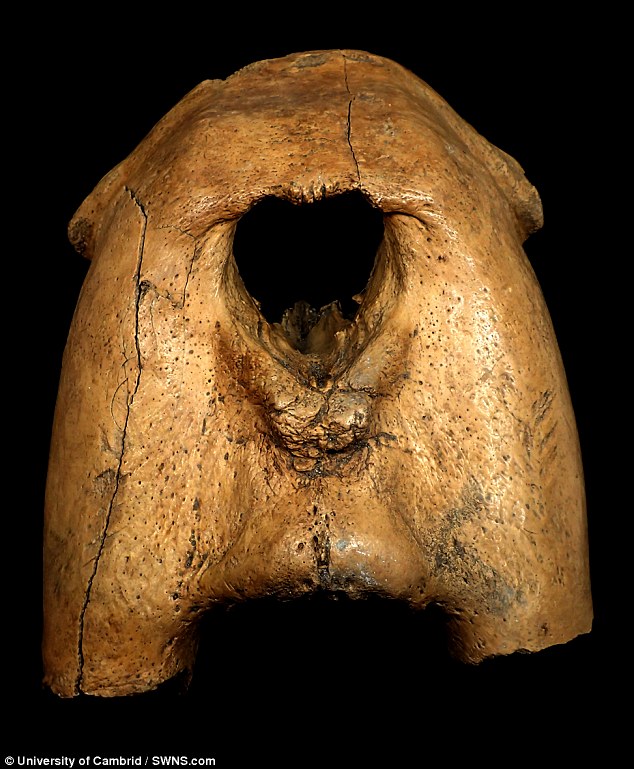 Pictured is an upper jaw bone found during excavations in Bergen, Norway. The DNA showed that during the last Ice Age the Atlantic walrus was divided into two ancestral lines, which researchers term ‘eastern’ and ‘western’

The DNA showed that during the last Ice Age the Atlantic walrus was divided into two ancestral lines, which researchers term ‘eastern’ and ‘western’.

Walruses of the eastern lineage are widespread across much of the Arctic, including Scandinavia.

But those of the western are unique to the waters between western Greenland and Canada.

Finds from the early years of the ivory trade were mostly from the eastern lineage.

But as demand grew from the 12th Century onwards, the researchers discovered Europe’s ivory supply shifted almost exclusively to tusks from the western lineage.

They say that from western linage walruses must have been supplied by the Norse Greenlanders, by hunting and perhaps also by trade with the indigenous people of Arctic North America.

Study co-author Dr James Barrett, of Cambridge Univesity’s Department of Archaeology, said: ‘The results suggest that by the 1100s Greenland had become the main supplier of walrus ivory to Western Europe – a near monopoly even.

‘The change in the ivory trade coincides with the flourishing of the Norse settlements on Greenland. The populations grew and elaborate churches were constructed. 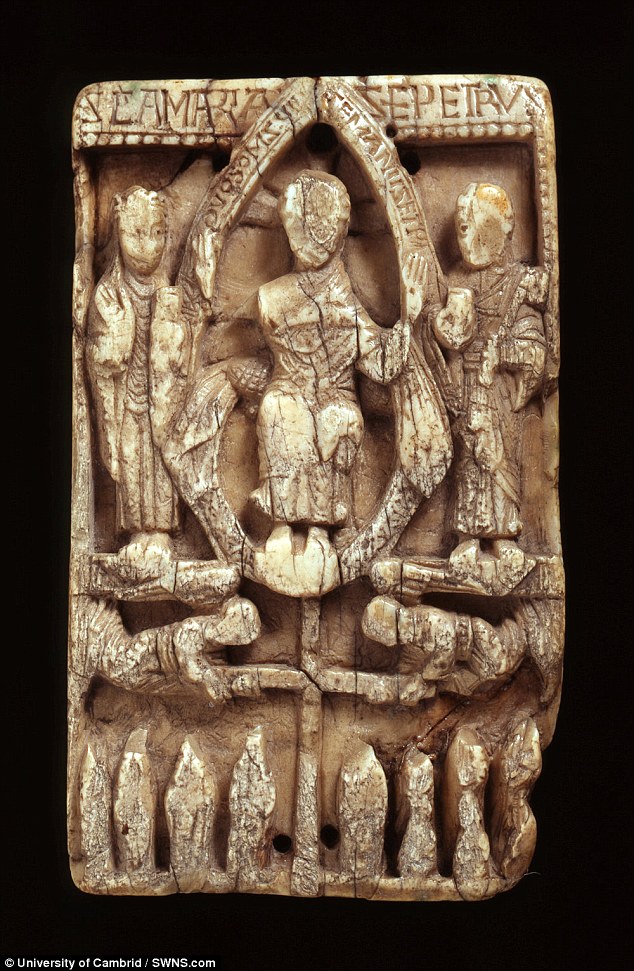 Walruses of the eastern lineage are widespread across much of the Arctic, including Scandinavia. But those of the western are unique to the waters between western Greenland and Canada. Pictured is an example of an elaborately-carved ecclesiastical walrus ivory plaque from the beginning of the medieval walrus ivory trade

‘Later Icelandic accounts suggest that in the 1120s, Greenlanders used walrus ivory to secure the right to their own bishopric from the king of Norway.

‘Tusks were also used to pay tithes to the church.’

Dr Barrett said the 11th to 13th Centuries were a time of demographic and economic boom in Europe, with growing demand from urban centres and the elite served by transporting commodities from increasingly distant sources.

He said: ‘The demands for luxury goods produced from ivory may have helped the far-flung Norse communities in Greenland survive for centuries.’

Co-author Dr Sanne Boessenkool, of the University of Oslo, said: ‘We knew from the start that analysing ancient DNA would have the potential for new historical insights, but the findings proved to be particularly spectacular.’

Dr Barrett said their findings tells us less about the end of the Greenland colonies, but the researchers noted that it is hard to find evidence of walrus ivory imports to Europe that date after 1400.

WHAT WERE THE VIKING VOYAGES OF DISCOVERY?

The Vikings made many many voyages of discovery during their history, including stops across Europe and North America.

840AD Viking settlers found the city of Dublin in Ireland

866AD York is captured by a Viking army

1002AD Leif Ericsson, son of Erik the Red, explores the coast of North America, named them Karland, Helluland and Vinland

Dr Barrett said: ‘Changing tastes could have led to a decline in the walrus ivory market of the Middle Ages.’

But he said ivory exports from Greenland could have stalled for other reasons such as over-hunting; the ‘Little Ice Age’ – a sustained period of lower temperatures which began in the 14th Century; and the Black Death plague which ravaged Europe.

Dr Barrett added: ‘An over reliance on a single commodity, the very thing which gave the society its initial resilience, may have also contained the seeds of its vulnerability.’

He said tusks were exported still attached to the walrus skull and snout, which formed a neat protective package that was broken up at workshops for ivory removal. These remains allowed the study to take place, as DNA extraction from carved artefacts would be far too damaging.

Co-author Dr Bastiaan Star of the University of Oslo, added: ‘Until now, there was no quantitative data to support the story about walrus ivory from Greenland.

‘Walruses could have been hunted in the north of Russia, and perhaps even in Arctic Norway at that time.

‘Our research now proves beyond doubt that much of the ivory traded to Europe during the Middle Ages really did come from Greenland.’