Comet Leonard soars behind the plume from NASA’s James Webb Space Telescope launch, as the bright green iceball passes by Earth for the first time in 70,000 YEARS

NASA has shared a stunning photo of Comet Leonard soaring behind the plume from NASA’s James Webb Space Telescope launch.

The incredible shot, which is featured as NASA’s Astronomy Picture of the Day, was taken from Thailand and shows a pagoda in Doi Inthanon National Park in the foreground.

The James Webb Space Telescope launched on Christmas Day, and is currently on a million mile journey to solar orbit, which is expected to take around a month.

Meanwhile, Comet Leonard, which was only discovered in January, is in the midst of making its closest approach to Earth in 70,000 years. 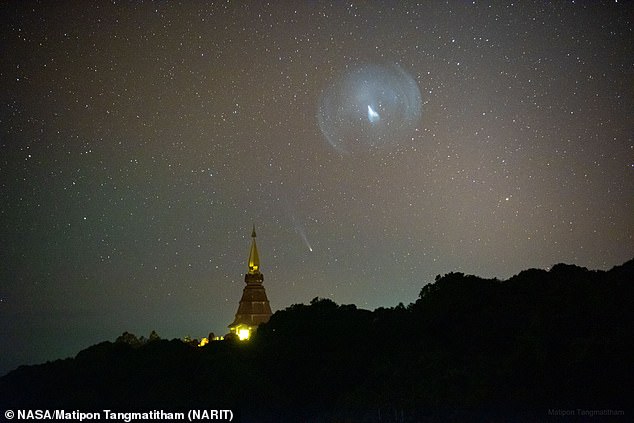 Catalogued as C/2021 AI, comet Leonard is named after the astronomer that first discovered it.

This was a year before it hit perihelion (the closest approach to the sun).

This will be its last orbit as it is on a hyperbolic trajectory, meaning it will leave the solar system after its close approach to our host star.

NASA explained: ‘Which one of these two streaks is a comet? Although they both have comet-like features, the lower streak is the only real comet.

‘This lower streak shows the coma and tail of Comet Leonard, a city-sized block of rocky ice that is passing through the inner Solar System as it continues its looping orbit around the Sun.’

Comet Leonard recently made its closest approach to Earth, and will round the Sun next week.

‘The comet, still visible to the unaided eye, has developed a long and changing tail in recent weeks,’ NASA explained.

‘In contrast, the upper streak is the launch plume of the Ariane V rocket that lifted the James Webb Space Telescope (JWST) off the Earth two days ago.’

Comet Leonard’s closest pass of the the Sun, on January 3, 2022 will take it within 56 million miles of our star, which is about half the distance between Earth and the Sun.

If it doesn’t disintegrate on its way to the Sun, then Comet Leonard’s trajectory will fling it into interstellar space, never to return.

But according to scientists, it may already be splitting up less than a year after it was first discovered, or it will begin to split up soon.

When a comet’s orbit brings it close to the Sun, it heats up and spews dust and gases into a giant glowing head larger than most planets.

Comets – also called ‘cosmic snowballs’ or ‘icy dirtballs’ – are conglomerations of frozen gas, dust and ice left over from the formation of the solar system.

They go around the Sun in an orbit that’s highly elliptical, meaning they’re not perfectly circular, and can spend hundreds and even thousands of years in the darkest depths of the Solar System before returning for their ‘perihelion’.

But Comet Leonard has a hyperbolic orbit, meaning once it passes the Sun it will be ejected out of the Solar System and never seen again by Earthlings.

Comet Leonard likely spent about 35,000 years coming inbound from about 323 billion miles (520 billion km) away and may have last visited the inner solar system about 70,000 years ago.

Comet Leonard made its closest approach to Earth on Sunday, December 12, prior to its perihelion on January 3.

The comet has a green tail because its icy rock interior heats up the closer it gets to the Sun, first emitting a blue dust, then yellow or white and finally green.

When it turns this teal colour, it means the comet is warm, contains lots of cyanide and diatomic carbon and the potential for it to break up is at its highest.