Fossilised eye of a tiny ancient sea creature that lived 429 million years ago is ‘almost identical’ to that of a modern bee, study finds

The fossilised eye of an extinct sea creature that lived 429 million years ago has been analysed by scientists for the first time.

The analysis reveals it is similar to the sight organ of some modern-day animals, such as dragonflies, bees and crustaceans.

The prehistoric peeper belonged to a hard-shelled arthropod called a trilobite (Aulacopleura kionickii).

It was unearthed near Lodenice in the Czech Republic in 1846 but has never been analysed in fine detail until now. 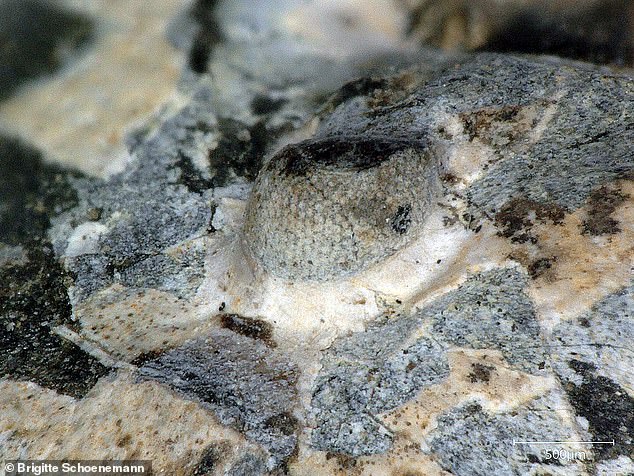 Pictured, the fossilised compound eye of the specimen which is about 1cm long and was first discovered in Czech Republic in 1846 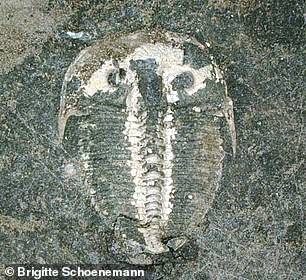 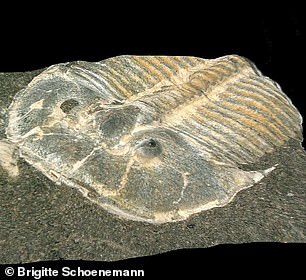 Pictured, the trilobite Aulacopleura kionickii. The preserved compound eye of the animal was similar to that of modern-day species, such as dragonflies, bees and crustaceans

‘The findings suggest the principles of vision in many insects and crustaceans today are at least half a billion years old.’

The flat, half-inch long fossil had two bulging semi-oval eyes on the back of its head – one of which had broken off.

Analysis of the fossilised remains reveals the ancient creature named Aulacopleura koninckii had a primitive form of compound eye.

It consisted of tiny visual cells, called ommatidia, just like those seen in bees today.

Dr Schoenemann added: ‘Trilobites are extinct arthropods that dominated the palaeozic faunas of the oceans, half a billion years ago and a bit later.

‘The internal structure of this eye is almost identical to that of modern bees, dragonflies, crustaceans and many other day active arthropods living today.’

Previous research has found modern insects see in more detail than was once believed.

Scientists from the University of Sheffield found the insect eyes have thousands of receptors that make up the net-like ‘compound eyes’ and they rapidly move in and out of focus as they sample the world around them.

This rapid ‘twitching’ is so fast it cannot be seen with the naked eye, and helps to provide the insects with ‘hyperaccurate vision’, the researchers said.

The findings show the optical organ has changed remarkably little over 500 million years – and reveal how Aulacopleura saw the world around it.

They contained light-detecting cells wound around a transparent tube called a rhabdom.

The study published in Scientific Reports sheds fresh light on the lifestyle of Aulacopleura.

Dr Schoenemann said: ‘It was probably active during the day, as smaller diameter lenses are efficient at capturing light under bright conditions.

‘The small size of its visual units indicates it lived in bright, shallow waters. It probably lived around the shore.

‘The little creature is about half an inch long and a third of an inch wide – and just 2-3mm high. It has a very, very thin shell.

‘It has been a bottom dweller, gliding over the ground of the seas, eating organic material and other useful things it found.’

She and co-author Dr Euan Clarkson, of the University of Edinburgh, scanned the ‘excellently preserved’ Aulacopleura fossil using digital microscopes.

It existed at a similar time to the newly-studied trilobite and its remains were uncovered on the Scottish Island of Kerrera.

After analysing the petrified insect, a team of scientists determined that the ancient creatures left lakes to live in complex forest ecosystems in just 40 million years.