Researchers from North Carolina State University in the US created the yellowish gel, which contains spermicidal, anti-viral and libido-enhancing agents.

When tested in a rat model, the gel both enhanced male libido and prevented pregnancy in 100 per cent of cases.

This compared to an average 87 per cent effective rate with a commercially available contraceptive gel containing.

While the gel is yet to be tested in humans, the researchers say it offers great potential for improving the safety and quality of sexual intercourse. 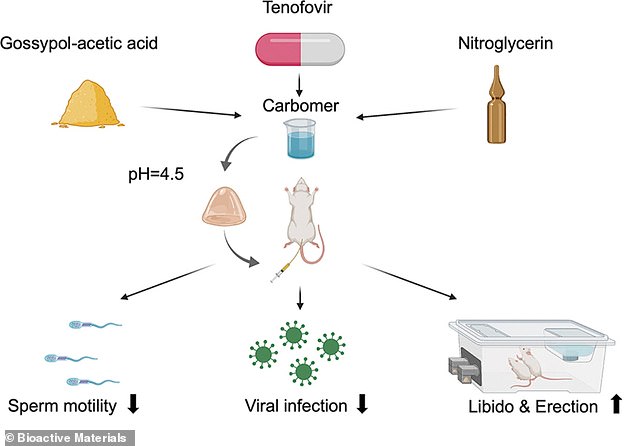 The researchers’ schematic image showing the process of gel preparation and the functional evaluation. It contains spermicidal (gossypol), anti-viral (tenofovir) and libido-enhancing (nitroglycerin) agents. The experts found sperm motility (its ability to move independently) and viral infection went down, while libido and erection was more pronounced

Nitroglycerine is an oily, colourless and unstable liquid that can explode in large quantities.

In much smaller quantities, nitroglycerine has useful medical properties because it’s able to dilate blood vessels and improve blood flow.

It’s used to treat angina symptoms, such as chest pain or pressure, that happens when there is not enough blood flowing to the heart.

Thousands of patients in Britain already take nitroglycerine daily to combat chest pain, usually in the form of a pill, skin patch, mouth spray or ointment.

But it’s also known for its potential ability to treat erectile dysfunction.

The gel is believed to work more than 12 times faster than Viagra, which three million Brits are currently taking.

‘Our hope is that this trifunctional contraceptive gel could further enhance the safety and quality of sexual intercourse.’

The new carbomer-based gel contains the contraceptive gossypol and the antiviral tenofovir, as well as the highly explosive chemical compound nitroglycerin.

Cheng and his team first tested the gel in vitro (in glass lab equipment) to determine spermicidal and antiviral efficacy.

They also tested the potential unwanted side effect of toxicity to vaginal epithelial cells.

At 10 micrograms per millilitre of gossypol concentration, the gel was effective in killing almost 100 per cent of pig sperm – used for in vitro testing – in 30 seconds.

Researchers also tested the gel in vitro against a lentivirus, a type of retrovirus that causes chronic and deadly diseases.

The team found that it did have an inhibitory effect, which indicated its potential to reduce transmission of STDs. 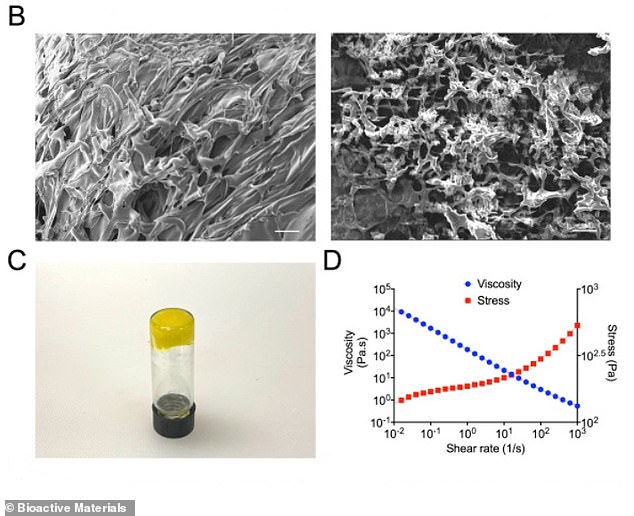 The gel was also shown not to be damaging to epithelial vaginal cells, as cell damage in treated cells was not significantly different from non-treated, or control cells.

Nontoxicity of the gel to vaginal epithelial cells was demonstrated after two hours of exposure, which the researchers say ‘was long enough, in our views, to mimic human intercourse activity’.

Next, the researchers looked at contraceptive effects in 18 female lab rats.

The rats were divided into three different groups, all receiving different gels.

Six of the rats received the new gel, while another six received a common commercially available contraceptive gel Contragel, which contains the spermicide nonoxynol9. 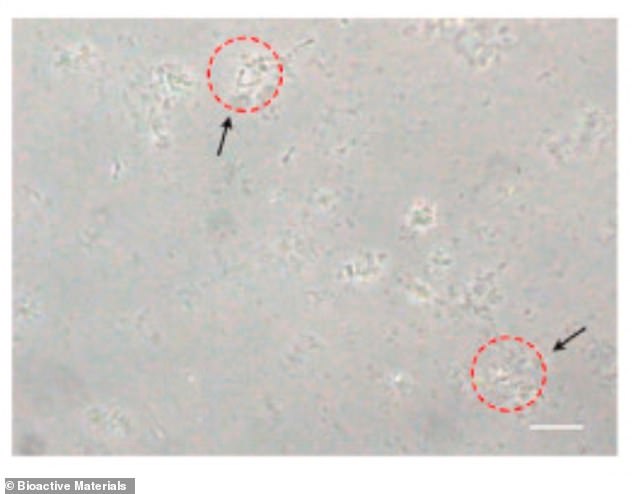 Researchers said: ‘Under the microscope, we observed that when sperm cells made contact with the gel, they lost their forward-moving motility’. Pictured, image of the morphological observation of sperm. Scale bar, 100 μm

The final six rats were placed in a control group and received blank carbomer gel as a placebo.

All female rats were then placed in the same cages as fertile male rats for mating.

The females in the trifunctional gel group had no pregnancies, as opposed to one pregnancy in the nonoxynol9 group, the team found.

In a separate animal experiment, the gel was applied to the penis of male rats to determine its effect on male libido and erectile function. 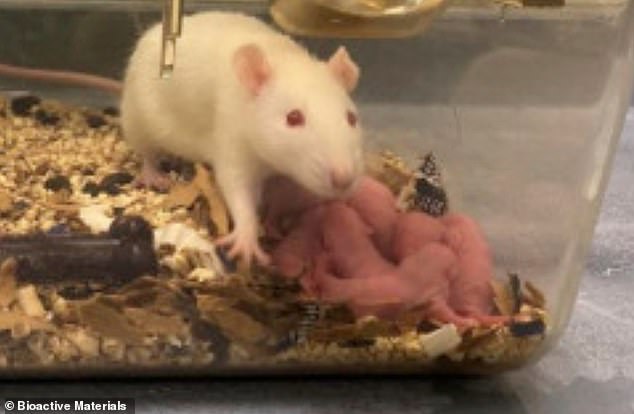 Photo of newborn rats, born to a female that had received the commercial contraceptive gel containing nonoxynol9 (Contragel)

‘Our gel, containing 1 per cent nitroglycerin, helped the male penis become fully erect,’ the researchers say in their paper, published in Bioactive Materials.

In addition, the gel shortened the incubation period for male rats (the amount of time the male took to mate once placed in a cage with a female).

It also increased the number of times male rats mated with females, compared with the rats without gel application, ‘indicating the enhancement of male libido’.

‘The trifunctional contraceptive gel we created yielded higher contraceptive success rates than those on the market,’ the team say.

‘It was formulated with the added benefits of protecting against STDs and improving male erectile function during sexual intercourse.

‘Combining three FDA [US Food and Drug Administration]-approved and marketed agents together, our trifunctional contraceptive gel has great potential for improving the safety and quality of sexual intercourse.’