Home » Science » Coughing in a corridor leaves coronavirus particles BEHIND you

Coronavirus particles expelled from a person’s uncovered mouth in a tight space like a corridor can linger at waist-height behind them for several seconds, a study warns.

The finding comes from computer simulations which show how particles behave after being coughed out by someone who is walking forward.

Swirling air and vortexes allow the particles to float in the air up to 16 feet (five metres) behind the infected person, posing significant problems for social distancing and increasing infection risk for children. 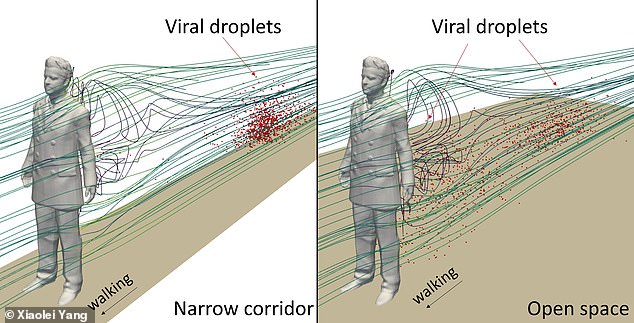 Pictured left: the detached mode created in a narrow corridor which sees a highly-concentrated mass of suspended coronavirus particles several feet behind an individual. Right: the same person walking at the same speed but in an open corridor. It shows an ‘attached’ form of circulation which sees particles stick to the person’s back and shoot out like a waist-high tail

They modelled what would happen if he coughed, without a face mask on, in both wide open spaces and also a narrow corridor.

Previous studies have focused almost exclusively on the spread of infectious particles in places with no confinements. This new study investigated how particle behaviour differs if they are physically penned.

They found that when walking in confined spaces, airborne droplets carrying the deadly virus follow a specific pattern, dubbed the ‘detached mode’.

Computer visualisation show particles are flung behind a person by the air currents made as they walk and a cloud of droplets separates from the body and forms a levitating blob of infectious aerosols several feet behind the individual.

Face shields offer no protection against coronavirus if an infected person nearby sneezes without a mask on, a study shows.

Researchers used computer models to visualise the spread of droplets around a face shield ejected by a human sneeze from 3ft (1m) away.

It reveals ‘vortex rings’ produced by the sneeze carry infectious particles to the face shield in less than a second and stick to the edges of the plastic.

Researchers say if the timing of this wave of coronavirus particles coincides with the face shield wearer breathing in, the person can become infected.

Previous research has found the shields are also useless at trapping aerosols, indicating an infected person wearing one can still spread the virus.

It is highly concentrated and is formed as a direct result of the walls buffeting and funnelling air in one direction.

However, in an open space, the researchers found virus-laden droplets from a cough follow a different course.

As air surges over a person’s shoulders and down their backs it also flows around their waist and up the back, with both streams meeting in the middle.

As a result of this, the particles produced by a cough in an open space get tangled in  a ‘re-circulation bubble’.

The bulk of the particles sit here, but some also trail out behind the person as they walk, forming a long, thin and invisible tail of coronavirus particles.

The researchers say this so-called ‘attached mod’e puts children at particularly high risk of catching the virus in this manner as it is at an adult’s waist height but this is a child’s head height.

Professor Xiaolei Yang, author of the study, added: ‘The results reveal a higher transmission risk for children in some instances, such as behind quickly moving people in a long narrow hallway.’

‘For the detached mode, the droplet concentration is much higher than for the attached mode, five seconds after a cough.

‘This poses a great challenge in determining a safe social distance in places like a very narrow corridor, where a person may inhale viral droplets even if the patient is far in front of him or her.’

The findings were published in the journal Physics of Fluids.