The global response to Covid-19 has barely made a dent in the causes of climate change, according to a major new report.

While emissions of CO2 plummeted during lockdown, concentrations of the long-lasting gas have continued to rise in the atmosphere.

The period from 2016 to 2020 will likely be the warmest five years on record, the study finds.

The United in Science report brings together experts from a large number of international organisations, including the UN and the World Meteorological Organization (WMO), to give an updated snapshot of the state of the global climate.

The study shows that global lockdowns had a significant and immediate impact on emissions of greenhouse gases, with daily levels in April 2020 falling by 17% compared with 2019. 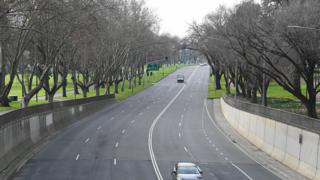 But this steep drop hasn’t been maintained. As the world returned to work, emissions rose and by June were within 5% of the previous year.

While emissions can tell us what is happening on the ground, it is the concentrations of these gases in the atmosphere that makes all the difference for global temperatures.

Because CO2 can last for centuries, adding even a reduced amount to the air increases the warming potential of all the gas that has built up over decades.

This new study shows that is exactly what’s happened at a couple of key monitoring stations around the world.

At the Mauna Loa observatory in Hawaii, the amount of CO2 measured in air samples has increased from 411 parts per million (ppm) in July 2019 to 414ppm in July this year.

Similarly, at Cape Grim monitoring station in Tasmania, concentrations were also up from 407 to 410ppm in the year to July.

A full global picture on atmospheric concentrations of warming gases won’t be available until later this year – but experts say the direction of travel is clear.

“Meanwhile, large swathes of Siberia have seen a prolonged and remarkable heatwave during the first half of 2020, which would have been very unlikely without anthropogenic climate change.

“And now 2016-2020 is set to be the warmest five-year period on record. This report shows that whilst many aspects of our lives have been disrupted in 2020, climate change has continued unabated,” he said.

The report also highlights the growing gap between the action that’s needed to keep under temperature thresholds and the reality of efforts to cut emissions.

To keep the world from going beyond 1.5C of warming (since preindustrial times) this century, greenhouse gas production needs to be slashed, urgently.

The study says that by 2030, the world would need to cut the combined emissions of the top six carbon-producing countries to have a reasonable chance of staying below the 1.5C “guard rail”.

While not impossible, the report says it would essentially require a pandemic-sized carbon slowdown every year from now until the end of the decade.

All the while, the authors say, the evidence of the impacts of climate change continues to grow.

Global sea levels are rising much faster than previously recorded. Between 2016 and 2020 the rate of increase was 4.8mm per year, an increase over the 4.1mm recorded between 2011 and 2015.

The extent of sea-ice in the Arctic has continued to decline, at a rate of 13% per decade.

Rising temperatures have also seen droughts and heatwaves and have increased the risk of wildfires.

In Siberia, a recent attribution study has shown that the heat that persisted between January and June this year was made at least 600 times more likely by human-driven climate change.

“Never before has it been so clear that we need long-term, inclusive, clean transitions to tackle the climate crisis and achieve sustainable development,” said UN Secretary General, Antonio Guterres, in a foreword to the report.

“We must turn the recovery from the pandemic into a real opportunity to build a better future,” he wrote. “We need science, solidarity and solutions.”