Billions of people could be at risk from droughts, as global warming threatens to shrink a tropical belt providing critical summer rain, warns a new study.

Researchers say droughts in Central America result from the contracting of the Intertropical Convergence Zone (ITCZ), a critical rainfall belt near the equator.

An international team of scientists looked at previous rainfall patterns within the ITCZ, including Belize in Central America, which is currently experiencing drought.

The ITCZ expands in a cooler climate, but contracts or shrinks as temperatures increase.

The team warns that this is already leading to social unrest and mass migration from affected regions, including Central America and sub-Saharan Africa.

WHAT IS THE INTERTROPICAL CONVERGENCE ZONE?

The ITCZ is the world’s most important rainfall belt affecting the livelihood of billions of people worldwide.

It is a low-pressure belt where winds from the north and southern hemispheres meet.

Water vapour condenses as air rises and cools in the ITCZ, forming clouds and falling as rain.

From satellite images, the ITCZ is seen as a band of clouds that generally circle close to the equator around the globe.

Globally, seasonal shifts in the location of the ITCZ across the equator dictate the initiation and duration of the tropical rainy season.

‘In the last five years there have been mass migrations of people in Guatemala and Honduras – partially driven by political instability, but also driven by drought-related conditions and changes in seasonality,’ said co-author of the study Keith Prufer, Professor of Anthropology at the University of New Mexico.

‘This is creating enormous problems for agricultural production and feeding a growing population.

‘There is growing evidence that these changes are a direct consequence of climate change.’

The research team reconstructed 1,600 years of rainfall, partly using a stalagmite recovered from a cave in Belize, and compared it with existing rainfall data from other locations.

Stalagmites line the floors of caves due to slowly dripping water from the ceiling, which contain rocky deposits, and can therefore act as natural records of weather history.

The team’s research suggests that future warming will increase the likelihood and frequency of future droughts.

‘What we found was that during past warm intervals, southern Belize was very dry, similar to modern central Mexico,’ said lead author Professor Yemane Asmerom, of the University of New Mexico.

‘In contrast, cooler intervals, when it should have been dry by the standard old model, were the wettest intervals over the last 2,000 years.

‘Our results are consistent with models suggesting ITCZ expansion and weakening during global periods of cold climate, and contraction and intensifying during periods of global warmth.’

Previous work suggested two models of how the ITCZ might respond to climate change.

One, based on limited data, suggested that the rain belt would shift northwards during warmer periods, and a second, based on modelling, suggested the areas would become drier as the world becomes warmer. 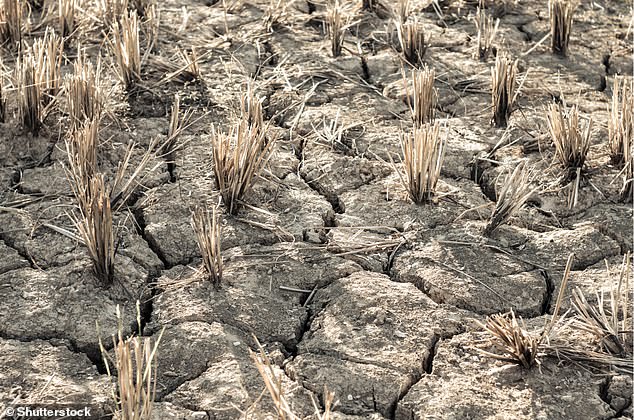 Cracked and infertile ground because of drought, partly due to a shrinking ITCZ, is casuing mass migrations in Central America

The new findings support the argument that the rain belt contracts in response to warming, confirming the second model.

This means mean drier conditions for countries found at the edge of the ITCZ all around the globe, as global temperatures rise.

‘What seems a logical next step is to test how this expansion-contraction mechanism is linked to other major climate systems, like the Asian-Australian monsoon,’ said co-author Dr Sebastian Breitenbach of Northumbria University.

‘There are lots of questions to be answered.’

Their findings have been published in the journal Science Advances.