An arrow-shooting drone has been created by researchers that can be used to monitor climate change in forests and jungles, and warn of impending fires.

Specialists from Imperial College London installed dart-mounted sensors on the bespoke drones with sensors to measure changes in the environment.

Sensors for forest monitoring are already used to track changes in temperature, humidity and light, as well as the movements of animals and insects through their habitat, but some areas are inaccessible to scientists working on foot.

The new drones can fire darts into trees several metres away even in cluttered environments – placing them on tree branches or by puncturing the tree trunk. 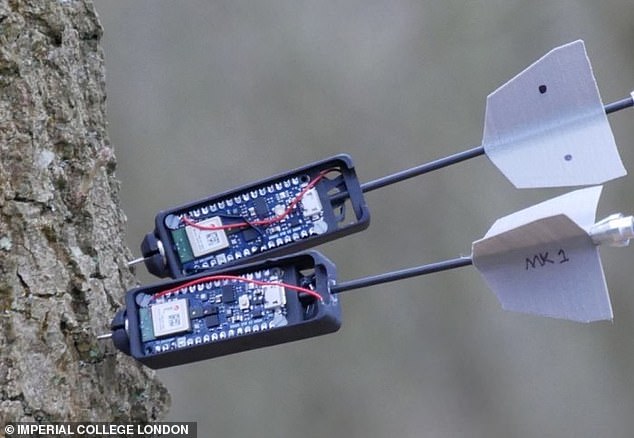 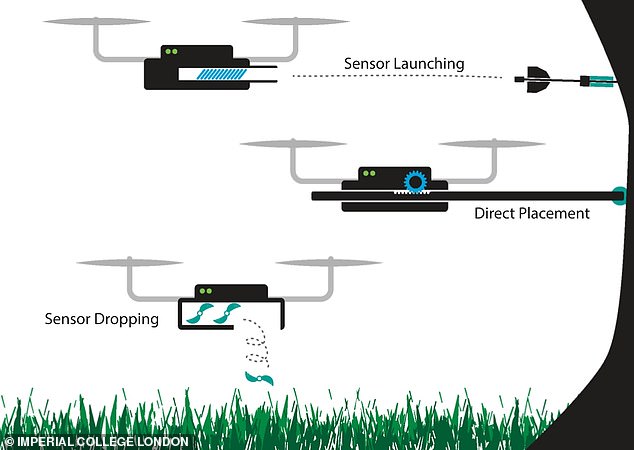 The new drones can fire the sensors on a dart, place them on a branch or even drop them in the ground to ensure as wide of a spread as possible in areas humans find it hard to access

Scientists have been placing sensors in forest and jungle environments for a range of purposes, including to monitor and even detect forest fires, provide data on climate change and to track animal movements.

However, placing these sensors can prove difficult in large, tall forests, and climbing trees to place them poses its own risks – the the scientist and the tree.

The new drones are able to get over this problem by flying into a cluttered area and shooting the sensor, attached to a dart, at the target tree.

The researchers hope the drones will be used in future to create networks of sensors to boost data on forest ecosystems, and to track hard-to-navigate biomes like the Amazon rainforest.

‘I like to think of them as artificial forest inhabitants who will soon watch over the ecosystem and provide the data we need to protect the environment.’

The drones are equipped with cameras to identify targets, and a smart material that changes shape when heated to launch the darts, which then stick to the trees.

The new flying devices can also perch on tree branches like birds to collect data themselves, acting as mobile sensors.

Researchers tested their drones at the Swiss Federal Laboratories for Materials Science and Technology (EMPA) and on trees at Imperial’s Silwood Park Campus.

The drones are currently controlled by people: using control units, the researchers watch through the camera lens to select target trees and shoot the darts. 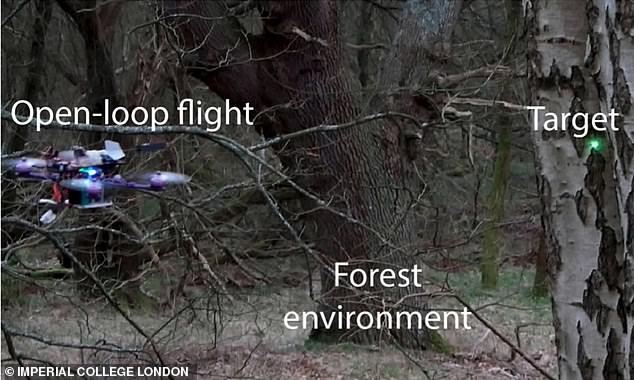 The drone is fitted with cameras that can be used to guide it towards a target, it is then able to fire the drones into a tree even in very dense forest environments with minimal movement 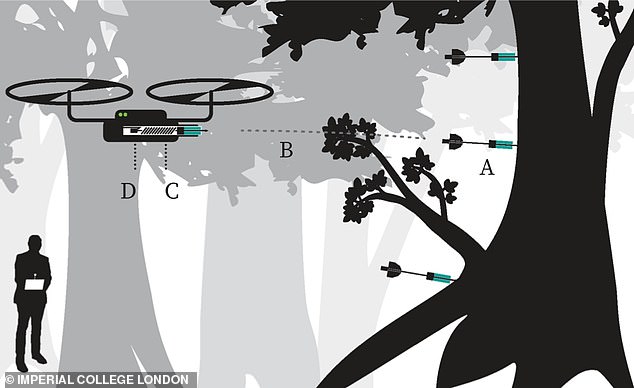 The first generation of the drones require a human pilot, but developers hope next generation versions will be autonomous, opening up very inaccessible parts of rainforests and jungles

The next step is to make the drones autonomous, so that researchers can test how they fare in denser forest environments without human guidance.

Co-author André Farhina, of the Department of Aeronautics, said there are plenty of challenges to be addressed before the drones can be used regularly in forests.

That includes ‘achieving a careful balance between human input and automated tasks so that they can be used safely while remaining adaptable to unpredictable environments,’ Farhina added.

Co-author Dr Salua Hamaza, also of the Department of Aeronautics, said they are working on new design and control strategies to allow drones to better operate.

‘Exploiting smart mechanisms and new sensing techniques we can off-load the on-board computation, and create platforms that are energy-efficient and better performing,’ Hamaza explained.

The full report on the drone and darts have been published in IEEE Xplore.