D. B. Cooper: Who is the mystery man?

Here’s a look at the story of D. B. Cooper, the man who hijacked a flight in 1971, parachuted out and was never heard from again.

In a cold case for nearly 50 years ago, a scientist has uncovered new clues in the D.B. Cooper case by looking at minuscule deposits of algae on the money, according to a new study.

The research, published in Scientific Reports, looked at "diatoms," the small deposits of algae, on the money that was found buried on the shore of the Columbia River, near Portland, Ore., in 1980, nine years after Cooper hijacked a plane with 36 passengers and later parachuted with a $200,000 ransom.

"The Cooper bill contained diatoms from summer bloom species suggesting that the money was not directly buried dry and the immersion happened months after the late November hijacking," the study's abstract states. "This finding rules out of a majority of current theories related to the crime and proposes diatoms as a feasible methodology to constrain seasonal timelines in forensics." 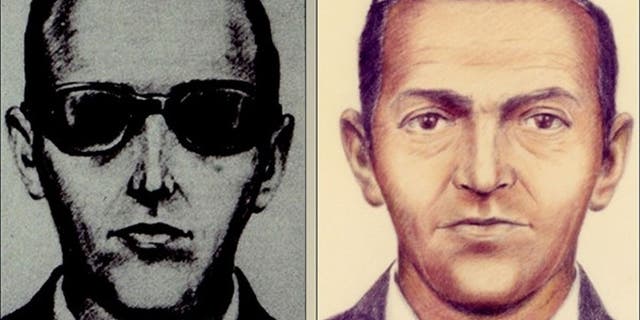 The FBI released these sketches after a man named D.B. Cooper hijacked a plane flying from Portland to Seattle on Nov. 24, 1971, and then parachuted out the back door with $200,000, never to be seen again
(FBI)

The study's lead author, Tom Kaye, told NBC King 5 he used a microscope to identify the de minimis deposits, after initially examining the bills 12 years ago at the behest of the Seattle FBI.

“So, suddenly, the light bulb came on and we wondered if we could use these different species of diatoms that we found on the Cooper bills a long time ago to determine when the money got wet and when the money landed on [the bank of the Columbia],” Kaye told the news outlet.

“The diatoms that we found [on the Cooper money] are a spring species," Kaye continued, noting it means the money was in the river months after Cooper jumped. "They bloom in the spring. They do not bloom in November when Cooper jumped."

Kaye suggested that since there was only one season of diatoms on the bills, it's possible the money came out of the water and landed on the Tena Bar, a sand bar on the Columbia, after a short period of time.

“The money was not floating in the water for a year, otherwise we would have seen diatoms from the full range of the year," Kaye continued. "We only saw them from the spring … the springtime bloom. So, this puts a very narrow range on when the money got wet and was subsequently buried on Tena bar.”

Over the years, a number of theories have popped up about the man who called himself Dan Cooper. In 2018, an anonymous U.S. Army data analyst delivered his own research to the FBI, determining a man named William J. Smith was the person who hijacked a commercial airliner in 1971.

A team of private investigators claimed in June 2018 they had decoded a confession letter from the hijacker revealing his identity, Army veteran Robert Rackstraw. Rackstraw died in July 2019, Fox News previously reported.

In 2019, an Arizona entrepreneur, Eric Ulis, said he was “98 percent” convinced that the FBI interviewed the real D.B. Cooper – Sheridan Peterson, a U.S. Marine Corps veteran who assisted refugees in Vietnam. Ulis also thought the FBI misidentified the jump zone where he may have landed after parachuting from the plane.

In 1971, on the night before Thanksgiving, a man calling himself Dan Cooper, wearing a black tie and a suit, boarded a Seattle-bound Boeing 727 in Oregon and told a flight attendant he had a bomb in a briefcase. He gave her a note demanding money. After the plane landed, he released the 36 passengers in exchange for $200,000 in ransom and parachutes. The ransom was paid in $20 bills.

The hijacker then ordered the plane to fly to Mexico, but near the Washington-Oregon border, he jumped and was never seen or heard from again.

The FBI closed the case in 2016 without identifying a suspect and after recovering only a portion of the stolen loot.