A scarily realistic deepfake video shows what it would have looked like if President Richard Nixon was forced to deliver a sombre address to the world had the Apollo 11 mission ended in disaster.

It is well-known that the American president had two speeches prepared, one in case of a safe landing and one in the event that tragedy struck.

Fortuitously, the landing on July 20 1969 by Neil Armstrong and Buzz Aldrin was a resounding success, rendering the latter redundant.

However, experts at Massachusetts Institute of Technology (MIT) have created an entirely artificial video showing what it may have looked and sounded like.

It is part of a project called ‘Moon Disaster’ and is designed to draw attention to the risk deepfakes pose and how they can manipulate people and spread fake news. 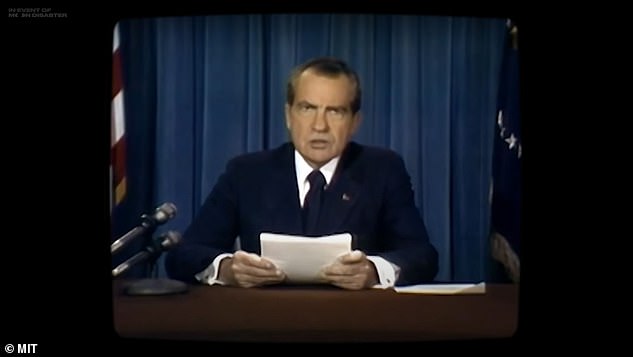 A scarily realistic deepfake video shows what it would have looked like if President Richard Nixon was forced to deliver a sombre address to the world had the Apollo 11 mission ended in disaster (pictured, the deepfake video as Nixon starts his speech)

Deepfakes are forged videos that look realistic and have already created issues in the real-world.

Last year, a viral video of Nancy Pelosi slurring her words and appearing drunk circulated around social media. However, it was doctored and not a legitimate representation of a speech she did give.

While this was not technically a deepfake, it showed the power of disingenuous videos online.

Other deepfakes have emerged since the infamous Pelosi video, including Mark Zuckerberg discussing privacy and several targeting Donald Trump.

As a results, experts have been debating how to curb the spread of the misleading videos which have the potential to ruin reputations and endanger the public.

The MIT campaign used the 51st anniversary of the moon landing to reignite the conversation.

The video comes with a clear disclaimer stating ‘what you are about to see is not real’.

It lasts more than seven minutes and is a well-edited tape which combines deep-learning, acting and genuine NASA footage.

According to the company, which recently announced the results of its contest, the best performing algorithm in its competition – which had more than 2,000 participants – was able to identify ‘challenging real world examples’ of deepfakes about 65 per cent of the time on average.

While the results of the contest are far from perfect, Facebook’s Mike Schroepfer, the company’s chief technology office, told journalists in a press call that its contest exceeded expectations.

‘Honestly the contest has been more of a success than I could have ever hoped for,’ said Schroepfer according to The Verge.

The technology will be released to the public as an open-source code for researchers .

After appearing to show the Apollo 11 mission fail catastrophically, it cuts to Richard Nixon who begins his speech.

Had this happened in real life, it would have been one of the most forlorn pieces of broadcast of all time.

The first line is: ‘Fate has ordained that the men who went to the moon to explore in peace will stay on the moon to rest in peace.’

The full speech is available in the US National Archives and was read aloud by an actor.

Physical facial movements of the president and his voice were made convincing via AI-powered ‘deep-learning’ technology.

It took a full team to produce the video and the seven-minute clip took several months to create.

The results from the team of experts at MIT are sensational and look extremely lifelike, unlike some deepfakes which have emerged recently.

The video was first put on display at a physical art installation at MIT late last year and has now been made publically available on YouTube.

At the end of the faked broadcast, the video flashes up another warning that the video is not legitimate.

Titles on the screen say: ‘This project shows the dangers of misinformation.

‘Deepfakes use artificial intelligence to simulate people doing and saying things they never did, typically without their consent.

‘The project used a range of techniques from video dialogue replacement and voice conversion systems to more traditional video editing techniques to demonstrate the range of misinformation that is possible.