A dog-sized dinosaur that lived 230 million years ago is an evolutionary ‘missing link’ to the horned and armoured giants, according to new research.

The diminutive dinosaur is named Sacisaurus agudoensis and is believed to be an  ancestor of Triceratops and Ankylosaurus.

Analysis from Brazilian researchers found the Labrador-sized creature fits into the genetic history of dinosaurs at the very start of a branch known as ornithischians.

It was about five foot in length, four foot tall and weighed roughly five stone. The creature walked on four legs, had a long neck and a slender, athletic body.

The diminutive dinosaur Sacisaurus agudoensis is believed to be an ancestor of Triceratops and Ankylosaurus (pictured, illustration of the dinosaur)

They lived just after the first dinosaurs split into two groups – ornithischians and saurischians – during the Triassic Period. The former includes triceratops while the latter includes the T-rex.

The distinction between the two groups is a subtle but distinct one and is based on their hips. Saurischians’ were like a lizard’s whereas the ornithischians’ resembled modern birds.

Counterintuitively, it is the saurischians lineage which eventually evolved into modern birds.

Sacisaurus helps to fill a gaping hole in the known evolution of ornithischians but little had been known about this period as volcanic eruptions 200 million years ago triggered a mass extinction and wiped out many species.

Academics had therefore been working with a lack of evidence but had long assumed the presence of ‘ghost lineages’.

Now, researchers think the mass extinction was survived by a handful of silesaurids, including the Sacisaurus, provided them with an opportunity to rapidly diversify and conquer the world.

An exuberant dinosaur with a parrot-like beak, bony frills, a huge horn on its nose and a ‘star-like’ skull has been named in honour of British rock musician David Bowie.

US palaeontologists have given the dinosaur genus the name Stellasaurus, meaning ‘star lizard’, based on a fossilised skull found in Montana.

The name is a reference to the overall ‘star-like appearance’ of the skull, and a homage to Bowie’s hit 1972 single ‘Starman’.

Dr Rodrigo Muller, of the Federal University of Santa Maria, who was involved in the research, told South West News Service: ‘[The discovery] shakes the family tree by its roots.’

Dr Muller and undergraduate Mauricio Silva Garcia pieced together the anatomy of the species from fossilised bones across the world.

They were unearthed at prehistoric animal graveyards in South America, Europe, Africa and the US.

Sacisaurus had small razor sharp teeth and a beak-like jaw and likely had an omnivorous diet including insects, lizards and turtles.

‘So it was a primary or secondary consumer – not an apex predator from the food chain.

‘It would have been attacked and eaten by carnivorous theropod dinosaurs and large crocodile-like reptiles.

‘One of the most conspicuous traits is the presence of a beak-like projection from the lower jaw.

‘Another peculiar feature is the long and slender forelimbs, distinct from the other early dinosaurs, which are bipedal and bear short forelimbs.

‘Sacisaurus agudoensis was among the first dinosaurs that walked the planet.’ 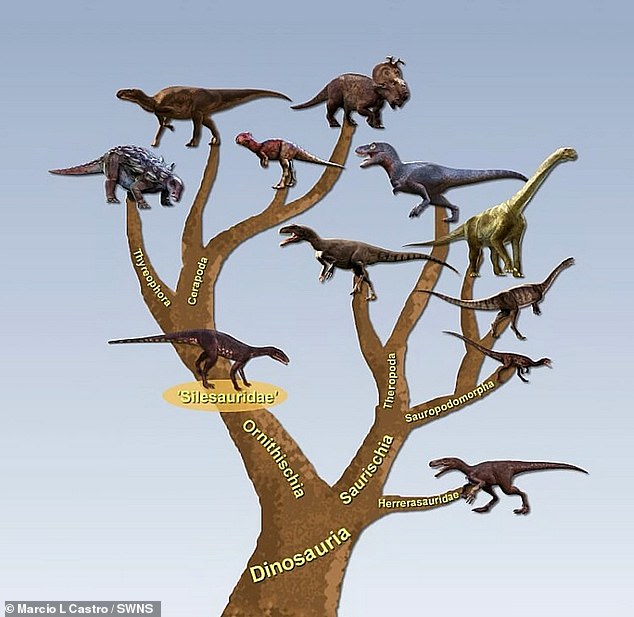 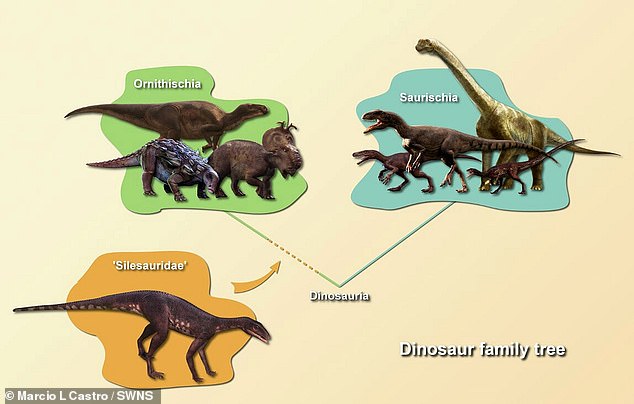 Now, researchers think the mass extinction was survived by a handful of silesaurids, including the Sacisaurus, provided them with an opportunity to rapidly diversify and conquer the world

At the time the continents were still stitched together to form one enormous landmass called Pangaea.

Sacisaurus, described in Biology Letters, pushes the ornithischian lineage all the way back into the Triassic period.

Dr Muller said: ‘The ornithischians include the famous horned and armoured dinosaurs from movies.

‘Their origin and evolution is one of the hardest challenges for palaeontologists. They are well known from Jurassic and Cretaceous deposits.

‘But there are none in the fossil record from the Triassic. Sacisaurus solves this vexing problem. We show the silesaurids are the direct ornithischian ancestors.’