Home » Science » Doomsday preppers are thinning out across the US, and it may be because President Trump quiets their fears

In 2014, British criminologist and researcher Michael Mills traveled to the US to investigate why so many Americans were preparing for the end of the world as we know it.

The “preppers” had a variety of reasons for their doomsday stashes. Some worried about food and water shortages after natural disasters, others wanted to be ready for war,deadly pandemic diseases, or amajor power system failure at a moment’s notice.

But many were motivated to prep, at least in part, based on who was living in the White House at the time. Mills asked one prepper, named Mary, about her motivations:

“Let me ask how politics impacts on your prepping,” Mills said at the time. “Could you -”

Mary’s opinion was not an entirely uncommon view among American preppers at the time. Thirty-five of the 39 that Mills spoke to on that 2014 trip self-identified as right-leaning politically, attaching labels to themselves including “conservative,” “right-wing Republican,” “libertarian,” and “conserv-atarian.”

But since President Trump took office in 2016, prepping has taken a dive nationwide. There are fewer prepper conventions held across the US, and several prepper business owners who spoke with Business Insider (as well as Mills), say the prepping community is not as active as it was three years ago. It’s an indication of how Trump relieves many of the worst fears of his voters, including conservative preppers.

“It definitely seems to be cycling with the White House,”prepper and inventor Mikhail Merkurieff, who builds and sells prepping and camping tools including stoves, cooking utensils, and portable shelters, told Business Insider. 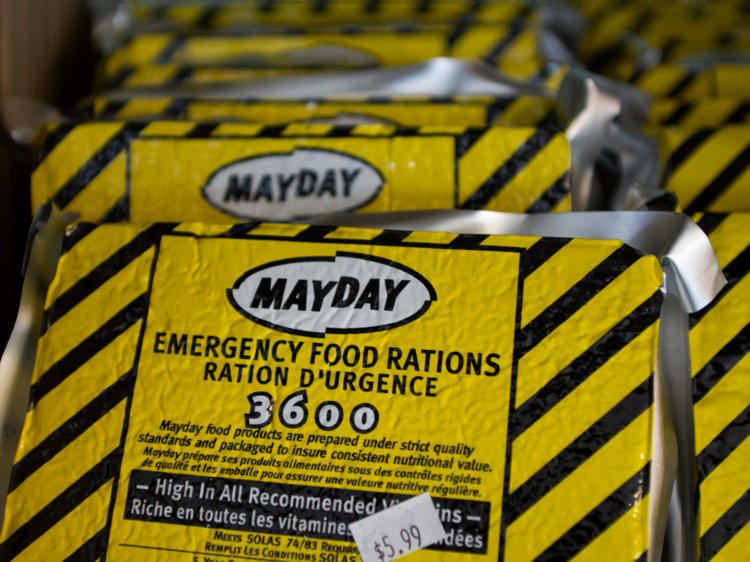 Freeze dried meals and emergency food rations, which are a staple of preppers, filled the racks at Grandma’s Country Foods in Sandy, Utah on December 10, 2012.Jim Urquhart/Reuters

There aren’t many liberal preppers

After Trump was elected in 2016, Mills returned to the US again to chat with preppers, and found they were feeling more “relaxed,” now that Trump is president.

While there have been somereports that a band of liberal, anti-Trump preppers is growing since the 2016 election, Mills says he hasn’t see much evidence of any huge increase in prepper stockpiles, a sentiment that Merkurieff and other prepper businesspeople echoed.

“My sense is that most of it has really cooled off,” Mills told Business Insider. “No doubt there was an uptick in left wing and liberal preppers following the election, but I just don’t think it’s comparable in its scale to what happened post-2008 when Obama came in.” 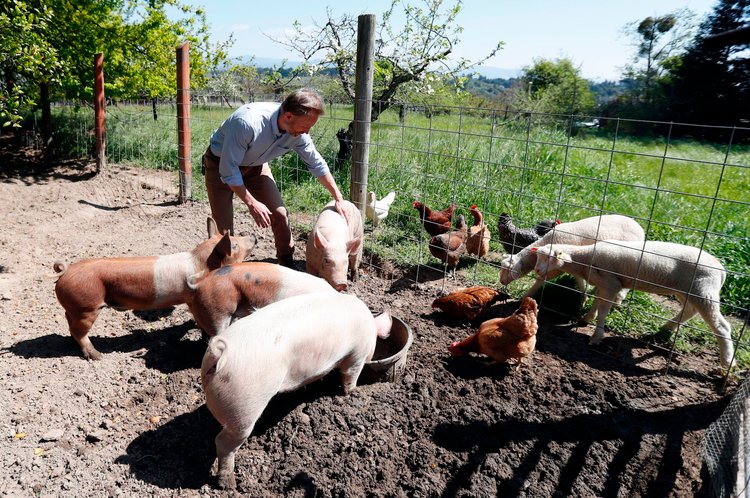 Adam Taggart raises chickens, pigs, and sheep on his property in Sebastopol, California. Taggart wants to be prepared for a major disaster, whether environmental, financial, nuclear, or political.Monica Davey/AFP/Getty Images

“Trump’s in office, we don’t have to worry about anything”

Mills is one of the only academics studying the prepping phenomenon. He wrote about the rise of preppers under Obama inthe Journal of Risk Research last year, and just followed up with hisJournal of American Studies paper “Obamageddon: Fear, the Far Right, and the Rise of ‘Doomsday’ Prepping in Obama’s America” in June. He says the current prepper cool-off in the US is being felt by people who run prepping Facebook groups, and prepper-focused businesses, too.

Rick Austin, who organizes a popular “Prepper Camp” in the hills of North Carolina every year, which is attended by roughly 1,400 worst-case-scenario preparers hoping to beef up their skills, also noted a downturn.

“Businesses are down because people have kind of gone, ‘Oh, you know, Trump’s in office, we don’t have to worry about anything,'” he said while milking his goats from an “undisclosed location” in the Appalachian Mountains.

Data backs this up.

Between March 2014 and May 2015, Mills tallied 46 prepping expos across the US, where preppers would link up to buy gear and glean new survival skills. This year, prepper websiteThe Simple Prepper names just over a dozen prepping shows across the US.

“They tend to be prepping and gun shows,” Mills said. “The prepping is kind of folded into another interest.” 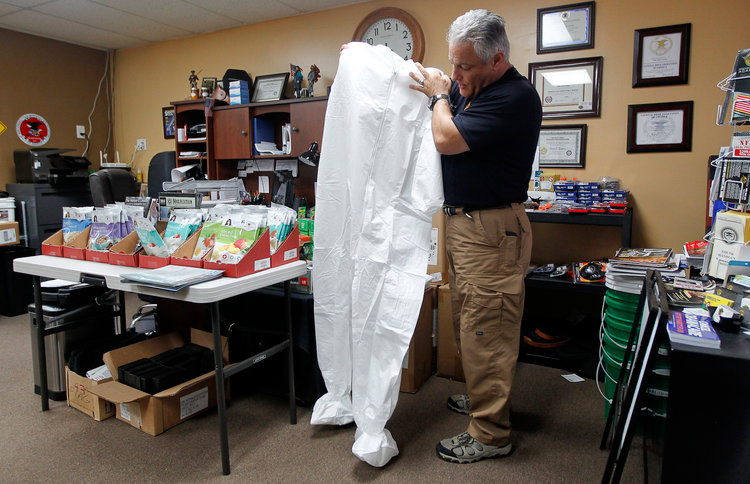 Prepping is an American tradition

Mills says prepping is an American-born tradition. The preparedness phenomenon aligns with the US history of prizing ideals of individualism and self-reliance. Preppers often talk about “homesteading” and learning “forgotten ways” of living off the land.

“You go down the tributary of gardening, of livestock, of woodworking, of wild and herbal medicinals, and you reconnect with everything that we’ve forgotten just in 60, 70 years,” prepper and “I am Liberty”podcast host James Walton told Business Insider. “This is my life. The gardens, the chickens, the self-reliant lifestyle, the hiking, the fishing, the hunting. You know, I even blacksmith now just because it’s fun.” 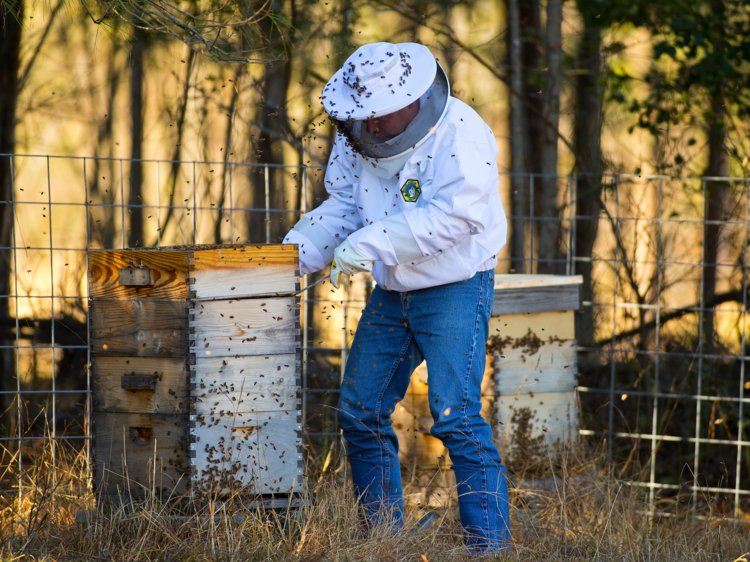 Jeff Nice tends to his honey bees on his farm in Kinston, North Carolina, December 14, 2012. Nice lives on a 13 acre farm, raising beef, chicken, turkey, and canning vegetables from the garden.Chris Keane/Reuters

Fear is the darker, and perhaps more subconscious, reason that some people tend to prep more than others.

When Mills visited preppers in 2014, he said he’d often hear them echo lines from that TV channel uttered just hours before, about how Obama was golfing too much, or the importance of securing US borders.

“With Obama in office, certain people were very worried, and they had a glut of purchasing prepper gear,” Merkurieff said. “Now there’s a false sense of ‘Okay, the danger’s over.'”

“Anytime somebody feels as though something could be taken away from them, either freedom or property, they’re going to hoard it,” Merkurieff said. “You’ve always got that group that’s gonna panic.” 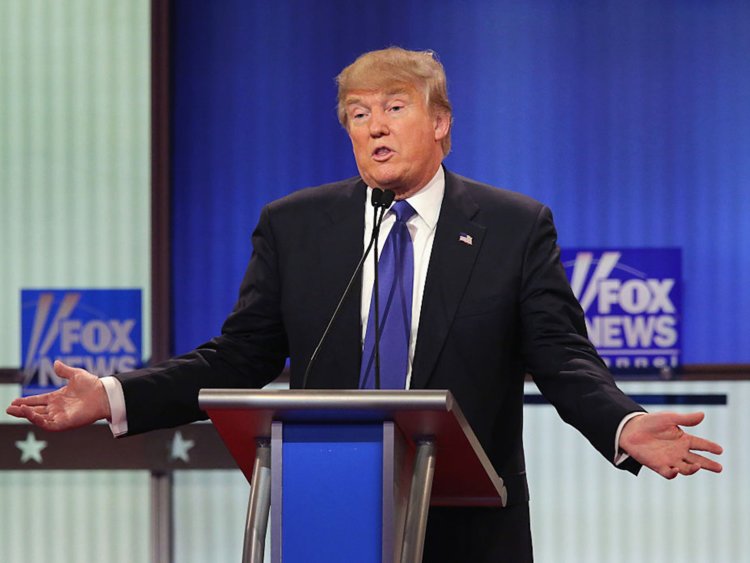 Social scientists have studied for years this relationship between fear and political preferences. There’s a clear pattern ofpeople becoming more conservative-minded whenever they feel threatened and afraid (it happened after 9/11, and has been documented outside the US, too).

Mills has noticed that the “peculiarly pronounced politics of fear” in American right-wing culture has intensified over the past 20 to 25 years, and it’s something Trump uses to his own political advantage.

When Obama was president, preppers would often tell Mills he was “a weak leader or a narcissist,” but he doesn’t see any of those same fearful criticisms of Trump when he talks to preppers now.

“For a lot of people, the idea that Trump is fixing the economy, regardless of whether that’s actually true or whether he’s done much productive, and the idea that he’s tough on ISIS as well as on foreign policy, sees him addressing the concerns that a lot of preppers would have had under Obama and the ways that they would like them to be addressed,” Mills said. 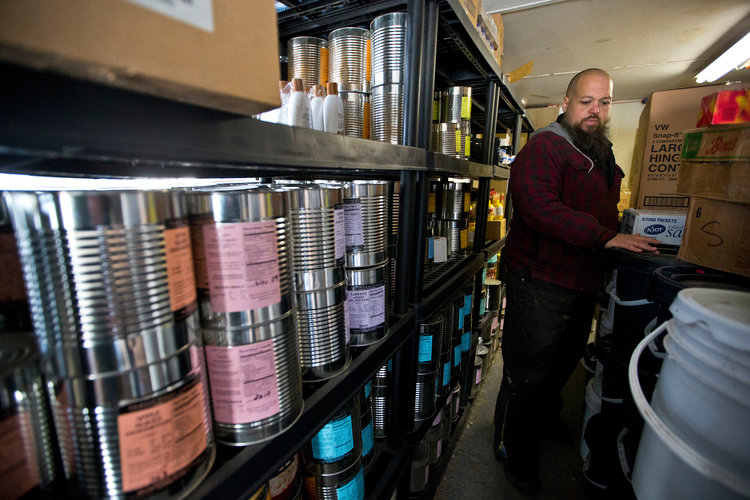 Mike Holland reviews his stock of dry food storage in a trailer at the Holland family property in Warrenton,North Carolina,December 13, 2012.Chris Keane/Reuters

There is a spectrum to prepping that can range from stocking a little extra toilet paper and bottled water toelaborate multi-million dollar bunkers. One couple in their 70s who Mills met in Texas had several well-stocked gun safes in their garage with loads of hefty artillery stocked inside.

“One of them contained this rifle that apparently could take out a car, you know, destroy its engine with one shot,” Mills said. “The guy was lifting it out of the safe, but it was so, so heavy that he was visibly trembling.”

That man and his wife are the only preppers that Mills has ever met who were building a bunker (theirs was being fashioned out of old buried shipping containers, though they never finished it).

“The people that I’ve interviewed include a fire chief, paramedics, firemen …. former doctors, people in retirement, business owners, people who worked for government,” Mills said. “Everyday Americans — but they think about disaster in certain ways that a lot of people wouldn’t.”

There are also lots of preppers who are not motivated by politics at all. New York Firefighter Jason Charles,who has a closet filled with $10,000 worth of doomsday supplies, told Business Insider in 2017, “We’re ready for anything and all of it.” 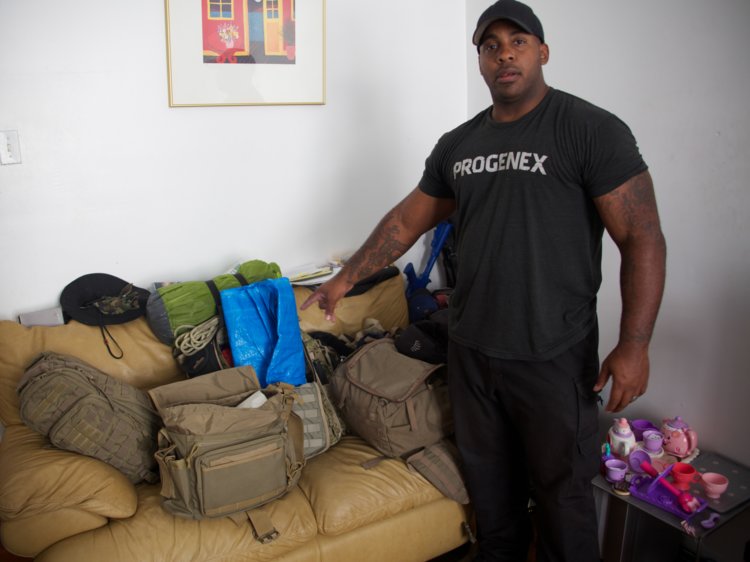 “We kind of joke, like, man, we have to get a Democrat back in the White House and sales will go back up,” Merkurieff said.