Earth’s first continents emerged from the oceans around 3.3–3.2 billion years ago — at least 700 million years earlier than previously thought, a study has concluded.

Researchers from Monash University studied the sedimentary and igneous rocks of an ancient continental fragment in India called the Singhbhum Craton.

They found evidence of eroding continental landmasses in the form of ancient beach sediment dating back to around 3 billion years ago.

Moreover, biochemical analysis of the granites formed at the base of the craton indicates that the continental crust began thickening out 3.5 billion years ago.

By around 3.2 billion years ago, the team said, the buoyant crust would have become thick enough to emerge from the oceans, forming one of the earliest landmasses.

The subduction–collision processes of today’s continents were not involved in the emergence of the first continents, the team explained.

In fact, plate tectonics likely did not kick into action until around 2.94–2.78 billion years ago, they believe. 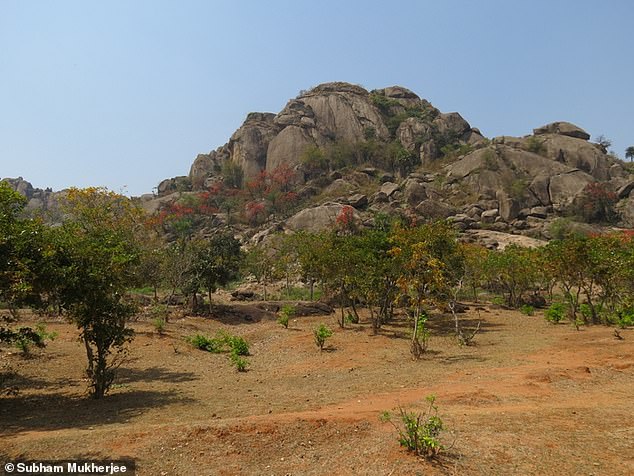 Earth’s first continents formed around 3.3–3.2 billion years ago — at least 700 million years earlier than previously thought, a study has concluded. Pictured: outcrops of 3 billion-year-old granites in India’s the Singhbhum Craton, which is an ancient continental fragment

THE RISE OF EARTH’S CONTINENTS

The emergence of Earth’s earliest continental landmasses around 3.3–3.2 billion years ago would have had a profound impact on our planet’s atmosphere, oceans and climate.

The erosion of continental material into the oceans would have provided nutrients to coastal environments, leading to a boom in photosynthetic life that helped to create the oxygen rich atmosphere we breathe today.

Furthermore, Dr Chowdhury and colleagues explained, erosion of the early continents would have helped to sequester the greenhouse gas carbon dioxide from the atmosphere, leading to global cooling and the onset of the planet’s first glacial conditions.

The investigation was undertaken by petrologist Priyadarshi Chowdhury of Australia’s Monash University and his colleagues.

‘The emergence of the continents was a pivotal moment in the history of life on Earth, not least because they are the humble abode of most humans,’ the team wrote in The Conversation.

‘But it’s still not clear exactly when these continental landmasses first appeared on Earth, and what tectonic processes built them.’

In their study, Dr Chowdhury and colleagues analysed sandstone deposits preserved within the Singhbhum Craton that were once ancient rivers, estuaries and beaches.

Beaches are formed from the accumulation of sand and gravel along coastlines, with this material eroded off of the land by wind and rain before being transported downstream to the sea by rivers.

Given this, beaches sediments, and those from rivers and estuaries, can provide evidence about the continental landmasses from which they formed.

The researchers dated the age of each of the sandstones by studying microscopic grains of a mineral called zircon, which naturally contains tiny amounts of uranium that slowly decay into lead over geological periods of time.

By measuring the ratio of lead to uranium, it is possible to determine how long ago the zircon crystals formed.

The team’s uranium–lead dating indicated that the ancient sandstones in the Singhbhum Craton were deposited around 3 billion years ago, making them some of the oldest-known beach deposits in the world.

By extension, the presence of beaches at this time shows that a continental landmass must have emerged in what we now know as India by at least 3 billion years ago, in order to provide the material from which the beach formed.

‘Interestingly, sedimentary rocks of roughly this age are also present in the oldest cratons of Australia (the Pilbara and Yilgarn cratons) and South Africa (the Kaapvaal Craton),’ the researchers wrote.

This, they continued, suggests that ‘multiple continental landmasses may have emerged around the globe at this time.’ 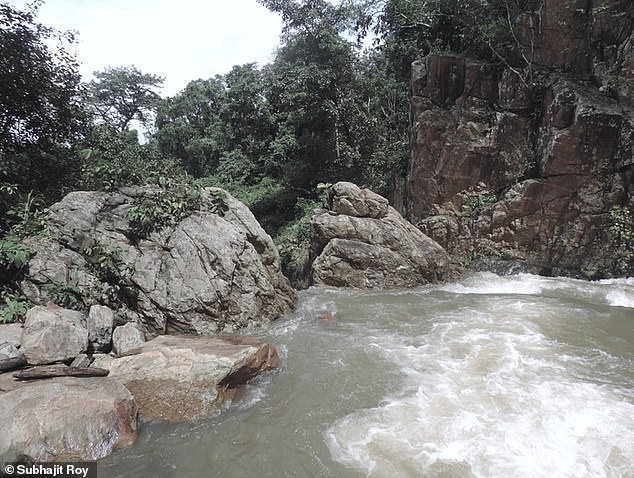 In the second part of their study, the team turned their attention to working out how the first continents rose above the oceans — a feat which would have required them to increase in thickness beyond a critical threshold.

‘A unique feature of continents is their thick, buoyant crust, which allows them to float on top of Earth’s mantle, just like a cork in water,’ the team explained.

‘Like icebergs, the top of continents with thick crust (typically more than 45 kilometres [30 miles] thick) sticks out above the water, whereas continental blocks with crusts thinner than about 40 kilometres [25 miles] remain submerged.’

Most ancient continents — the Singhbhum Craton included — are built up of granite, formed from the melting of pre-existing rocks at the base of the crust.

Analysis of granitoids (TTG in the above) from the craton revealed a transition from predominantly sodium to a more potassium-based geochemistry in the period from around 3.53 to 3.1 billion years ago — indicating a progressive maturation of the crust. Furthermore, the rocks become increasingly depleted in heavy rare earth elements (HREE) and yttrium, which the team explain indicates that the granites were forming at greater pressures — more than tripling in the period from 3.5–3.25 billion years ago — and, by extension, greater depths

Analysis of the granitoids from the craton revealed a transition from predominantly sodium to a more potassium-based geochemistry in the period from around 3.53 to 3.1 billion years ago, indicating a progressive maturation of the crust.

Furthermore, the rocks become increasingly depleted in heavy rare earth elements and yttrium, which the team explain indicates that the granites were forming at greater pressures — more than tripling in the period from 3.5–3.25 billion years ago.

With these rocks forming at the bottom of the continental crust, this indicates an increase in the thickness of the Singhbhum Craton from around 20 to 28 miles over the same time-span.

‘We calculate that by around 3 billion years ago, the continental crust of the Singhbhum Craton had grown to be about 50 kilometres [31 miles] thick, making it buoyant enough to begin rising above sea level,’ the researchers explained.

The full findings of the study were published in the journal Proceedings of the National Academy of Sciences. 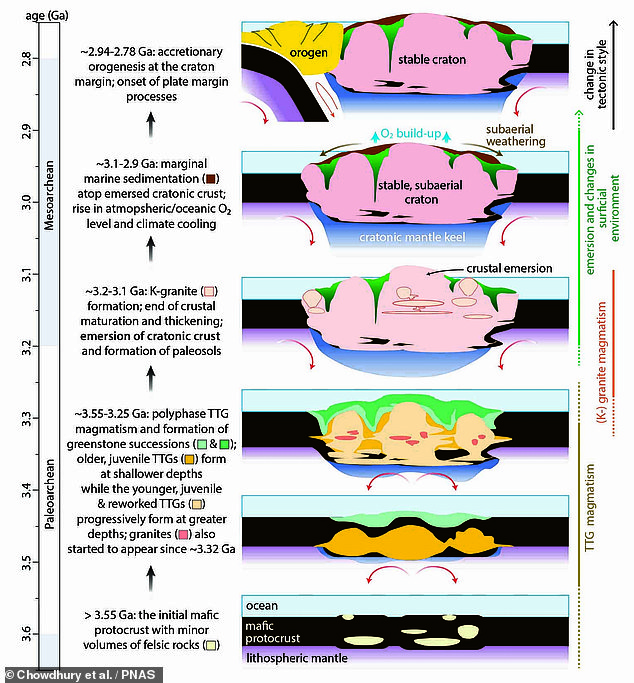 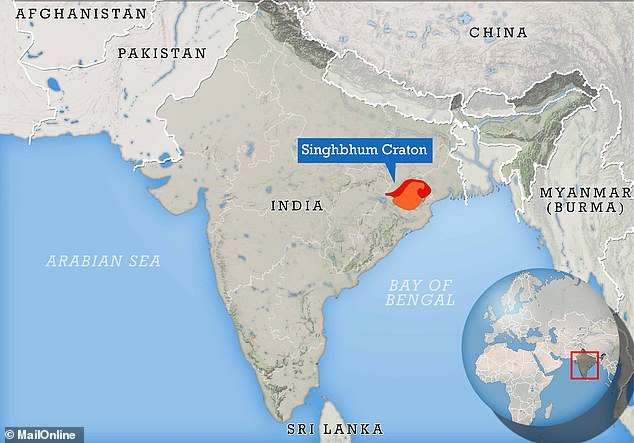 WHAT EARTH WAS LIKE 3 BILLION YEARS AGO, IN THE ARCHEAN

The Archean is the name given to the second geologic eon of Earth’s history, which ran from 4–2.5 billion years ago.

Entering this time period, the planet had cooled enough to allow the first continents to form and primitive life to emerge.

The latter took the form of mats of microbes — which leave characterises layered remains called ‘stromatolites’ in the fossil record.

The Archean atmosphere is believed to have lacked free oxygen, but — due to a relative abundance of greenhouse gases — maintained a surface temperature similar to that of today, despite the Sun only being at 70–75 per cent of its present luminosity.

Unlike later geological eons and period, the Archean is defined not by a definite boundary layer in the Earth’s stratigraphy, but by means of absolute dating.