The Asian nation has one of the oldest populations in the world, with 28 per cent of natives over the age of 65.

As the government considers raising retirement age to 70 in order to cope, more would-be pensioners are strapping on £1,000 exoskeletons to boost strength and stamina to extend their working life.

Like most other industrial-focused exosuits it is worn like a backpack but it weighs less than ten pounds and can help lift up to 55lbs (25kg). 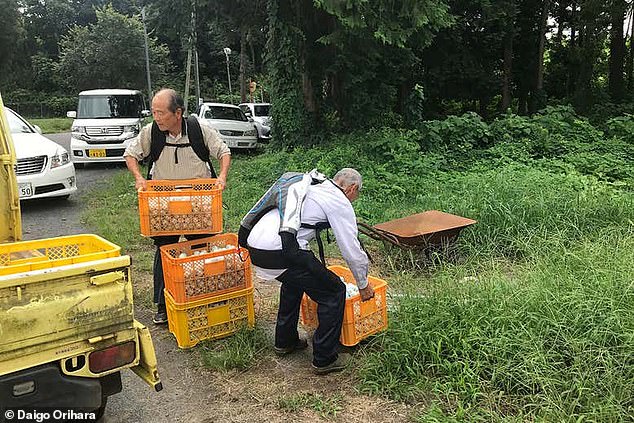 One smell company has bought the £1,000 Innophys suit to help the 70-year-old patriarch on which the company depends, continue his work selling pickled radishes 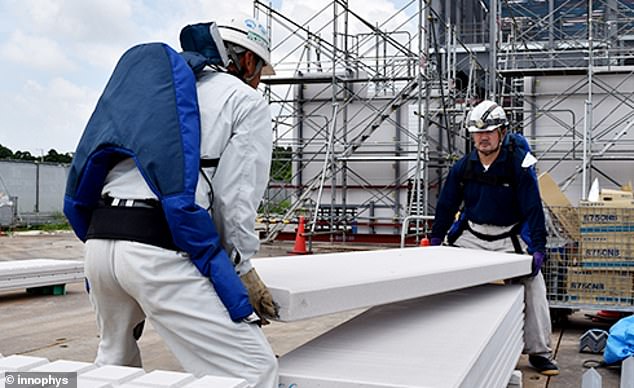 Exoskeletons are being trialled in warehouses and other labour-intensive jobs to prevent injuries to staff, but have also shown promise in aiding the disabled and elderly

Exoskeletons are being trialled in warehouses and other labour-intensive jobs to prevent injuries to staff, but have also shown promise in aiding the disabled and elderly.

One small company has bought a suit to help its 70-year-old patriarch carry on working in his job selling pickled radishes.

‘We have no option – elderly people need to stay at the workplace,’ Daigo Orihara at the firm Innophys told New Scientist.

Exoskeletons are wearable devices that work in tandem with the user.

Exoskeletons are placed on the user’s body and act as amplifiers that augment, reinforce or restore human performance.

The opposite would be a mechanical prosthetic, such as a robotic arm or leg that replaces the original body part.

Exoskeletons can be made out of rigid materials such as metal or carbon fibre, or they can be made entirely out of soft and elastic parts.

Exoskeletons can be powered and equipped with sensors and actuators, or they can be entirely passive.

Exoskeletons can be mobile or fixed/suspended and can cover the entire body, just the upper or lower extremities, or even a specific body segment such as the ankle or the hip.

The Every Muscle Suit is one such piece of equipment which is targeting the older people stuck in work purgatory.

A handpump, when squeezed 30 times, inflates the artificial muscles which increase a person’s capacity.

The Innophys model allows people to lift up to 55 pounds (25 kg) and doesn’t need to be re-inflated for up to 48 hours.

More than 4,000 have been sold, Orihara claims, to firms that encompass a range of different roles.

Among them, are old people looking to extend their working lifespan.

‘One client is a family-owned company which makes and sells pickled radish and uses heavy weights in the process of production,’ he says.

‘The father is in his 70s and was supposed to retire but is still working with our muscle suit,’ he says.