Elon Musk has provided several new, rare, and telling glimpses into how his rocket company, SpaceX, is building a spacecraft to reach Mars.

On September 17, Musk announced that SpaceX would fly Japanese billionaire Yusaku Maezawa around the moon on the company’s Big Falcon Rocket or BFR. During that event, Musk showed off new renderings of the launch system, along with a few photos of the work going on inside SpaceX’s spaceship-building tent at the Port of Los Angeles.

These were the first new details about SpaceX’s rocket construction we’d gotten since April, when Musk posted a photo that revealed SpaceX was building the spacecraft using a 40-foot-long, 30-foot-wide cylindrical tool. 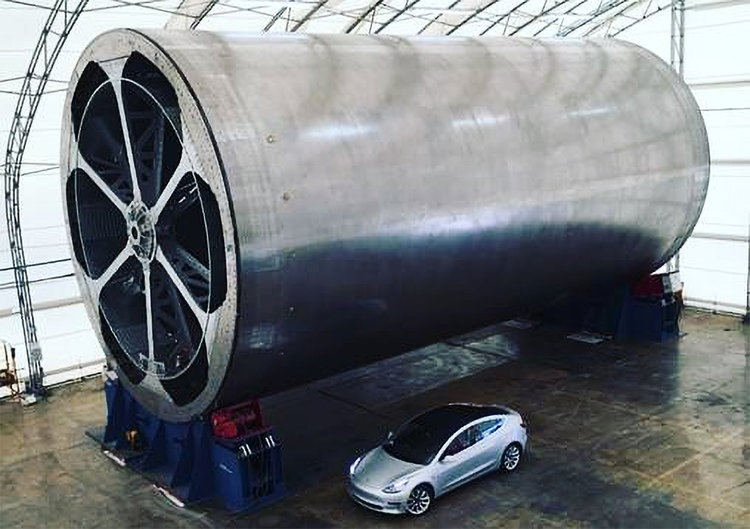 A tool SpaceX is using to build its Big Falcon Rocket spaceships.Elon Musk/SpaceX; InstagramAerospace industry experts say the newly released pictures reveal new information about how SpaceX is constructing the BFR and how quickly the project is moving.

“It’s unusual for companies and even government agencies that develop rockets to reveal much about the hardware they’re developing. But what Musk wants to do is to bring along the public with him,” Marco Cáceres, a senior space analyst at the Teal Group, told Business Insider. “He lives and breathes this company. So when he has hardware that he’s excited about, he just wants to show it and be as transparent as possible.”

The BFR is designed to be a 39-story launch system made of two parts: a 180-foot-tall spaceship, from tip to tail, and a 230-foot-tall rocket booster (which the ship rides into orbit). Musk has said the spaceship is the “hardest part” of the system to build, so SpaceX is prototyping it first.

Musk’s vision is to launch the spaceship into orbit and refuel it while it circles Earth. Then the ship can fire up its engines, fly through space, land on Mars, and later rocket off of that planet and return to Earth. Because it’s designed to be 100% reusable, the system will supposedly be able to do all of this many times.

Musk said in 2016 that SpaceX is building the system “primarily of an advanced carbon fiber,” which is about as strong as steel at one-fifth of the weight.

One of the new images Musk shared on September 17 shows a ribbed, spoked tube with a worker inside. This is the inside of the cylindrical tool that Musk first revealed in March; it’s called a mandrel. Robots wrap layer upon layer of carbon-fiber tape around the mandrel to form a 30-foot-wide “barrel section” of the spaceship. 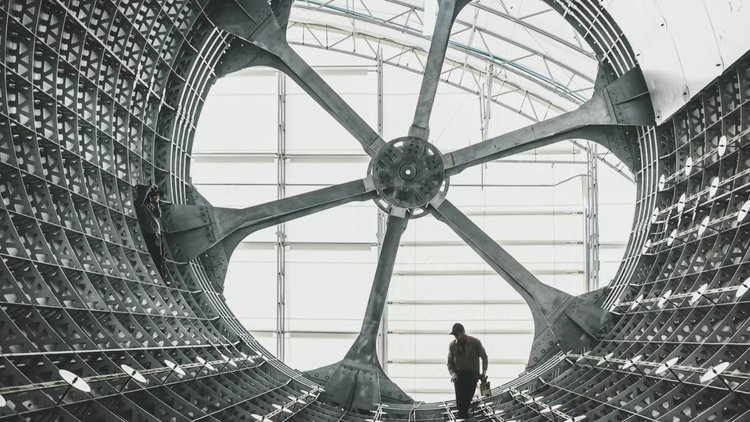 Inside a mandrel that SpaceX uses to build carbon-fiber-composite sections of the Big Falcon Rocket.SpaceX

The carbon fibers are soaked in a glue-like epoxy, then heated so that the composite cures and hardens.

The photo below, which Musk also revealed on September 17, shows a barrel section that’s been cured and freed of the mandrel. The rounded dome on the left appears to be part of a propellant tank also made of carbon-fiber composites. 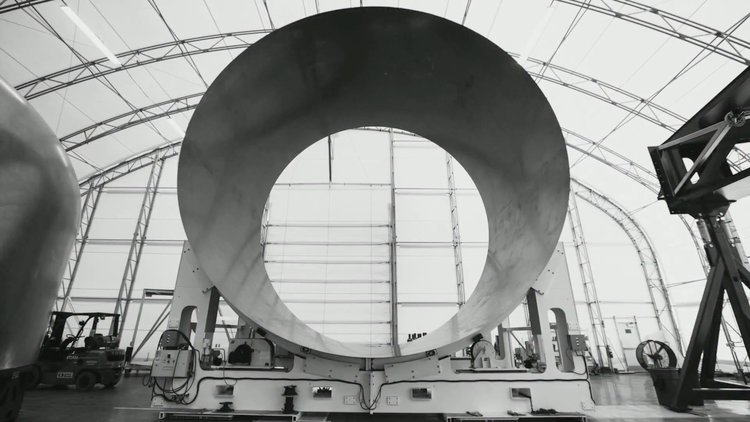 Many carbon-fiber tapes are woven fabric. But Steve Nutt, a professor of chemical, aerospace, and mechanical engineering at the University of Southern California, told Business Insider that he thinks SpaceX engineers are wrapping the mandrel in an unwoven version of the tape.

Nutt said such unwoven tapes provide the “highest stiffness and strength” because they don’t easily kink or wrinkle (which can weaken a structure). They also maximize the amount of super-strong carbon fiber relative to epoxy, he said.

Nutt said it’s “quite clever what they are doing.”

Carbon fiber must be squeezed while it’s heated and cured, so Nutt thinks SpaceX may be using very large plastic bags and sucking out the air to compress the layers of tape. But he’s unsure how SpaceX is actually heating the parts.

“Structures are getting too big to oven-cure, so they might be using so-called ‘heat blankets,'” he said.

‘He’s shoving this in NASA’s face’

“This is probably the biggest challenge that I’ve seen since the Saturn V days, in terms of engineering,” Cáceres said, referring to NASA’s Apollo-era moon rocket. “Nothing I’ve seen is remotely this size.” 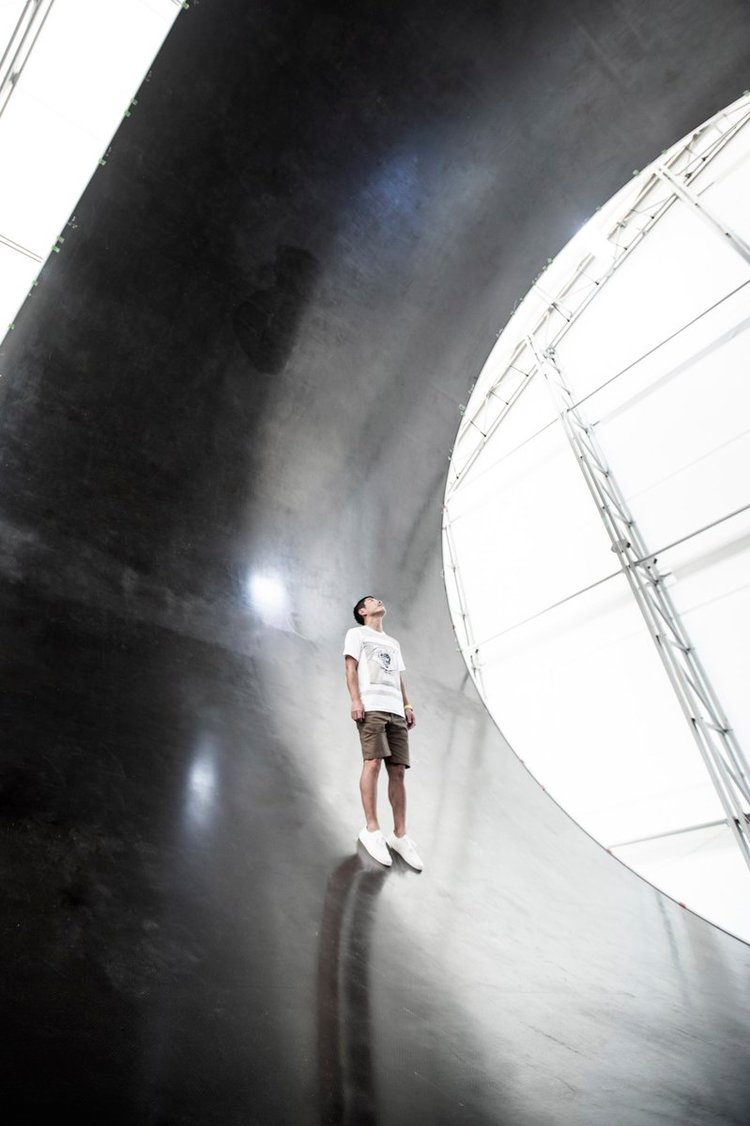 Cáceres previously estimated that the BFR development program could cost about $5 billion, and Musk gave the same estimate when he announced Maezawa’s role in SpaceX’s moon tourism mission.

“He’s looking for investors because he’s not Jeff Bezos, who could probably do this on his own,” Cáceres said. “Musk is not as wealthy. He can look for investors by building stuff and showing it off. If you see how much hardware he has and how big it is, people will say, ‘Yeah, this is a serious program.'”

If the 2023 moon mission aboard BFR — a project Maezawa calls #dearMoon—is successful, that would send a big message to NASA about SpaceX’s capabilities.

SpaceX has gotten billions of dollars in NASA funding through the agency’s Commercial Crew Program, which aims to partner with private companies to build a system for launching astronauts to the International Space Station. So it would make sense for Musk to try to get NASA’s attention (and money) again for the development of BFR.

Right now, NASA is building a giant, one-use launcher called Space Launch System, which may cost more than $20 billion to develop and priced at about $1 billion per launch. Meanwhile, SpaceX’s BFR may cost the company tens of millions to refuel and launch once the spacecraft is operational.

“In a way, he’s shoving it in NASA’s face and saying, ‘You guys are crazy to build this rocket,'” Cáceres said of Musk and SLS, respectively. “Elon Musk is a very charismatic figure and a showman. He understands that, for many years, NASA has been trying to create public excitement about space exploration, and they always try to recreate the excitement around Apollo. But they’re not successful.”

Musk, on the other hand, may be beating NASA at that goal.

“The thing Musk is building looks like it’s out of a science fiction movie. He wants to get the public excited, and that excitement can attract investors, ” Cáceres said.

If SpaceX does not attract NASA funding for BFR development, then the company might rely on space tourism, contracts with government and commercial interests to launch cargo and satellites, and profits from SpaceX’s planned constellation of 12,000 internet-providing satellites, called Starlink, to pay the ambitious program’s bills.

“People can’t say, ‘Musk is all talk.’ He has accomplished so much in a short amount of time,” Cáceres said. “When I was at trade shows 10 years ago, when I asked Boeing and others about SpaceX, they rolled their eyes and said, ‘They aren’t going to be around very long.’ Now SpaceX is the major player in the industry.”

Are you a SpaceX employee or aerospace-industry insider with information to share? Email Dave Mosher or use more secure options listed here.