SpaceX’s Crew Dragon spacecraft may be set to take its first human passengers to space before the end of the year according to CEO Elon musk.

In a tweet on Wednesday, Musk said that the both the Crew Dragon capsule and the Falcon 9 rocket that is designed to propel it into space are on pace to finish testing in the next 10 weeks.

‘For what it’s worth, the SpaceX schedule, which I’ve just reviewed in depth, shows Falcon & Dragon at the Cape & all testing done in ~10 weeks,’ wrote Musk in a tweet.

While the prediction is an exciting one, it’s worth noting that Musk is known to over-inflate timelines – famously he claimed his company Tesla would develop fully autonomous cars by 2017.

The last hurtle before being approved for the major step will be a critical launch trial in which the Crew Dragon’s In-Flight Abort functions are tested.

During this test, the craft is launched into high-altitude and is tasked with aborting the capsule during high-velocity, the most stressful point of the launch.

The upcoming test will be particularly noteworthy considering the fact that others like have gone horribly awry this year.

In April SpaceX was testing Dragon’s abort when an error resulted in the destruction of SpaceX’s Crew Dragon capsule, engulfing it in flames.

These thrusters will play a critical role in future launches with astronauts on board; they’re designed to safely steer the capsule away from the rocket in the case of an emergency. 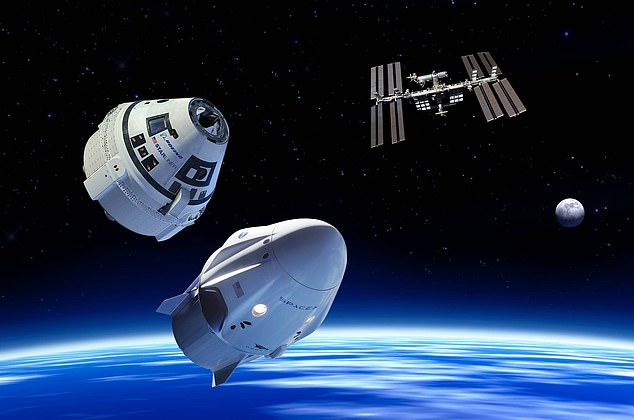 The capsule is designed to eventually shuttle both astronauts and commercial passengers into space and is poised to kickstart a space tourism industry.

WHAT IS SPACEX’ CREW DRAGON CAPSULE?