Widespread use of nitrogen-based fertiliser is jeopardising ambitious climate targets and putting the world at risk of overshooting the Paris Agreement.

It is less prevalent than carbon dioxide, but is 300 times more potent as a contributor to global warming.

The dangerous gas depletes the ozone layer, which protects us from the harmful ultraviolet rays of the sun, and remains in the atmosphere for a century.

A landmark study has found human-induced emissions of the chemical have surged since the 1980s, increasing by 30 per cent over the past four decades.

This figure is increasing every year at a rate of around 1.4 per cent, according to the data.

The researchers warn that if N2O continues being spewed out at its current rate, global temperatures will soar to 3°C above pre-industrial levels by 2100.

The Paris Agreement is a landmark set of environmental targets signed by almost all nations in 2015, which aims to limit warming by the end of the century to less than 2°C, but hopes to hit its more ambitious target of 1.5°C. 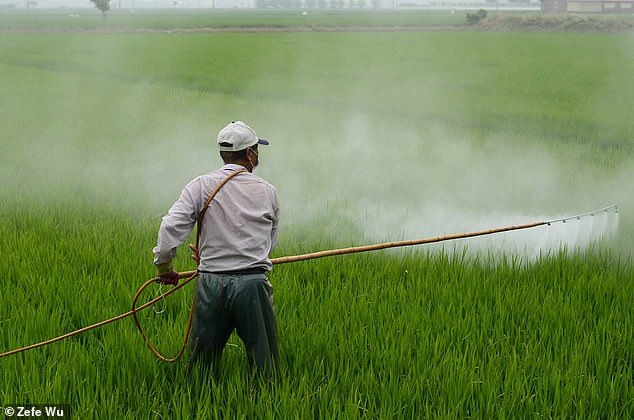 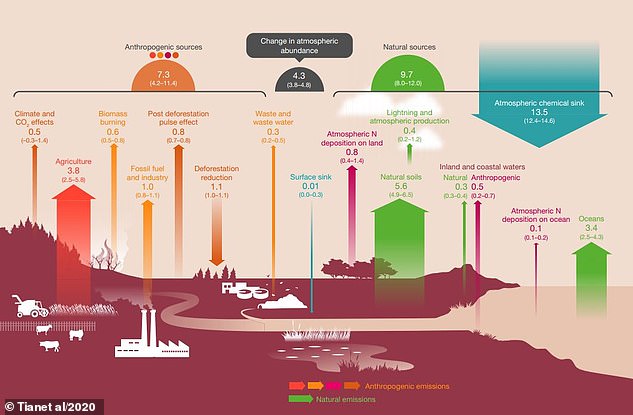 An international team of researchers found the agricultural release of nitrous oxide totals 3.8 trillion grams (3.8Tg) of nitrogen a year, more than half of all man made N2O emissions. Pictured, all sources and sinks of N20, according to the latest research

An international team of researchers from 48 institutions, including the University of East Anglia in England, and led by Professor Hanqin Tian at Auburn University, have published a study mapping the world’s nitrogen cycle.

Researchers uncovered the alarming increase by comparing the current amount of atmospheric N2O (331 parts per billion in 2018) to pre-industrial levels (270 ppb in 1750).

‘The remaining one-third comes from livestock manure, with the emissions being the result of microbial processes that break down nitrogen-containing compounds in the soil and oceans.

‘These are the same microbial processes that lead to natural nitrous oxide emissions.’

The researchers broke down where nitrous oxide comes from (the source) and where it is absorbed (the sink).

They found that while nitrous oxide is a major contributor to the agricultural source, it also adds to the cumulative total indirectly.

For example, nitrogen trapped in fertiliser and manure can be transported to other regions away from their original location.

‘Excess nitrogen may be transported to other places through water runoff and atmospheric dispersion, which leads to further nitrous oxide emissions,’ explains Dr Peters. 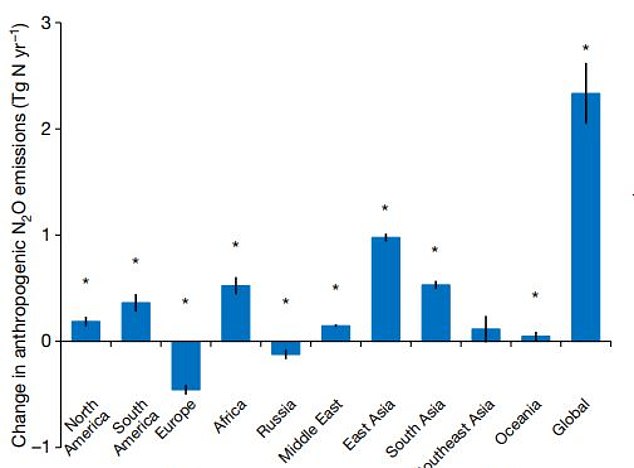 The study data shows that only two regions — Europe and Russia — have decreased their manmade N2O emissions since 1980 (pictured). In Europe, this is attributed to several factors, including the removal of N2O from flue gases, an emissions trading scheme and more efficient use of fertiliser

These indirect emissions are responsible for around 15 per cent of the global N2O output, and are also growing at a rate of around one per cent a year.

‘The dominant driver of the increase in atmospheric nitrous oxide comes from agriculture, and the growing demand for food and feed for animals will further increase global nitrous oxide emissions,’ says Professor Tian.

‘There is a conflict between the way we are feeding people and stabilising the climate.’

The study data shows that only two regions — Europe and Russia — have decreased their man-made N2O emissions since 1980.

In Europe, this is attributed to several factors, including the removal of N2O from flue gases, an emissions trading scheme and more efficient use of fertiliser.

East Asia is the region that has experienced the most dramatic increase in the last four decades, primarily driven by synthetic fertilisers.

Fertiliser is also thought to be behind surging emissions from India and the US, whereas Africa and South America, other major polluters, are mainly due to the use of livestock manure as fertiliser.