The European Union has warned Facebook it is losing patience with the social network’s failure to comply with new transparency rules.

Facebook faces sanctions unless it complies with EU demands to tell its 380 million European users how it uses their data to make money.

EU Consumer Commissioner Vera Jourova said she’s still waiting for results from long-running discussions with the firm over updating its terms of service. 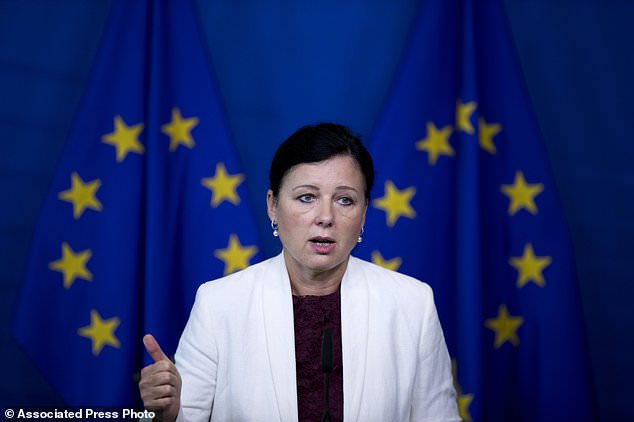 EU Consumer Commissioner Vera Jourova said she’s still waiting for results from long-running discussions with Facebook over updating its terms of service. Pictured is Jourova during a news conference at the European Commission headquarters in Brussels Thursday

‘I will not hide that I am becoming rather impatient because we have been in dialogue with Facebook almost two years and I really want to see, not the progress – it’s not enough for me – but I want to see the results,’ Jourova said.

The EU wants Facebook to give users more information about how their data is used and how it works with third party makers of apps, games and quizzes.

It has been pressing the US tech company to look at what changes it needs to make to better protect users.

The concerns took on greater urgency after the Cambridge Analytica data privacy scandal erupted, in which data on 87 million Facebook users was allegedly improperly harvested.

‘We want Facebook to be absolutely clear to its users about how their service operates and makes money,’ she said. Jourova expects to receive the company’s proposed changes by mid-October so they can go into effect by December.

Facebook said it has already updated its terms of service in May to incorporate changes proposed at that point by EU authorities.

‘Our terms are now much clearer on what is and what isn’t allowed on Facebook and on the options people have,’ the company said in a statement. 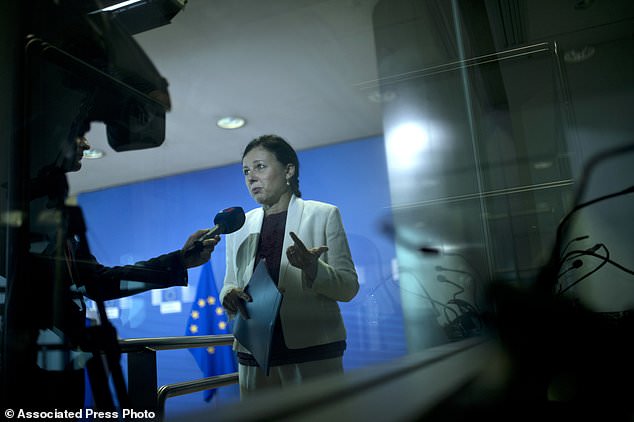 Jourova also said U.S.-based property rental site Airbnb has agreed to clarify its pricing system in response to complaints that it could mislead consumers.

Airbnb has promised to be fully transparent by either including extra fees in the total price for a booking quoted on its website or notifying users that they might apply, she said.

The company is complying with EU demands spurred by concerns that consumers could be confused by its complicated pricing structure, which could add unexpected costs such as cleaning charges at the end of a holiday.

Airbnb is also changing its terms of service to make it clear that travelers can sue their host if they suffer personal harm or other damages.

That’s in response to complaints that its booking system can leave tourists stranded if the rental is canceled when all other arrangements have been already made.

Airbnb said ‘guests have always been aware of all fees, including service charges and taxes, before booking listings,’ and that it’s pleased to work with authorities to make this even clearer.

WHAT IS THE EU’S GENERAL DATA PROTECTION REGULATION?

The European Union’s General Data Protection Regulation (GDPR) is a new data protection law that entered into force on May 25, 2018.

It aims to strengthen and unify data protection for all individuals within the European Union (EU).

This means cracking down on how companies like Google and Facebook use and sell the data they collect on their users.

The law will mark the biggest overhaul of personal data privacy rules since the birth of the internet.

Under GDPR, companies are required to report data breaches within 72 hours, as well as to allow customers to export their data and delete it.

Part of the expanded rights of data subjects outlined by the GDPR is the right for data subjects to obtain from the data controller confirmation as to whether or not personal data concerning them is being processed, where and for what purpose.

Further, the controller must provide a copy of the personal data, free of charge, in an electronic format.

This change is a dramatic shift to data transparency and empowerment of data subjects.

Under the right to be forgotten, also known as Data Erasure, are entitled to have the data controller erase their personal data, cease further dissemination of the data, and potentially have third parties halt processing of the data.

The conditions for erasure include the data no longer being relevant to original purposes for processing, or a data subject withdrawing their consent.

This right requires controllers to compare the subjects’ rights to ‘the public interest in the availability of the data’ when considering such requests.