A type of eel which migrates across the Atlantic Ocean can use the Earth’s magnetic field to create memories, scientists have discovered.

The European glass eel has a sense, like how humans can hear or see, which senses magnetism and can create physical memories of which way currents flow.

They develop this memory in their early life and it helps them to navigate vast stretches of water for the rest of their lives.

They were found to learn the direction of the water current in relation to north in the estuary where they are born so they could return later in life to spawn and die.

Researchers say the discovery is the first direct evidence that any species of fish can use its internal magnetic compass to form a memory of current direction. 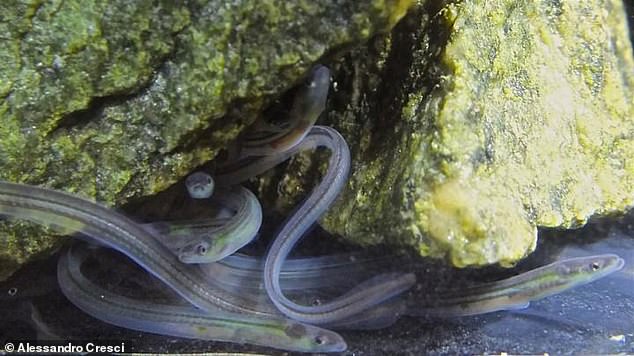 The study led was done by researchers at the Institute of Marine Research in Norway.

The team picked a group of 200 eels out of wild waters in Norway and took them into a lab to test their navigation abilities.

When they were put in a tank in which scientists could manipulate which way felt like north, they found the eels were not confused by it and retained their sense of direction.

They were instead able to work out which way the tide would have been flowing, in relation to true north, in the estuary in which they were born.

Put simply – the eels could remember which way to swim even when scientists tried to trick them into going in a different direction.

Alessandro Cresci, a Ph.D. student at the UM Rosenstiel School and first author of the paper said: ‘It’s an important step forward in understanding the migratory behaviour of the commercially important European eel and in expanding our knowledge of the orientation mechanisms that fish use to migrate.

‘This research should provide awareness that tiny young eels can accomplish incredible tasks to migrate.’

The European eel (Anguilla anguilla) is a migratory species that crosses the Atlantic Ocean twice during its life.

After hatching in the Sargasso Sea near North America, eel larvae move more than 3,000 miles with the Gulf Stream until they reach the continental slope of Europe.

There, they turn into the post-larval transparent glass eel and continue the migration across the continental shelf to the coast.

After reaching the coast, glass eels enter estuaries, where some of them continue their migration upstream into freshwater until later in life (up to 50 years) when, as silver eels, they navigate back to the Sargasso Sea to spawn and die.

‘This study complements previous findings showing innate magnetic sense in glass eels and highlights the importance of understanding the complexities of larval behaviour. There is a lot we need to learn’.

The research was published in the journal Nature Communications Biology.

WHAT DO WE KNOW ABOUT EUROPEAN EELS?

Eels begin life as larvae called Leptocephalus, but despite the efforts of modern science, virtually nothing is known about how they reproduce.

Glass eels grow into golden yellow ‘elvers’ and make their way into rivers, streams and creeks to feed on insects, worms and smaller water organisms. They can be found anywhere on the coasts between Norway and Egypt.

They can take 10 to 15 years to mature, and eventually become ‘silver eels’ about three feet (one metre long), with a dark-grey colouring on their back and silver bellies.

The European eel is classified ‘critically endangered’ by the International Union for Conservation of Nature and Natural Resources.

The cause for the decline in eel population is not known, but excessive fishing, the presence of polychlorinated biphenyl pollutants, used in industry, and a viral infection are suspected by the scientific community.