Scientists in the US have described how a normal face mask injected with antiviral chemicals can ‘deactivate’ the coronavirus.

Their concept uses phosphoric acid and copper salt to kill the virus, which cover a layer of polyaniline – a polymer that could coat ordinary face mask fabric.

Widely-available face masks feature a layer of non-woven bonded fabric – commonly made of polypropylene – which gives them high strength.

By simulating inhalation, exhalation, coughs and sneezes in the laboratory, the researchers found that some non-woven fabrics sanitized up to 82 per cent of escaped respiratory droplets. 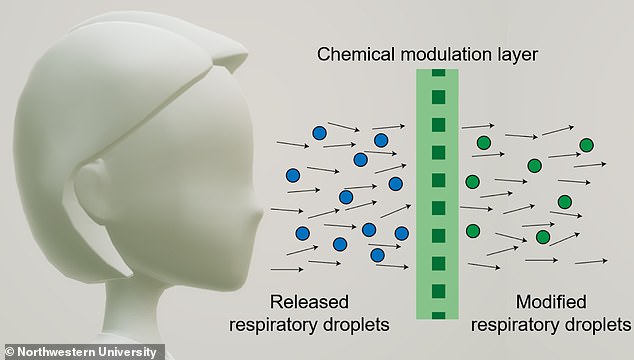 The chemical layer could offer an improvement on normal face masks, which doesn’t prevent all viral-laden droplets from escaping from the wearer’s mouth and nose.

‘Masks are perhaps the most important component of the personal protective equipment needed to fight a pandemic,’ said study leader Jiaxing Huang at Northwestern University in Illinois.

‘We quickly realized that a mask not only protects the person wearing it, but much more importantly, it protects others from being exposed to the droplets and germs released by the wearer.’

Although masks can block or reroute exhaled respiratory droplets, many droplets and their embedded viruses still escape.

From there, virus-laden droplets can infect another person directly or land on surfaces to indirectly infect others.

They wanted to identify molecular anti-viral agents such as acid and metal ions that can readily dissolve in escaped droplets. 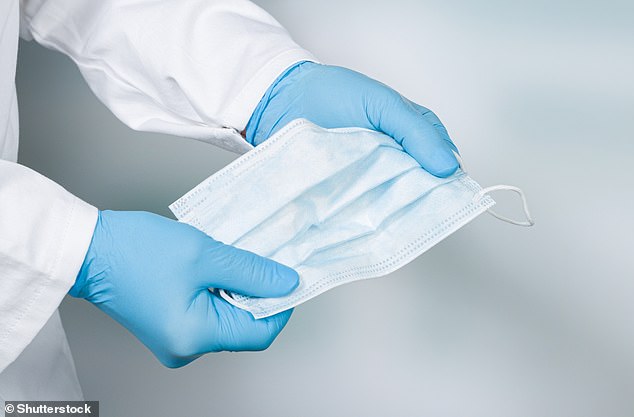 Although masks can block or reroute exhaled respiratory droplets, many droplets (and their embedded viruses) still escape. From there, virus-laden droplets can infect another person directly or land on surfaces to indirectly infect others. Huang’s team aimed to chemically alter the escape droplets to make the viruses inactivate more quickly

Neither of these could be potentially inhaled by the face mask wearer and both create a local chemical environment that damages SARS-CoV-2’s viral envelope – its outermost layer.

‘Virus structures are actually very delicate and brittle [and] if any part of the virus malfunctions, then it loses the ability to infect,’ Huang said.

Huang’s team grew a layer of a conducting polymer polyaniline on the surface of the mask fabric fibers.

The material adheres strongly to the fibers, acting as reservoirs for acid and copper salts.

Coronavirus is a type of enveloped virus, meaning it has an outer lipid membrane that could be damaged by chemicals. Naked viruses lack the viral envelope

The researchers found that even loose fabrics with low-fiber packing densities of about 11 per cent, such as medical gauze, altered 28 per cent of exhaled respiratory droplets by volume.

For tighter fabrics, such as lint-free wipes, the type of fabrics typically used in the lab for cleaning, 82 per cent of respiratory droplets were modified.

Polyaniline – the polymer they used to coat the fabrics – is a great colour indicator for acid itself as it turns from dark blue to green.

It was therefore able to measure and quantify the degree of chemical modification of escaped droplets.

Optical microscopy image (left) in reflectance mode shows drying marks of all droplets collected on a polyaniline film, but only those modified by acid (right) are visible under as they change the colour of the underlying polyaniline film from blue to green. Scale bar: 200 microns

People wear face masks to protect others from the viral droplets that they might be emitting, rather than to protect themselves.

US Democratic presidential nominee Joe Biden recently had to remind President Donald Trump of this fact, saying that face masks should be ‘viewed as a patriotic duty to protect those around you’.

‘There seems to be quite some confusion about mask wearing, as some people don’t think they need personal protection,’ Huang said.

‘Perhaps we should call it public health equipment (PHE) instead of PPE.’

The mask concept is detailed further in the journal Matter.

Face masks must be worn on public transport and in many indoor spaces, including shops, shopping centres, indoor transport hubs, museums, galleries, cinemas and public libraries.

If necessary, the police and Transport for London (TfL) officers have enforcement powers including issuing fines of £200 (halving to £100 if paid within 14 days).

It comes after the World Health Organisation and numerous studies suggested they are beneficial.

As announced, the Government will bring forward changes to mean that for repeat offenders these fines would double at each offence up to a maximum value of £6,400.

The Prime Minister has also announced tougher enforcement measures, with businesses facing fines or closure for failing to comply with coronavirus rules, meaning there will be consequences for pubs that try to serve you at the bar.

National Police Chiefs’ Council chairman Martin Hewitt said: ‘Individuals, businesses and households all have a responsibility to ensure the virus is suppressed and police will play their part in supporting the public to navigate the measures in place for our safety.

‘Our approach of engaging with people and explaining the regulations in place will remain. The vast majority of situations are resolved following those two stages, with little need for further encouragement or enforcement action to be taken,’ he said.

‘Police will continue to work with their communities and only issue fines as a last resort.

‘Chiefs will be stepping up patrols in high-risk areas and will proactively work with businesses, licensing authorities and local authorities to ensure the rules are being followed.

‘If members of the public are concerned that the law is being broken or they are experiencing anti-social behaviour, they can report this to the police, who will consider the most appropriate response and will target the most problematic behaviour.’