Protective items such as gloves and face masks are now found on almost a third of all British beaches following a spike in use due to the coronavirus pandemic.

This year, volunteers were asked to adopt a 100-metre stretch of beach themselves, and organise their own, smaller beach-cleans with family friends and ‘bubbles’, in line with Government guidance.

For the first time volunteers were asked to record the number of face masks and plastic gloves they found.

Those items were found on almost 30 per cent of beaches cleaned by Marine Conservation Society volunteers during the week-long event. 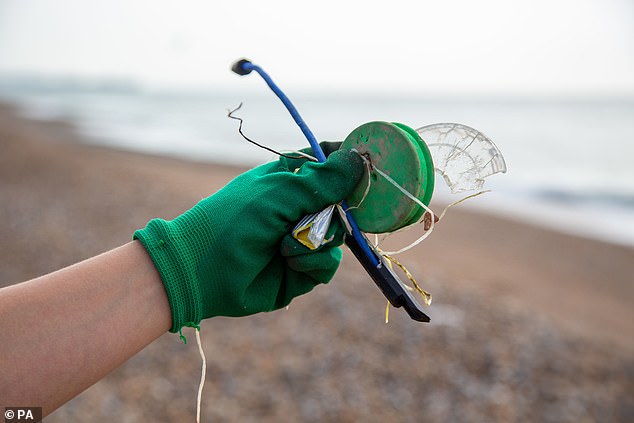 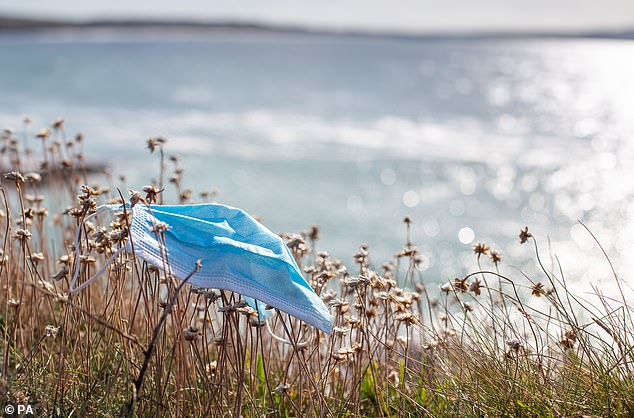 For the first time volunteers were asked to record the number of face masks and plastic gloves they found. Those items were found on almost 30 per cent of beaches cleaned by Marine Conservation Society volunteers during the week-long event. 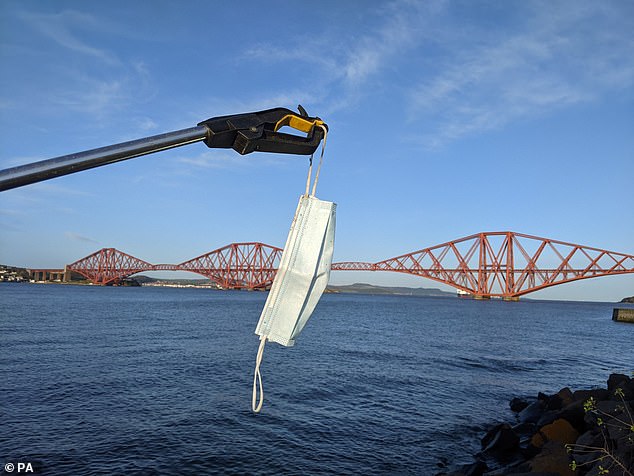 The results were supported by inland data collected by volunteers embarking on the charity’s Source To Sea Litter Quest, which revealed that more than two-thirds (69%) of litter-picks found PPE.

Great British Beach Clean co-ordinator Lizzie Prior said: ‘The amount of PPE our volunteers found on beaches and inland this year is certainly of concern.

‘Considering mask-wearing was only made mandatory in shops in England in late July, little more than three months before the Great British Beach Clean, the sharp increase in PPE litter should be a word of warning for what could be a new form of litter polluting our beaches in the future.’

Like many other single-use items, disposable face masks and gloves pose a threat to wildlife on land and at sea.

Marine animals could mistake face masks and gloves for prey, filling their stomachs with materials which will not break down and could prove to be fatal.

Drinks litter continues to be found on UK beaches, with an average of 30 drinks containers, caps and lids being found per 100 metre of beach surveyed this year.

The charity said this illustrates the need for a bottle deposit return scheme to be adopted across the UK, not just in Scotland.

Dr Laura Foster, head of clean seas at the Marine Conservation Society, said: ‘This year’s Great British Beach Clean data, in addition to the Source To Sea Litter Quest data, shows just how crucial it is that Wales, England and Northern Ireland follow in the footsteps of Scotland and urgently introduce an all-inclusive deposit return scheme.

‘Despite lockdown, with many of us spending more time at home, littering in public spaces has continued unabated.

‘Almost every single local litter-pick found at least one drinks container, which is incredibly concerning.

‘An effective deposit return scheme would take the UK one step closer to a circular economy model and drastically reduce the volume of single-use pollution in the UK’s streets, parks and on our beaches.’

Hand sanitiser has been in high demand globally during 2020, but the 70% alcohol gel which kills bacteria and viruses (including COVID-19) often comes in a plastic bottle.

To reduce plastic consumption, consider switching to a bar of soap and warm water for washing your hands.

Bars of soap can often be found in entirely biodegradable packaging, making the impact on the environment considerably less than hand sanitiser.

Alternatively, opting for liquid soap which can be refilled would allow you to reduce your plastic consumption without major changes to your lifestyle.

Ensuring you follow hand washing advice, the government states washing your hands is as effective as hand sanitiser for reducing the risk of getting ill.

Scientists at UCL have estimated that if every person in the UK used one single-use mask each day for a year, we would create 66,000 tonnes of contaminated plastic waste and create ten times more climate change impact than using reusable masks.

In a hospital environment, single-use protective wear such as masks and gloves are contaminated items, and there are systems in place for their safe disposal, which involve segregation and incineration.

However, evidence suggests that reusable masks perform most of the tasks of single-use masks without the associated waste stream.

Material, reusable masks present a great eco-friendly alternative as long as they are washed after each use.

In October 2015, the government introduced new laws to curb the use of plastic bags in the UK.

Since then, the number of plastic bags in the UK has dropped.

The coronavirus, however, has seen more people turn to disposable bags, with several states in the USA banning reusable bags entirely.

Whilst the evidence is still unclear about how long COVID-19 can live on clothing, Vincent Munster, from the National Institutes of Health told the BBC that the NIH speculates ‘it desiccates rapidly’ on porous materials.

General advice is instead of ditching reusable bags, to ensure they are washed regularly and anyone who comes into contact with them also washes their hands.

Coffee cups have been a large focus for plastic-free campaigners in recent years.

However, as lockdown restrictions have eased and coffee shops have begun to reopen, many are returning to throw-away coffee cups to reduce the risk of contracting the virus.

Several large coffee chains, which previously accepted reusable coffee cups, have also halted the use of them amid safety concerns.

Despite widespread concerns, more than 100 scientists, doctors, and academics have endorsed the sensible use of reusable containers as safe and unlikely to contribute to the further spread of COVID-19.

Reusable cups should be washed thoroughly with hot water and soap.

As pubs reopened at the weekend, many were turning to plastic cups in order to aid takeaway orders and to reduce the need for staff to touch used glasses.

Similarly to the reusable coffee cups, if washed thoroughly, a reusable glass or tumbler could be a simple sustainable swap to help curb the growing coronavirus waste problem.

Ours to Save, a platform for global climate news, and EcoDisco, a sustainable events company, have created the #PlasticFreePints initiative to encourage pub-goers to use reusable alternatives in place of the typical single-use plastic on offer.