Instagram’s Reels feature that is designed to rival TikTok has launched in more than 50 countries worldwide, including the UK, US and Australia.

Short-form video editing tools are now available in Reels, allowing users to get creative and make 15-second clips with captions and music.

The roll-out of the feature comes as TikTok, the hugely popular Chinese app, is embroiled in an international controversy and faces being banned in the US. 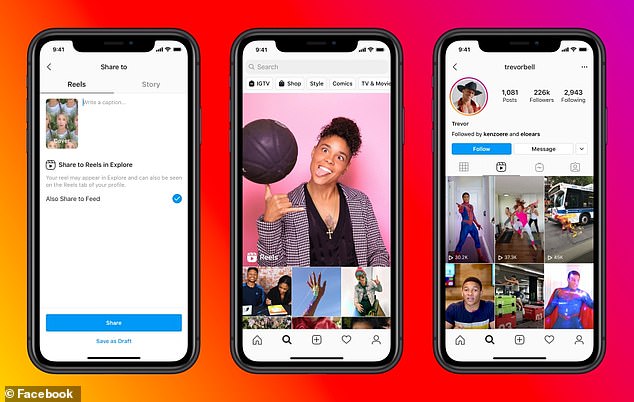 Reels looks startlingly similar to TikTok and is aimed at the same audience.

Instagram is using its Explore page as a landing spot for Reels, with the new feature appearing at the top of the screen and allowing users to vertically scroll through content.

This is very similar to the ‘For You’ page on TikTok.

Those similarities led TikTok Chief Executive Kevin Mayer to call Reels a ‘copycat product’ that could coast on Instagram’s enormous existing user base after ‘their other copycat Lasso failed quickly.’

Lasso was a standalone app which Facebook launched in an attempt to lure users away from TikTok, but it failed to gain traction and was shut down on July 10.

Vishal Shah, Instagram’s vice president of product, has acknowledged the similarities between TikTok and Reels.

In a video call with reporters he said that ‘inspiration for products comes from everywhere’.

‘I think the consumer product ecosystem is one that’s constantly being inspired by the things that people are doing around then, whether that’s internally in your own organisation or more broadly,’ he told the PA news agency.

‘I think the fact that people have a choice and that they can pick from a different set of apps to use and find the one that works for them, I think, is great.

‘I also think that not any one company can invent everything – we take for granted now that it’s very common for mobile products to have a feed, that was new when Facebook brought it to scale.’

TikTok will reportedly open a London HQ in a move approved by ministers risking a major row with Donald Trump over the Chinese app.

The investment is set to be unveiled next week by ByteDance, who own the popular social media platform, as reported by The Sun.

However the move risks opening up a rift with the US who have accused the company of passing personal data to Chinese government.

US President Trump said on Friday he would soon ban TikTok in the United States, and critics have claimed users’ personal data could be at risk.

Secretary of State Mike Pompeo said on Sunday that Trump would take action on what he sees as a broad array of national security risks presented by firms connected to the Chinese government.

The launch of Reels escalates a bruising fight between Facebook and TikTok, with each casting the other as a threat.

Both have been eager to attract American teenagers, many of whom have flocked to TikTok in the last two years.

Reels was first tested in Brazil in 2018 and then later in France, Germany and India, which was TikTok’s biggest market until the Indian government banned it last month following a border clash with China.

Facebook also tried out a standalone app called Lasso which did not gain much traction.

Facebook and its daughter companies, including WhatsApp and Instagram, have previously been accused of using similar copycat techniques, notably imitating Stories from Snapchat.

It faced such allegations at a US congressional hearing last week.

Mr Shah said: ‘(Introducing) Stories in 2016 was one where we give full credit to Snapchat in terms of inventing the format and we then absolutely took it and made it our own.

‘I think of short-form video in very much the same vein – TikTok certainly didn’t invent short-form video, I think they’ve done a lot of really amazing work to make it their own, and I think we’ve been inspired by that great work, but then want to take that and integrate that into Instagram in a different way.’

Instagram is not yet planning to offer advertising or other ways for users to make money through Reels.

However, it did recruit young online stars like dancer Merrick Hanna and musician Tiagz – who was recently signed by Sony/ATV after rising to fame via TikTok memes – to test the product ahead of launch.

The company paid the creators for production costs, Shah said.

‘They’re a huge monstrous threat [to TikTok],’ he said. ‘The current turmoil couldn’t be playing more into [Instagram’s] court to launch this thing.’

The Reels debut comes days after Microsoft said it was in talks to acquire TikTok’s US operations from China’s ByteDance.

ByteDance has agreed to divest parts of TikTok, sources have said, following the pressure from the White House.

Donald Trump has cited security concerns for his wanting to eradicate the app from the US, due to the closeness between TikTok’s parent company ByteDance and the Chinese government.

TikTok has repeatedly dismissed such allegations.

Ray Walsh, Digital Privacy Expert at ProPrivacy, believes Facebook has launched Reels today to capitalise on the increasingly poor PR image TikTok has, mainly as a result of the US President.

‘TikTok is known to harvest invasive levels of consumer data, which the firm could potentially share with the Chinese government,’ he says

‘The opportunistic release of Instagram’s competing video service is an attempt to position a TikTok-like service on the market in preparation for the potential TikTok ban.’

However, while Donald Trump has threatened to ban the app over its security issues, Mr Walsh believes user data will scarcely be safer in the hands of the US firm.

‘Reels is likely to result in similar kinds of data harvesting to its Chinese counterpart.

‘However, that data will be processed by Facebook; which could easily find itself compelled to share that data with the US authorities via warrants and gag orders.

‘Only time will tell whether Instagram’s new video feature will prove as popular as TikTok, despite Facebook paying successful influencers to promote the service.

‘Its success is also likely to depend on whether TikTok is acquired by Microsoft allowing it to evade a US government ban.’