Fin whales, the second largest mammals in the world behind blue whales, have slow, low pitched notes which make up their lethargic songs.

And now scientists have found, for the first time, that they can sing more than one tune.

In fact, new research reveals they adopt sounds of other fin whales that have migrated from far flung parts of the world. 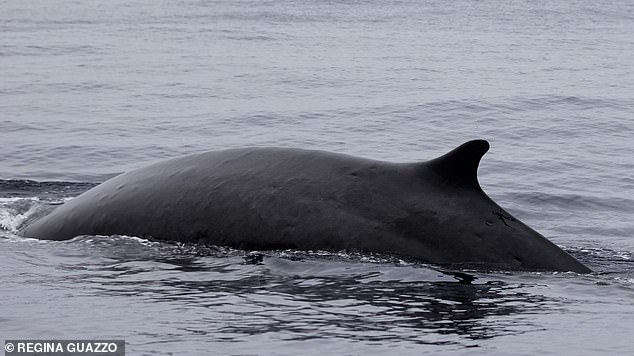 Pictured, a fin whale at the surface off the coast of San Diego, California. Using underwater microphones, the research team recorded the songs and locations of 115 whale encounters near Kauai, Hawaii over six years

The study, published in the journal Frontiers in Marine Science, suggests the ability to sing multiple songs allows certain melodies to spread to different parts of the ocean through migrating individuals.

The research team from the US Naval Information Warfare Center Pacific say understanding fin whale songs allows researchers fresh insight into how their populations move and change over time.

This could help inform better research and protection for the endangered animal.

Study leader Dr Tyler Helble said: ‘There is still a lot of uncertainty around the fin whale population size and structure in the North Pacific, and so learning about the song could help us understand population dynamics in this region much better.

‘Previously, some marine mammal scientists thought that fin whales each sang a single pattern of notes, which was found only within their specific group and region.

‘Our research indicates that fin whale song is more complex than this.’

Using underwater microphones, the research team recorded the songs and locations of 115 whale encounters near Kauai, Hawaii over six years.

Study corresponding author Dr Regina Guazzo, also of the Naval Information Warfare Centre, said: ‘The sound is recorded on multiple hydrophones, allowing us to triangulate on the signal and formulate a position for the animal. 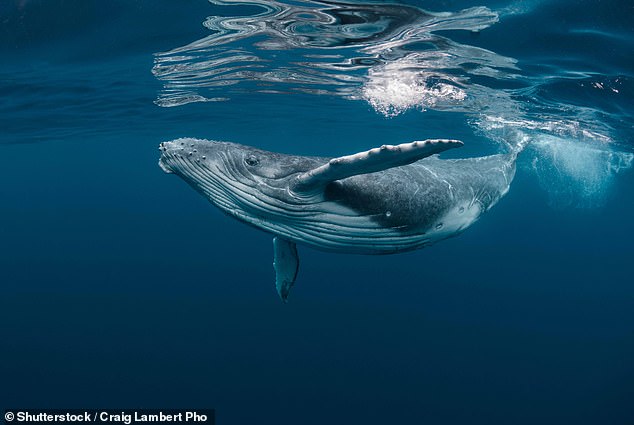 Many whale species, including the blue, humpback (pictured) and fin whales all have unique songs and researcher s are trying to learn more about their purpose and features

‘By showing that different song patterns were coming from the same location, we demonstrated that these were likely made by the same individual’.

She explained that five main song patterns were recorded. Some were unique to the area, but some were similar to song patterns recorded several years before in whale groups off the north-west coast of the US.

Dr Guazzo said: ‘When a new whale song is recorded in a region, researchers often read it as a signal that a new group or individual has arrived from a different part of the world.

‘However, this study suggests that these new song patterns may have been picked up by a local whale on his migratory travels, in a process of cultural transmission between groups from different regions’.

To confirm whether the whales recorded in Hawaiian waters are from a single population or multiple converging pods, the team suggest that scientists should use additional methods of monitoring the whales.

Dr Helble added: ‘Visual identification, genetic analyses, or long-duration tags could be used to determine where these whales go when they are not singing off Kauai.’

An orca named Tahlequah who touched the hearts of people around the world in 2018 after she carried her dead calf for 17 days gave birth to a new baby earlier this year.

The 21 year-old orca — or ‘killer whale’ — gave birth on September 4 to her new calf, dubbed ‘J57’ by researchers, in the eastern Strait of Juan de Fuca in US waters.

According to the Whale Research Center, Tahlequah and her new calf appear to be healthy with the infant ‘swimming vigorously alongside its mother’.

Tahlequah gave birth to one calf in 2010 who survives to this day — ‘J47’, also known as ‘Notch’ — but she also miscarried a calf in mid-2010 before losing the 2018 calf soon after birth. Experts feared she was likely also lose this new one.

Her pregnancy was first reported by whale watchers in July after experts from the Sealife Response, Rehabilitation and Research conservation group spotted that she was larger than usual.

‘We hope folks on the water can give the Southern Residents plenty of space to forage at this important time. With such a small population every successful birth is hugely important for recovery,’ the nonprofit group wrote at the time. 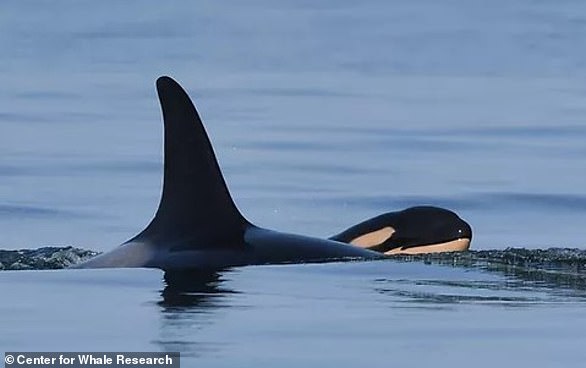