Scientists have discovered an extinct albatross species that lived around three million years ago after finding a near-complete skull in New Zealand.

It was first discovered in 2011 by a private collector on New Zealand’s North Island and new analysis has determined its true identity.

The fossil’s most remarkable trait is the unusually narrow beak which is believed to have allowed it to feast on fish, in stark in contrast with the diet of modern albatrosses, which is dominated by squid.

The bird is thought to have only reached approximately 90 per cent of the size of the smallest modern albatrosses. 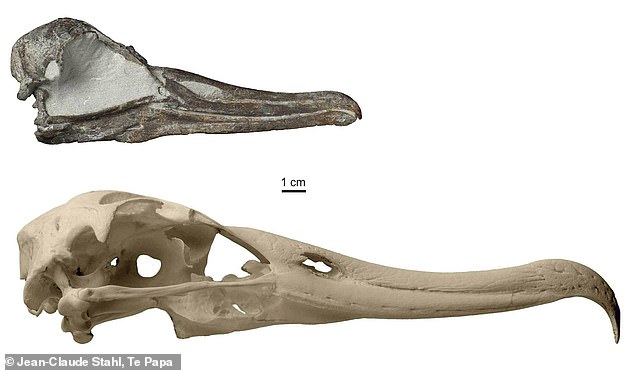 Researchers studying the remains say that the find indicates a higher diversity in the feeding ecology of extinct albatrosses compared to extant species.

However, it presents the thorny issue of why the fish-eating species ultimately went extinct.

‘The new species we described is clearly smaller than all modern albatrosses,’ said Dr. Gerald Mayr of the Senckenberg Research Institute in Frankfurt.

‘Small albatross species are already known from the Eocene and Miocene epochs, but the new fossil is the youngest and most complete of these small forms and the only one of which a skull has been found.’

The avian skull examined by Mayr and his colleague Alan Tennyson differs from all other known albatross species not only in its size; the shape of the beak deviates.

‘The slender beak resembles that of modern seabirds that feed on fish,’ he said.

The ornithologists therefore assume that the newly discovered species preferred a diet of fish, unlike modern albatrosses who primarily hunt for squid.

The discovery shows that albatrosses had a more diversified feeding ecology in the past.

However, it remains an enigma why these small, fish-eating species ultimately went extinct.

‘It is possible that they shared similar ecological niches with other seabirds such as boobies or cormorants during the Pliocene and ultimately succumbed to competition with these birds’ said Dr Mayr.

‘However additional fossils from the avifaunas of that time are needed to properly test this hypothesis.’

The research is published in the scientific journal Ibis.

WHAT WAS THE EOCENE EPOCH?

The oldest known fossils of most of the modern orders of mammals appear in a brief period during the early Eocene and all were small, under 10 kg.

Both groups of modern ungulates, Artiodactyla and Perissodactyla, became prevalent mammals at this time, due to a major radiation between Europe and North America.

The early Eocene (Ypresian) is thought to have had the highest mean annual temperatures of the entire Cenozoic Era, with temperatures about 30°C.

It also had relatively low temperature gradients from pole to pole and high precipitation in a world that was essentially ice-free.

It was an important time of plate boundary rearrangement, in which the patterns of spreading centres and transform faults were changed, causing significant effects on oceanic and atmospheric circulation and temperature.

In the middle Eocene, the separation of Antarctica and Australia created a deep water passage between those two continents, creating the circum-Antarctic Current.

This changed oceanic circulation patterns and global heat transport, resulting in a global cooling event observed at the end of the Eocene.

By the Late Eocene, the new ocean circulation resulted in a significantly lower mean annual temperature, with greater variability and seasonality worldwide.

The lower temperatures and increased seasonality drove increased body size of mammals, and caused a shift towards increasingly open savanna-like vegetation, with a corresponding reduction in forests.