Fossilised APE tooth unearthed in India belongs to the earliest known ancestor of the modern-day gibbon that lived 13 million years ago, study finds

A newly discovered fossilised ape tooth found in India is the earliest known ancestor of the modern-day gibbon and it lived 13 million years ago, study finds.

The fossil belongs to a new species of ape named Kapi ramnagarensis and was discovered by fossil hunters at the Ramnager dig site in northern India.

Experts from Arizona State University worked with Christopher C Gilbert of Hunter College who discovered the tooth in 2015 to uncover its place in the tree of life.

Researchers say Kapi is the first new ape species to be found at the famous site Ramnager site over 100 years and fills major gaps in the hominoid fossil record.

Finding evidence a gibbon ancestor lived in northern India 13 million years ago suggests they followed a similar migration from Africa to Asia as other apes.. 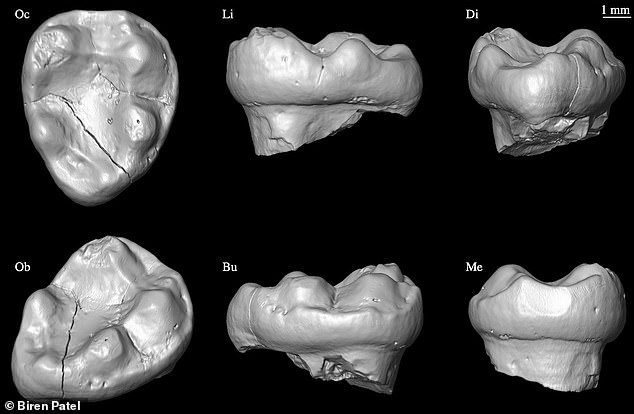 This is the scan of a newly discovered fossilised ape tooth found in India. It was the earliest known ancestor of the modern-day gibbon and it lived 13 million years ago, study finds

Gilbert’s find was serendipitous, according to the Arizona researchers who have been studying the fossil for the past five years.

The fossil hunter was climbing a small hill with team mates in an area where a fossil primate jaw had been found the year before.

While pausing for a short rest, Gilbert spotted something shiny in a small pile of dirt on the ground, so he dug it out and quickly realised he’d found something special.

‘We knew immediately it was a primate tooth, but it did not look like the tooth of any of the primates previously found in the area,’ Gilbert said of the chance find. 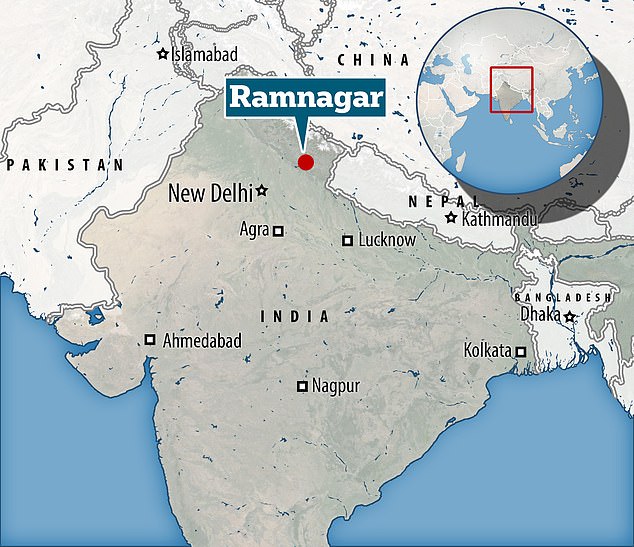 ‘From the shape and size of the molar, our initial guess was that it might be from a gibbon ancestor, but that seemed too good to be true, given that the fossil record of lesser apes is virtually nonexistent.

‘There are other primate species known during that time, and no gibbon fossils have previously been found anywhere near Ramnagar. So we knew we would have to do our homework to figure out exactly what this little fossil was.’

Experts have spent the past five years analysing and comparing his discovery to other finds in order to verify it belongs to a new species.

The molar was photographed, CT scanned and compared to living and extinct ape teeth to look for differences in order to accurately place it on the ape family tree.

‘What we found was quite compelling and undeniably pointed to the close affinities of the 13-million-year-old tooth with gibbons,’ said researcher Alejandra Ortiz.

‘Even if, for now, we only have one tooth, and thus, we need to be cautious, this is a unique discovery, the Arizona State specialist explained.

‘It pushes back the oldest known fossil record of gibbons by at least 5 million years, providing a much-needed glimpse into the early stages of their evolutionary history.’

In addition to determining that the new ape represents the earliest known fossil gibbon, the age of the fossil, around 13 million years old, is contemporaneous with well-known great ape fossils discovered in the same area. 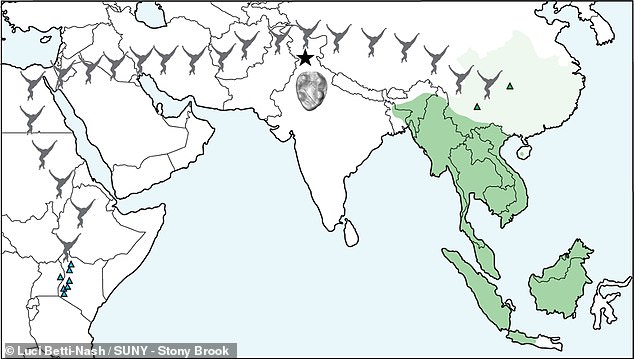 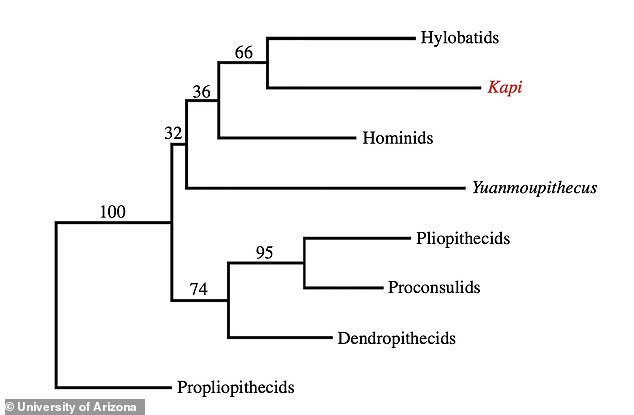 This provides evidence that the migration of great apes – including orangutan ancestors, and lesser apes – from Africa to Asia happened around the same time and through the same places such as northern India.

‘I found the biogeographic component to be really interesting,’ said Chris Campisano, a member of the research team.

‘Today, gibbons and orangutans can both be found in Sumatra and Borneo in Southeast Asia, and the oldest fossil apes are from Africa,’ he explained.

‘Knowing that gibbon and orangutan ancestors existed in the same spot together in northern India 13 million years ago, and may have a similar migration history across Asia, is pretty cool.’

The findings have been published in the journal Proceedings of the Royal Society B.