Croaky they’re big! Frogs that live in wet environments have bigger testicles and higher quality sperm than those in drier regions, study finds

Frogs that live in wet environments have bigger testicles and higher quality sperm than those in drier regions, a new study has found.

Frogs of the Crawling Toadlet species (Pseudophryne guentheri) are native to south-western Australia, and can experience between approximately 300 and 1250 mm of rainfall per year depending on where they live.

The Aussie researchers found that male frogs living in rainier environments have larger testes and more motile sperm than those of the same species in drier areas.

Variation in seasonal rainfall potentially leads to differences in how much time frogs have to mate, which affects ‘sperm competition’ and the sperm’s physical traits, the team speculate.

Sexual characteristics can diverge among populations of the same species, most likely driven by local climate factors like moisture and heat.

‘We found a striking divergence in testes size, sperm quantity, motility and length among P. guentheri populations that corresponded with annual rainfall and rainfall seasonality,’ the scientists from University of Western Australia say in their study.

‘[Our analysis] revealed significant divergence in testes and ejaculate traits that correspond with annual rainfall and rainfall seasonality.’

The arrival of male and female Crawling Toadlets at a breeding site often coincides with moist conditions following rainfall.

Therefore, differences in precipitation between Crawling Toadlet populations ‘may have implications for sperm competition’, according to the researchers.

It’s already known that factors like temperature and precipitation can influence the seasonality and length of the breeding season and the ratio of males to females ready to mate.

But investigations into how the traits of the male reproductive organ vary in different ecologies have produced ‘mixed results’. 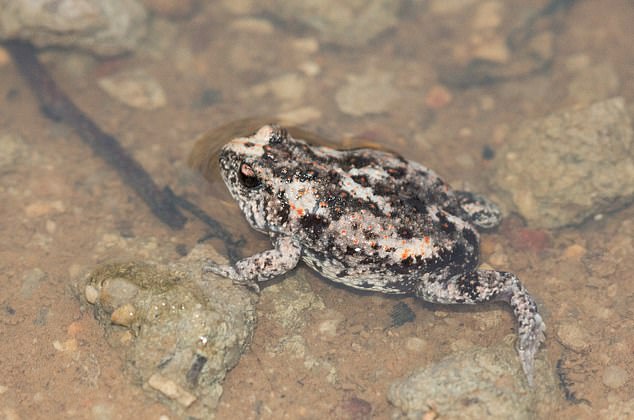 A Crawling Toadlet resting in water. The back has a warty appearance and is mottled with browns and greys

To learn more, the team investigated whether male ‘reproductive investment’ differed among six populations across differing amounts of rainfall.

Male Crawling Toadlets were collected by hand from different breeding burrows, transported to the University of Western Australia, measured, individually housed and fed a diet of small insects.

During measurements, researchers focused on a range of traits related to sperm competition, including testes size, sperm density, sperm length and ‘sperm motility’ – its ability to move independently.

Traits were measured three to eight days after animals were collected from the wild, including extraction of spermatozoon, which was observed under micrographs.

The team found increased sperm quantity, motility, morphology (length of the head and tail) and speed in frogs collected from the wetter sites. 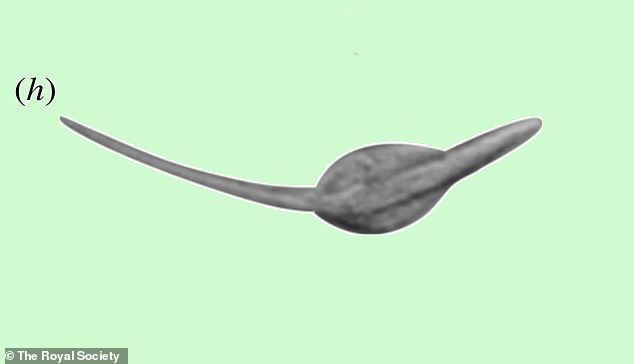 Males from the northern and drier edge of the species range were found to have smaller testes containing fewer, smaller and less motile sperm, meanwhile.

Interestingly, sperm from males found at the wet sites was also narrower, which may help them attain greater speeds.

The team speculate that the the window of mating opportunity is smaller for populations where rainfall is infrequent.

This results in ‘explosive’ breeding patterns in these dryer sites and consequently a relaxation in the level of sperm competition.

Other factors, such as differences in resource availability and genetics, may also play a role in testes and sperm.

The study has been published in Biology Letters.

Crawling Toadlet is a species of frog native to Australia.

The ground-dwelling species has a robust, flattened body, and small head and short limbs, with a warty back, mottled with browns and greys.

A bar between the eyes and an X above the shoulders are often visible. The belly is boldly blotched with black on a white background. There are two large tubercles on the hind feet.

The frogs attain a maximum length of 1.3 inch. Female Crawling Frogs are generally larger and stouter than males.

Breeding begins with the first rains in autumn and continues through to early winter – males excavate a burrow by which they call to attract a female.

Most mating and egg-laying take place before there is water in the ponds and creek lines where they breed.

As many as 100 relatively large eggs are laid singly in damp depressions or burrows excavated by the males.

Males can often be found on a pile of eggs, but these are likely from many females, although males do not actively ‘guard’ the egg pile.

The eggs will develop up to a point then suspend development and hatch when winter rains fill ponds and creeks and eventually flood the burrows.

The tadpoles then hatch out and begin to swim and feed in the water body.

Tadpoles of this species are pear-shaped with the tail length about one and a half times that of the body. The body is mottled with brown and grey in a variety of patterns. Tadpoles attain a maximum length of about 3 cm.

Generally occurs in low-lying areas with moisture. Found in small damp depressions beneath rocks, fallen timber or in shallow burrows amongst leaf litter or fringing vegetation.

The species is also known as Günther’s toadlet, after Albert Günther of the British Museum who named many species of Australian frogs and reptiles.

This species sometimes comes in to contact with Western Toadlet, from which it can be distinguished by its much larger digging tubercles on the feet.