Get ready for the ‘slofie’: Apple coins new term after introducing slow motion selfies with the iPhone 11, sparking hilarious reactions on social media

Apple introduced a slew of products this week, taking the wraps off three new iPhones as well as a new Apple Watch, iPad, and pricing details for its upcoming subscription services.

Unlike previous years, however, it isn’t expensive hardware that’s got everybody talking this time.

During the presentation at the Steve Jobs Theater, Apple revealed the iPhone 11 will for the first time bring slow-motion video capability to the front-facing camera. And, the company has coined a new term to go with it: the ‘slofie.’

The announcement has been met with wildly mixed reviews; while some have latched onto the phrase already, most others are ripping it to shreds on social media.

Apple introduced the term – a combination of the phrases ‘slow motion’ and ‘selfie’ – in an ad displayed during the product launch event. It’s been met with mixed reactions

Among the most common criticism has come in the form of a Mean Girls reference, with many Twitter users dredging up Regina George’s curt dismissal of the word ‘fetch’ in their reactions (i.e. ‘it’s not going to happen.’).

Apple introduced the term – a combination of the phrases ‘slow motion’ and ‘selfie’ – in an ad displayed during the product launch event.

The sentiment was mirrored all across social media.

For the most part, people appear wary only of the corny phrasing and not the feature itself, though some have dubbed it ‘pointless.’

Either way, the capability – and likely an influx of slofie videos – will arrive as soon as next week when the iPhone 11 hits stores on September 20.

The new handset has a dual camera system, boasting a 12-megapixel camera that can switch from wide to ultra-wide, offering up to a 120-degree field of view.

It also achieves 2x optical zoom and an ‘immersive camera interface,’ that will let users ‘see and capture the area outside of the frame,’ according to Apple.

This will be particularly useful ‘for short spaces where you can’t back up.’

It will also have Night Mode, allowing for photos even in very low-light environments, be it outside at night or in a dark restaurant, and can shoot in 4K at up to 60 frames per second, Apple says. 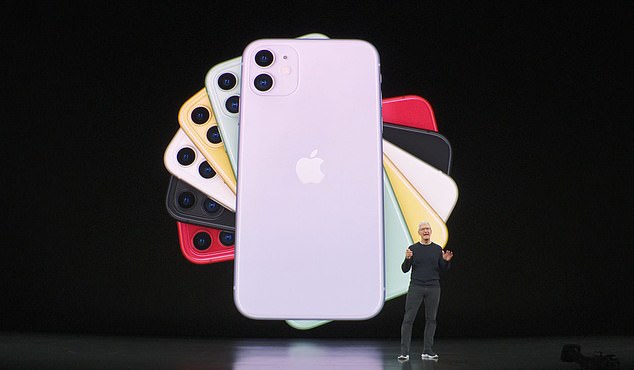