An ancient penguin measuring just 3.5ft tall has been found in the South Pacific, revealing the earliest version of the marine birds similar to those alive today.

It lived more than 60 million years ago and would have been dwarfed by some of its enormous penguin-cousins alive at the time.

The ancient bird is thought to be the oldest penguin ever found to have proportions akin to its modern relatives.

Scientists say the extreme diversity indicates that after the cataclysmic asteroid that wiped out the dinosaurs hit Earth, birds rapidly changed to adapt and some took to the seas to survive. 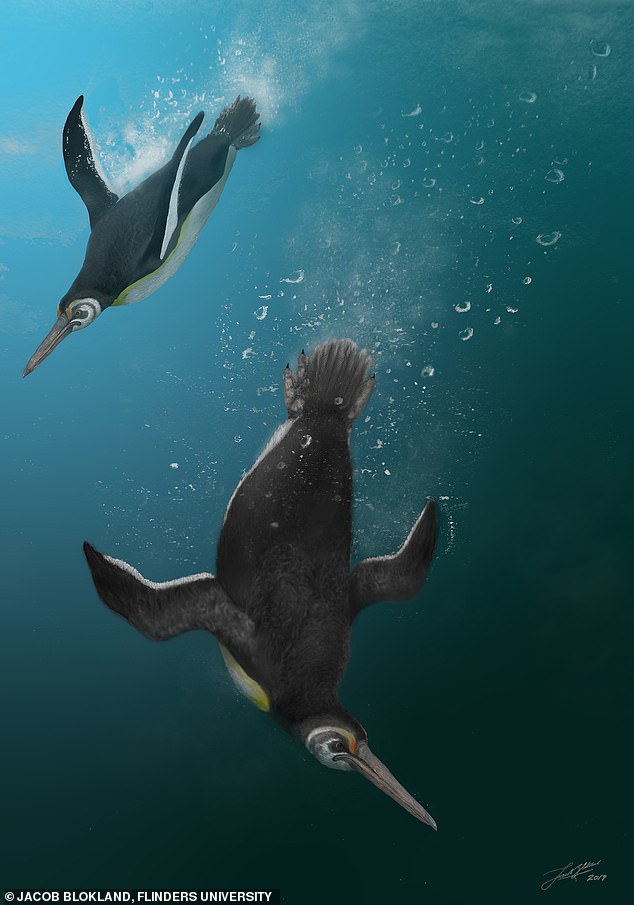 Kupoupou stilwelli (artist’s impression, pictured) was 3.5ft tall and has proportions similar to modern penguins. It lived more than 60 million years ago and would have been dwarfed by some of its enormous penguin-cousins alive at the time

The word ‘megafauna’ is derived from the Latin words for ‘big’ and ‘animals.’

In the context of Australia and New Zealand, it refers to  animals that collectively died out in a mass extinction about 46,000 years ago.

Although many of them were marsupials – including giant kangaroos and wombats as well as other strange beasts like the marsupial lion – there were also huge snakes, lizards and birds in ancient Australia.

These animals had existed here for around 11 million years, then within just a few thousand years, most of these giant animals disappeared.

The fossil was found on the Chatham Islands and fills the void between ancient human-sized giant penguins and the birds alive today.

While it may have been an expert swimmer, like its modern-day relatives, the penguin had short legs that meant it would have waddled on land.

It lived between 62.5 million and 60 million years ago at a time when there was no ice cap at the South Pole and the seas around New Zealand were tropical or subtropical.

‘Kupoupou also had proportionally shorter legs than some other early fossil penguins.

‘In this respect, it was more like the penguins of today, meaning it would have waddled on land.

‘This penguin is the first that has modern proportions both in terms of its size and in its hind limb and foot bones (the tarsometatarsus) or foot shape.’

The animal was named to honour the indigenous Moriori people of the Chatham Island Rekohu – with Kupoupou meaning ‘diving bird’ in Te Re Moriori.

According to the researchers, the discovery may even link the origins of penguins themselves to the eastern region of New Zealand.

University of Canterbury adjunct Professor Paul Scofield, senior curator of natural history at the Canterbury Museum in Christchurch, was involved in the discovery of both ancient penguins.

He said: ‘We think it’s likely that the ancestors of penguins diverged from the lineage leading to their closest living relatives – such as albatross and petrels – during the Late Cretaceous period, and then many different species sprang up after the dinosaurs were wiped out.

‘It’s not impossible that penguins lost the ability to fly and gained the ability to swim after the extinction event of 66 million years ago, implying the birds underwent huge changes in a very short time.

‘If we ever find a penguin fossil from the Cretaceous period, we’ll know for sure.’

WHAT DO WE KNOW ABOUT ANCIENT MEGAFAUNA?

Earth was once inhabited by a variety of giant forms of animals that would be recognisable to us today in the smaller forms taken by their forbears.

They were very large, usually over 88 pounds(40kg) in weight and generally at least 30 per cent bigger than any of their still living relatives.

There are several theories to explain this relatively sudden extinction. The leading explanation of around was that this was due to environmental and ecological factors.

It was almost completed by the end of the last ice age. It is believed that megafauna initially came into existence in response to glacial conditions and became extinct with the onset of warmer climates.

In temperate Eurasia and North America, megafauna extinction concluded simultaneously with the replacement of the vast periglacial tundra by an immense area of forest.

Glacial species, such as mammoths and woolly rhinoceros, were replaced by animals better adapted to forests, such as elk, deer and pigs.

This all happened about 10,000 years ago, despite the fact that humans colonised North America less than 15,000 years ago and non-tropical Eurasia nearly one  million years ago.

Worldwide, there is no evidence of Indigenous peoples systematically hunting nor over-killing megafauna.

The largest regularly hunted animal was bison in North America and Eurasia, yet it survived for about 10,000 years until the early 20th century.