The busiest areas in our galaxy are also the most likely to be barren, scientists have discovered.

Globular clusters are areas in the universe packed with star systems, which are often home to several million stars apiece.

But while this might sound like the ideal place to look for alien life – since there is a greater number of potential planets, the inverse is true.

The close proximity between these stars makes them uninhabitable, as the interfering gravitational fields regularly tug and pull at planets.

The force of gravity is so strong in these densely-packed areas of the universe that planets can be flung into one another, or close to another star.

This happens about once every million years, dramatically altering the conditions on the planet and making the survival of life extremely unlikely. 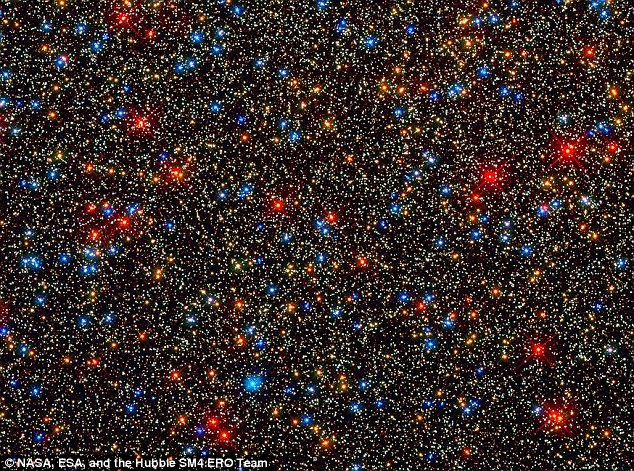 The busiest places in our galaxy are the most likely to be barren, scientists have discovered. Globular clusters (pictured) are jam-packed with star systems that are packed in alongside one another and are often home to several million stars each

The research was done by Stephen Kane from the University of California, Riverside, and Sarah Deveny from San Francisco State University who were using data from the Hubble telescope to study the stars within the Omega Centauri globular cluster.

This is the largest cluster of its kind in the Milky Way – home to 10 million stars.

It’s located about 16,000 light-years from Earth and is in prime position for viewing via the Hubble telescope.

The team were looking for any celestial bodies that orbited in the ‘Goldilocks zone’ – or the habitable zone – of a star.

This is the optimal zone for life to flourish and is reliant on the plausible formation of liquid water, scientists say.

The researchers studied a pool of around 350,000 stars which were of suitable age and temperature to harbour life and were therefore considered to be habitable exoplanets.

Most of the stars that were studied in the research were small red dwarfs, resulting in habitable zones close to their host star – since they are naturally cooler stars.

‘However, since this type of compact star cluster exists across the universe, it is an intriguing place to look for habitability.

‘The core of Omega Centauri could potentially be populated with a plethora of compact planetary systems that harbor habitable-zone planets close to a host star.

‘An example of such a system is TRAPPIST-1, a miniature version of our own Solar System that is 40 light-years away and is currently viewed as one of the most promising places to look for alien life.’

Whilst the habitable region around these stars appears to show life could be sustained, the proximity of nearby stars makes this impossible.

The average distance between stars is about 0.16 light-years, meaning any planets orbiting a star would be greatly affected by the gravitational pull of other stars. 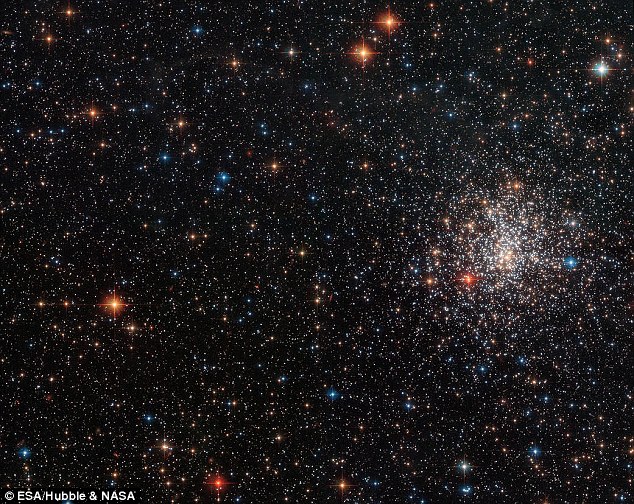 The Omega Centauri globular cluster (pictured)  is the largest cluster of its kind in the Milky Way and is home to around 10 million stars. It is this close proximity that makes them uninhabitable however, as the interfering gravitational fields tugs and pulls at the planets

Gravity is one of the fundamental forces of the universe.

Scientists understand that there are four fundamental forces that act on all things in the universe.

The natural phenomenon is an attractive force that acts on all things, but has a stronger pull on larger objects.

The force is so weak that huge celestial objects are required to have a meaningful impact.

For example, the attraction on Earth is just sufficient to keep humans grounded.

Although it is understood how it works, the workings of how it operated are a mystery.

Scientists have long speculated about the existence of a fundamental particle called the ‘graviton’ which is responsible for the force.

Despite its theoretical logic, the particle is yet to be discovered.

On Earth the force of gravity is measured at 9.8m/s^2.

The nearest star to our Solar System is Alpha Cenatri, which is a relatively distant 4.22 light years away.

At the close 0.16 light-year distance found in Globular clusters, the planets would endure a close encounter with a massive star once every million years.

The planetary route would then be disrupted to such an extent the planets could be sent far into orbit or into a much closer orbit than before, drastically changing the conditions and making the survival of life extremely unlikely.

‘The rate at which stars gravitationally interact with each other would be too high to harbor stable habitable planets,’ explained Dr Deveny.

‘Looking at clusters with similar or higher encounter rates to Omega Centauri’s could lead to the same conclusion.

‘So, studying globular clusters with lower encounter rates might lead to a higher probability of finding stable habitable planets.’

The research is set to be published in the Astrophysical Journal and is currently available on arXiv.

WHAT IS THE STANDARD MODEL OF PHYSICS?

The theories and discoveries of thousands of physicists since the 1930s have resulted in a remarkable insight into the fundamental structure of matter.

Everything in the universe is found to be made from a few basic building blocks called fundamental particles, governed by four fundamental forces.

Our best understanding of how these particles and three of the forces are related to each other is encapsulated in the Standard Model of particle physics.

All matter around us is made of elementary particles, the building blocks of matter.

These particles occur in two basic types called quarks and leptons. Each consists of six particles, which are related in pairs, or ‘generations’.

All stable matter in the universe is made from particles that belong to the first generation. Any heavier particles quickly decay to the next most stable level.

There are also four fundamental forces at work in the universe: the strong force, the weak force, the electromagnetic force, and the gravitational force. They work over different ranges and have different strengths.

Gravity is the weakest but it has an infinite range.

The electromagnetic force also has infinite range but it is many times stronger than gravity.

The weak and strong forces are effective only over a very short range and dominate only at the level of subatomic particles.

The Standard Model includes the electromagnetic, strong and weak forces and all their carrier particles, and explains well how these forces act on all of the matter particles.

However, the most familiar force in our everyday lives, gravity, is not part of the Standard Model, and fitting gravity comfortably into this framework has proved to be a difficult challenge.