Hey Google, do I need an umbrella? Tech giant develops AI ‘now-casting’ system that can accurately predict if it will rain in the next 90 minutes

We’ve all been there: rushing out of the house without an umbrella only to be caught in an unexpected rain shower.

But now experts at Google DeepMind have developed an artificial intelligence-based ‘now-casting’ system which they claim is more accurate at predicting the chances of rain within the next 90 minutes than existing models.

It uses high-resolution radar data from the past 20 minutes to estimate whether medium to heavy rain is likely to fall up to two hours ahead. 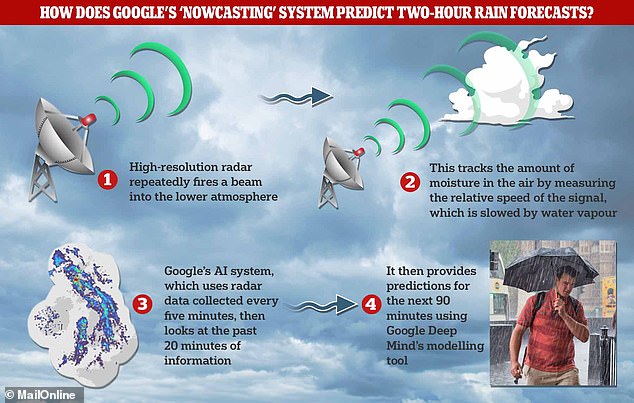 How does it work? This graphic shows how Google DeepMind’s system uses high-resolution radar data from the previous 20 minutes to produce accurate predictions on rainfall to come 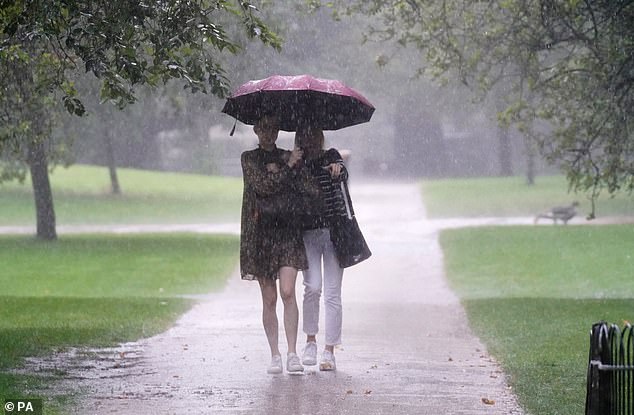 The radar repeatedly fires a beam into the lower atmosphere which then tracks the amount of moisture in the air.

It does this by measuring the relative speed of the signal, which is slowed by water vapour.

Google DeepMind’s AI system, which uses radar data collected every five minutes, then looks at the past 20 minutes of information and provides predictions for the next 90 minutes using a modelling tool.

This is called the Deep Generative Model of Rain (DGMR).

The radar repeatedly fires a beam into the lower atmosphere to track the amount of moisture in the air, which is measured by the relative speed of the signal and how much it is slowed by water vapour.

This data is then used by an AI modelling tool in an attempt to pinpoint the timing, location and intensity of precipitation.

The hope is that it can improve the accuracy of short-term weather forecasts and particularly the prediction of storms and heavy rain.

That’s because current supercomputer models — used to forecast weather on a larger scale over the next day or week — do not fare so well with shorter two-hour timeframes.

They rely heavily on numerical weather prediction (NWP) systems, which use mathematical equations to estimate the chances of rain and other types of weather based on the movement of fluids in the atmosphere.

‘These models are really amazing from six hours up to about two weeks in terms of weather prediction, but there is area – especially around zero to two hours – in which the models perform particularly poorly,’ said Suman Ravuri, a staff research scientist at DeepMind in London and co-lead of the project.

But short-term forecasts for rain are often not as reliable as some experts would like.

The DeepMind team’s tool was evaluated alongside two existing rain prediction systems by more than 50 Met Office meteorologists who ranked it first for accuracy and usefulness in 89 per cent of cases.

However, DeepMind has not said how much more accurate its tool is than current ones used by the Met Office.

‘It’s very early days, but this trial shows that AI could be a powerful tool, enabling forecasters to spend less time trawling through ever growing piles of prediction data and instead focus on better understanding the implications of their forecasts,’ said DeepMind senior staff scientist Shakir Mohamed.

‘This will be integral for mitigating the adverse effects of climate change today, supporting adaptation to changing weather patterns and potentially saving lives.’

DeepMind worked with the UK’s Met Office in an attempt to hone the tool into something that could be of use to forecasters. 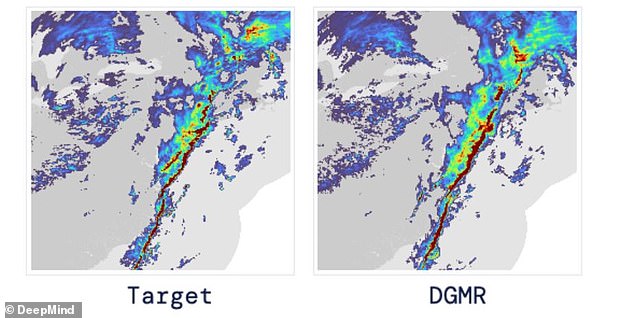 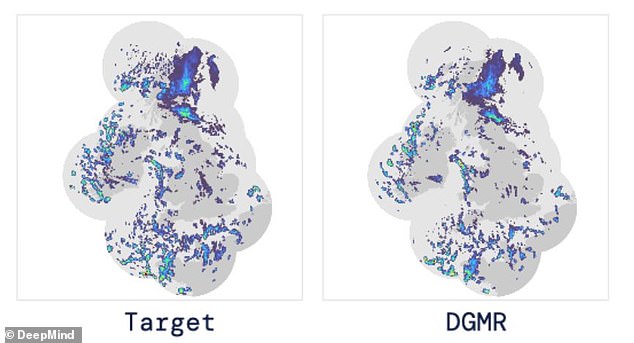 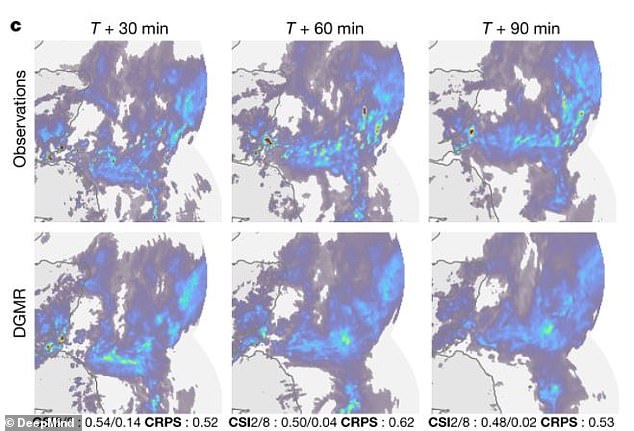 Niall Robinson, the head of partnerships and product innovation at the Met Office, said: ‘Improving the accuracy of short-term forecasting is an incredibly important endeavour.

‘Extreme weather has catastrophic consequences including loss of life and, as the effects of climate change suggest, these types of events are set to become more common.

‘As such, better short-term weather forecasts can help people stay safe and thrive.

‘This research demonstrates the potential AI may offer as a powerful tool for improving our short-term forecasts and our understanding of how our weather patterns are evolving.’

He said the Met Office was now considering how to use the DeepMind research in its forecasting.

The authors wrote in their paper: ‘We show that generative now-casting can provide probabilistic predictions that improve forecast value and support operational utility, and at resolutions and lead times where alternative methods struggle.’

The research is published in the journal Nature.