The end of 10,000 steps a day? Google replaces popular exercise target with ‘Move Minutes’ to encourage users to break up their daily activity

Google has redesigned its fitness app as it looks to redefine the ‘10,000 steps a day’ exercise goal currently used by many fitness trackers.

The technology firm has announced a new version of its Google Fit app that works on smartphones and wearables.

It will focus on users earning Move Minutes and Heart Points rather than counting steps. 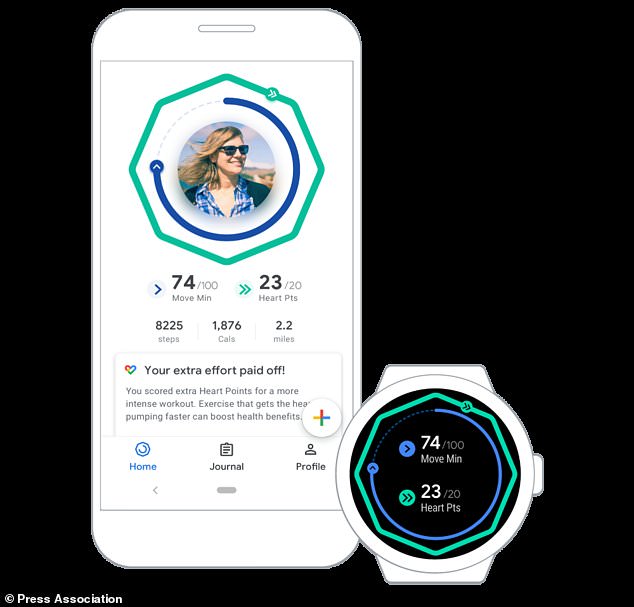 Google has redesigned its fitness app as it looks to redefine the ‘10,000 steps a day’ exercise goal currently used by many fitness trackers. The technology firm has announced a new version of its Google Fit app that works on smartphones and wearables (pictured)

Google has worked with the World Health Organisation (WHO) and American Heart Association (AHA) to create its new metrics.

It says it has used the latest scientific understanding to better analyse physical activity and how it can be used to improve health.

The company said its research showed that many people found the idea of 10,000 steps a day an intimidating goal when trying to be more active, and were more responsive to making small pieces of progress on a regular basis.

The new app will encourage users to move more regularly and increase their heart rate by doing physical activity in order to meet the WHO and AHA recommended amount of exercise.

‘When it comes to your health, it’s important to move more and sit less,’ the technology giant said.

‘Earn Move Minutes for all of your activity and get motivated to make small, healthy changes throughout your day, like taking the stairs instead of the elevator, or catching up with a friend over a walk instead of a coffee.

‘Activities that get your heart pumping harder result in even greater health benefits. Heart Points give you credit for these activities.

‘You’ll score one point for each minute of moderate activity, like picking up the pace while walking your dog, and double points for more intense activities like running or kickboxing.

‘It takes just 30 minutes of brisk walking five days a week to reach the AHA and WHO’s recommended amount of physical activity, which is shown to reduce the risk of heart disease, improve sleep, and increase overall mental well-being.’ Google has worked with the World Health Organisation and American Heart Association () to create its new metrics. It says it has used the latest scientific understanding to better analyse physical activity and how it can be used to improve health (stock)

Google also confirmed that the new version of the Fit app would support data from other fitness apps and trackers, including products by Nike, Strava and Runkeeper.

‘We’re delighted to be working with Google Fit and others to harness the power of technology to maximise the impact of WHO’s evidence-based recommendations for healthier living.’

Both Apple and Google are also taking steps to improve wellbeing and cut smartphone usage by introducing new screen time tools to help users track their phone use habits and cut down where necessary.

Why fitness trackers and smart watches can be inaccurate

There are two ways that a fitness watch can measure the distance a person has ran, walked or jogged.

Some step trackers don’t have a built-in GPS – so will calculate distance travelled on the number of steps that have been taken.

This is based on number of steps multiplied by average stride length – which can affect accuracy.

Other watches use GPS models or connect to your smartphone to use GPS.

GPS models are more accurate – but Which? results showed some that overestimated distance travelled by up to 20 per cent.

How was accuracy measured?

They were also put through a series of daily tasks, such as loading and unloading the dishwasher and carrying shopping.

To test calorie’s burned, testers wore a face mask that was linked to a gas-analysis system.

This measured oxygen intake and carbon dioxide production for each breath, meaning calories were measured as accurately as possible.

Tracker results were then compared with gas-analysis data to find the most accurate devices.