Activists working for Greenpeace have started dropping boulders in parts of the North Sea to prevent industrial bottom trawlers fishing in protected areas.

Greenpeace said the boulders were being spaced at precise intervals inside the Dogger Bank protected marine area and wouldn’t harm the seabed.

The shallow sandbank habitat is home to crabs, starfish, flatfish and sandeels which are food for seabirds such as puffins, as well as for porpoises and dolphins.

Bottom trawling is a type of fishing that involves dragging heavy weighted nets across the sea floor to catch fish – but Greenpeace warn it is ‘destroys the seabed’.

Any bottom trawlers trying to fish over the boulders will get their gear snagged and ruined on the rocks, though passing marine traffic will not be affected.

The conservation charity said it would continue to drop boulders until the Government introduces stricter restrictions on fishing in these areas. 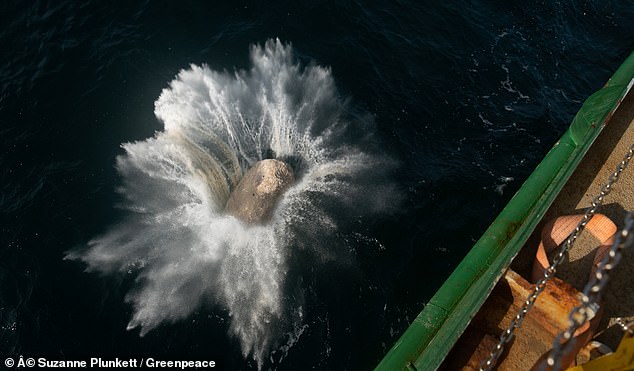 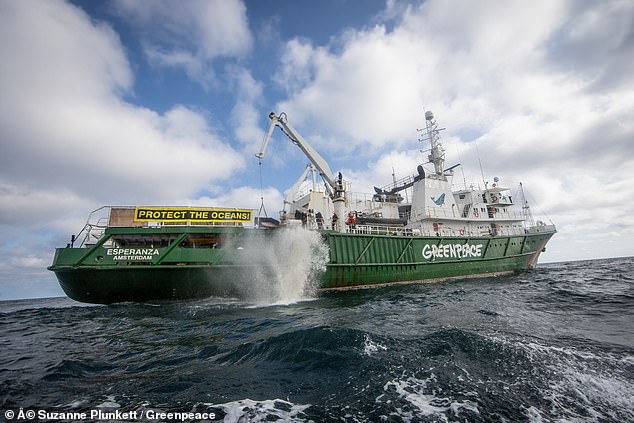 A boulder falls into the North Sea from the Greenpeace ship, Esperanza. The initiative will help prevent destructive bottom trawling which destroys the Dogger Bank’s protected seabed

Dogger Bank’s seabed has a Special Area of Conservation (SAC) protected area designation meaning there are restrictions on fishing in the area.

Environmentalists accuse the Government of failing to properly protect the area, by not fully restricting damaging fishing activity including bottom trawling.

An Environment Department spokesperson said fishing and protection of the seas would be at the heart of the Government’s future fishing strategy.

Greenpeace said it had found 11 large fishing vessels operating in the Dogger Bank marine protected area with their automatic identification system switched off.

The environmental charity has taken matters into its own hands, using its vessel Esperanza to use granite boulders to create an underwater barrier.

The move closes 50 square miles of Dogger Bank from bottom trawling and Greenpeace says it will continue to place boulders on the seabed until the UK Government properly protects the marine reserve.

Chris Thorne, a Greenpeace UK oceans campaigner, was on board the Esperanza during the boulder dropping activity, he said the Government had ‘utterly failed to protect the Dogger Bank’ from destructive industrial fishing.

‘How can you continue to allow bottom trawlers to plough the seabed in a protected area designed specifically to protect the seabed?

‘Allowing bottom trawling in a protected area established to protect the seabed is equivalent to allowing bulldozers to plough through a protected forest,’ he said.

‘Our Government won’t act, and we can’t sit idly by while they allow supposedly protected parts of our oceans to be destroyed.’ 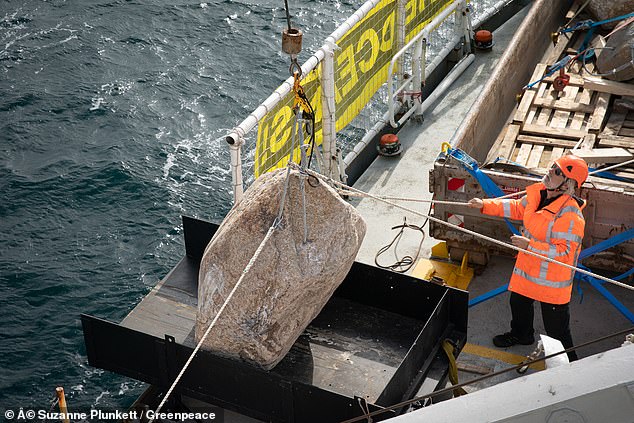 A boulder is manoeuvred onto a slide on the Greenpeace ship, Esperanza. Greenpeace said the granite boulders were being spaced at precise intervals inside the Dogger Bank protected area would not have a significant impact on the seabed 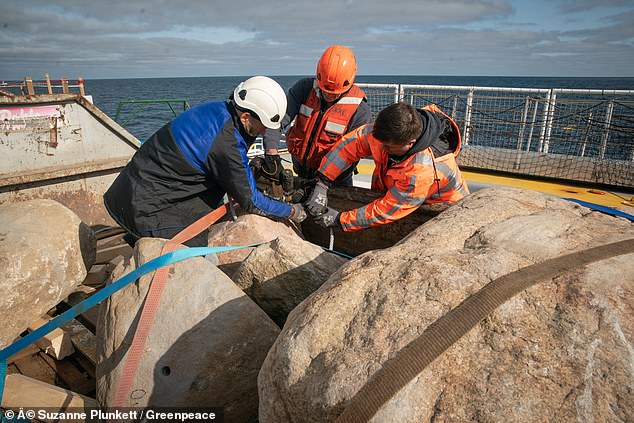 Crew members from the Greenpeace ship, Esperanza, remove cables connecting large boulders. The move closes 50 square miles of Dogger Bank from bottom trawling and Greenpeace says it will continue to place boulders on the seabed until the UK Government properly protects the marine reserve 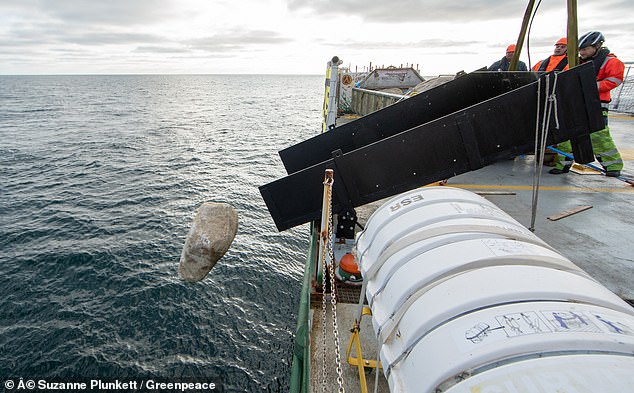 The first of the four cornerstones drops from a slide onboard the Greenpeace ship, Esperanza. An Environment Department spokesperson said fishing and protection of the seas would be at the heart of the Government’s future fishing strategy

Greenpeace said it had commissioned an independent scientific agency, BioLaGu, to conduct an environmental impact assessment that concluded placing the boulders would not have a significant impact on the protected feature of the Dogger Bank.

Activists say they have also informed the relevant marine authorities to ensure navigational safety for mariners in the area.

The Environment Department spokesperson said they had already set up a ‘blue belt’ of protected waters nearly twice the size of England.

‘The Fisheries Bill proposes new powers to better manage and control our marine protected areas and English waters,’ they said.

‘The Common Fisheries Policy currently restricts our ability to implement tougher protections, but leaving the EU and taking back control of our waters as an independent coastal state means we can introduce stronger measures.’

The goal is to preserve marine habitats and wildlife at sea from overfishing or destructive practices that could risk wiping out species.

In the UK these areas create a chain of protection around the coast covering an area that is twice the size of England.

According to the Marine Conservation Society, MPAs are areas of sea that are set up to look after particular seascapes, habitats and species, just like nature reserves and national parks on land.

They help in the protection and recovery of rare and vulnerable wildlife, which would otherwise be threatened with extinction or serious decline.

MPAs also provide places for fish and other marine life to flourish, contributing to a more productive system both inside and outside of their boundaries.

There are 91 zones in waters around England alone and hte first were designated in 2013 – known as the UK Blue Belt.

There are limits on how strict restrictions can be due to the UK being part of the EU Common Fisheries Policy.