The directors of an existing telescope on Hawaii’s Mauna Kea evacuated employees Tuesday amid growing protests that have blocked an access road to the construction site of a second $1.4 billion "Thirty Meter Telescope" (TMT) to be built on the mountain, reports said.

Directors closed the East Asian Observatory located on Mauna Kea on Tuesday as a safety precaution for employees, effectively abandoning millions of dollars worth of instrumentation on telescopes at the facility that require constant maintenance, Hawaii News Now reported. 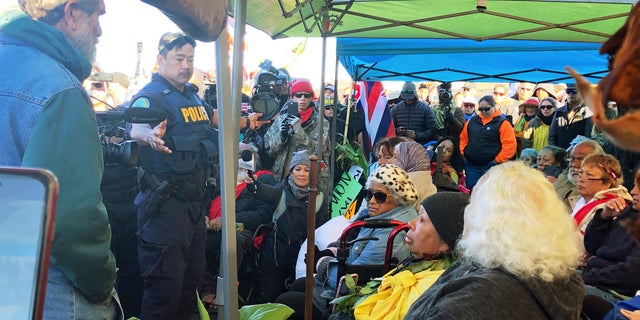 Officers from the Hawaii Department of Land and Natural Resources prepare to arrest protesters, many of them elderly, who are blocking a road to prevent construction of a giant telescope on a mountain that some Native Hawaiians consider sacred, on Mauna Kea on the Big Island of Hawaii Wednesday, July 17, 2019. (Cindy Ellen Russell/Honolulu Star-Advertiser via AP)

“This is a risk for us to have to step away at this point,” Jessica Dempsey, deputy director for the East Asian Observatory, told Hawaii News Now. “This is not a decision we came to lightly, but want to emphasize the importance of safety for our staffs and the facilities.”

Police, the Hawaiian National Guard and self-described native "protectors" had been engaged in a tense standoff there since Monday's scheduled start of construction. Some native Hawaiians consider Mauna Kea a sacred place. On Wednesday, 33 people were arrested during a sit-in on the Mauna Kea Access Road, a state spokesperson told the Honolulu Star-Advertiser. Those arrested were booked on misdemeanor charges and immediately released.

Demonstrators reportedly abandoned vehicles in the middle of the Daniel K. Inouye Highway leading up to the Thirty Meter Telescope construction site. Police eventually drew back from the protest after a deal was reached that demonstrators would clear their cars from the road to allow construction equipment to be transported up the mountain, the newspaper reported.

“This is a risk for us to have to step away at this point. This is not a decision we came to lightly, but want to emphasize the importance of safety for our staffs and the facilities.”

Mauna Kea, the highest peak in Hawaii at nearly 14,000 feet, was chosen as the site for the telescope in 2009 because of its elevation and lack of light pollution. The TMT's size will allow it to see into deep space and produce images 12 times sharper than the Hubbell Space Telescope, its website adds.

The telescope, when completed, will have a 30-meter prime mirror diameter that is "three times as wide, with nine times more area, than the largest currently existing visible-light telescope in the world," its website says. The TMT International Observatory LLC, which describes itself as a "non-profit international partnership" between educational and scientific institutions around the world, is the designer of the project.