Disturbing images reveal the heart-breaking story of two swans forced to make a nest for their unhatched eggs from discarded litter.

Crisp packets, plastic bottles and other items carelessly thrown away by visitors at Drumpellier Country Park in Lanarkshire were used by the confused birds to build their nest.

The horrifying images of plastic surrounding the birds demonstrates the widespread scale of littering and its impact on wildlife. 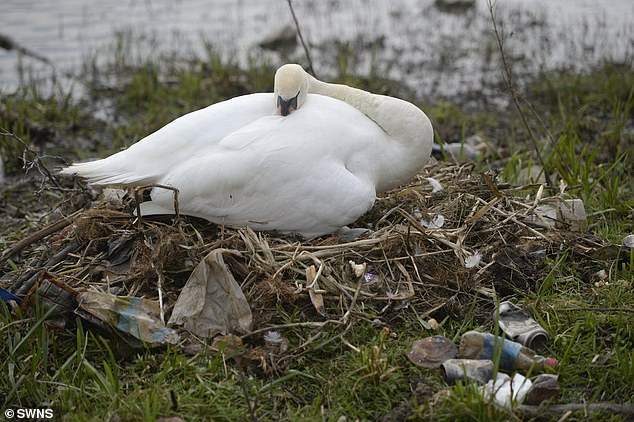 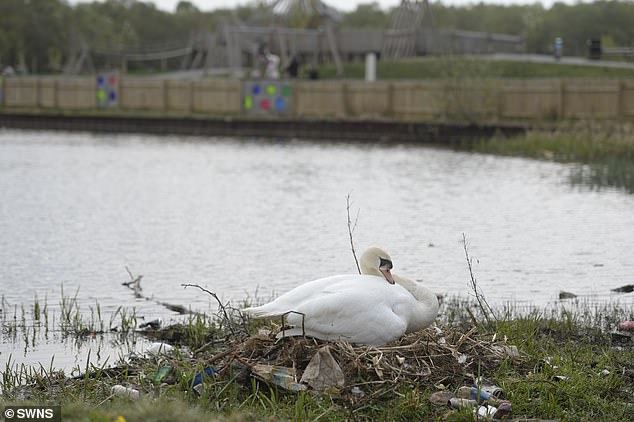 Crisp packets, plastic bottles and other items carelessly thrown away by visitors to Drumpellier Country Park, near Coatbridge, North Lanarkshire were used by the confused birds to build the nest for their eggs

One visitor said: ‘It is absolutely disgusting. The poor swans. It is so embarrassing that we have this beautiful park in Coatbridge and the privilege of having these lovely animals yet look how poorly we are taking care of both.

‘My daughter lives near Queen’s Park in Glasgow and there’s a pair of nesting swans there.

‘The nest is pristine and nothing like this mess we can see here. It’s unacceptable.’

The two swans were seen adding to the nest, which sits in the middle of the park, and investigating empty drinks cans with their beaks.

Swans lay up to seven eggs in late April and early May, with both the male and female incubating the nest.

Scottish SPCA chief superintendent Mike Flynn said: ‘Sadly, we have noticed an alarming increase in animal injuries due to incorrectly discarded rubbish, with everything from cats and bats, to badgers and foxes being affected.

‘We want to remind everyone that they can help save wildlife by properly disposing of their rubbish.’

A spokesman for North Lanarkshire Council said: ‘Discarded rubbish is a blight not only for park users, but also poses a risk to the animals that call the park home.

‘We would urge everyone using the park to properly dispose of any litter in the bins provided. Anyone caught throwing rubbish away will face being fined.’ 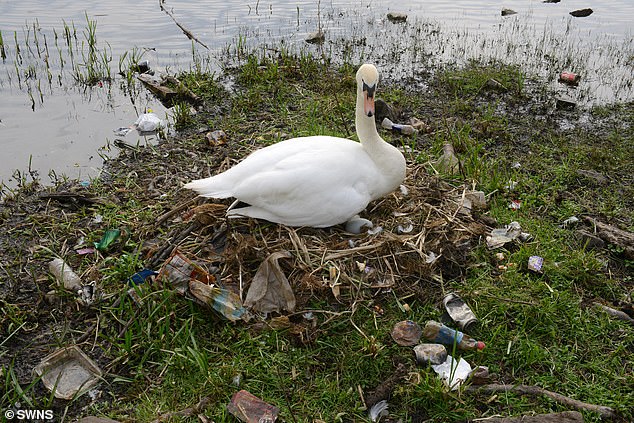 Swans lay up to seven eggs in late April and early May, with both the male and female incubating the nest. The long-term impact of using litter nests is unknown but may have negative health implications for the birds