Vast swathes of China could be left uninhabitable to humans towards the end of the century due to blistering climate change-driven heatwaves, scientists warn.

China’s north plain is the most densely populated region of the country, and serves as a key agricultural region to provide food for the country’s 1.4 billion residents.

According to new research, the 1,500 square mile region (4,000 square kilometres) will become a wasteland if greenhouse gas emissions continue at their current rate.

Climate change will result in a fatal combination of both heat and humidity, which can cause healthy individuals to drop dead in a matter of hours.

The scientists behind the study warned that unless China – the largest emitter of greenhouse gas emissions in the world – curbs its pollution levels, it could trigger serious consequences for its population. 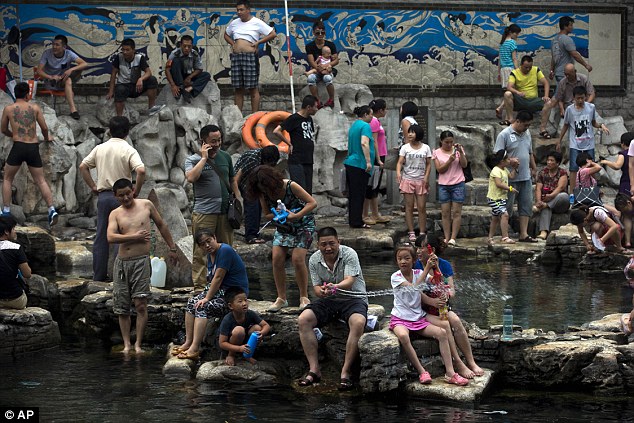 Vast swathes of China could be left uninhabitable to humans towards the end of the century due to blistering climate change -driven heatwaves, scientists warn. China’s north plain is the most densely populated region of the country

Massachusetts Institute of Technology scientists predicted the devastating effect climate change will have on the densely-populated region of China, which stretches the length of the Yellow River.

For the study, which was published in Nature Communications, the researchers looked into the ‘business-as-usual’ situation and modelled the effects of current greenhouse gas emission levels over the next several decades.

According to the models, fatally humid heatwaves — known as ‘wet bulb temperatures’ (WBT) — are set to become more common in the north plain region.

Humidity dramatically exacerbates the effects of heatwaves for humans, as it stops them being able to shed excess heat from their bodies by sweating.

Without the use of this natural cooling mechanism, even fit and healthy humans sat in the shade can be overwhelmed and die in less than six hours.

A WBT above 31°C (87.8°F) is classed by the US National Weather Service as an ‘extreme danger’, warning people that ‘if you don’t take precautions immediately, you may become seriously ill or even die.’

Low rainfall across the region in China makes irrigation networks necessary to effectively plant in the highly fertile soil.

However, as temperatures increase these systems will cause high levels of water evaporation, making the air in the north plain incredibly humid.

The researchers found fatal WBTs of 35°C (95°F) would strike the north China plain repeatedly between 2070 and 2100, unless carbon emissions are cut.

MIT scientists found that Shanghai, for example, would exceed the fatal threshold five times and the ‘extreme danger’ WBTs would occur hundreds of times.

Even if China makes significant carbon cuts, the models still showed the ‘extreme danger’ WBT would be exceeded many times between 2070 and 2100. 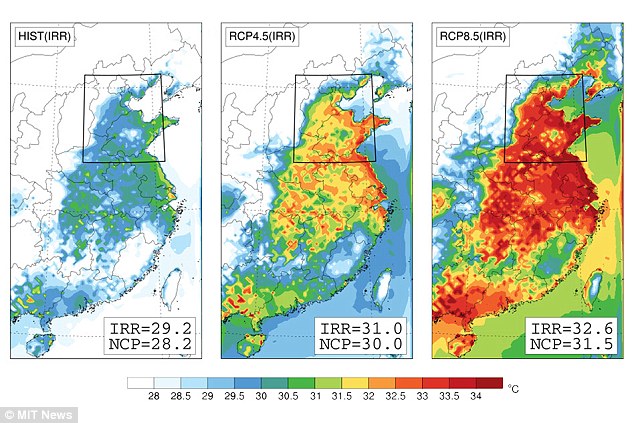 To arrive at their projections, Dr Eltahir and Dr Kang ran detailed climate model simulations of the area — which covers about 1,500 square miles (4,000 square kilometres) — for the past 30 years and modelled the current emissions levels for the next several decades

‘This spot is going to be the hottest spot for deadly heatwaves in the future,’ said Professor Elfatih Eltahir, the Massachusetts Institute of Technology (MIT) scientist who led the study.

‘The projections are particularly worrying because many of the region’s 400 million people are farmers and have little alternative to working outside.

‘China is currently the largest contributor to the emissions of greenhouse gases, with potentially serious implications to its own population. 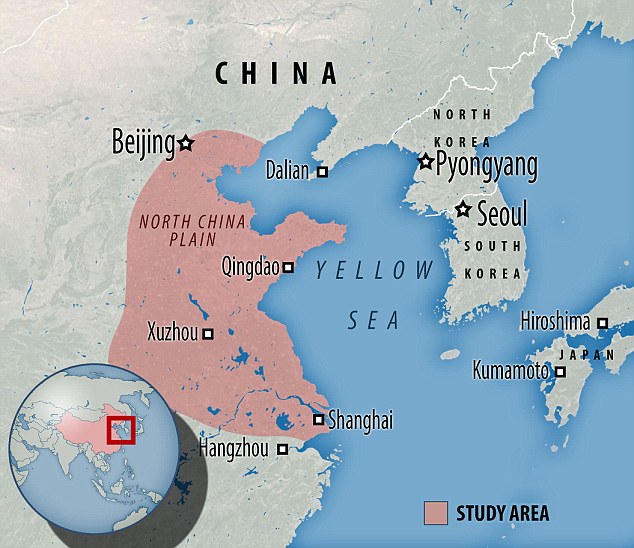 The north plain of China runs the length of the Yellow river and is an agricultural hub for the nation and its 1.4 billion inhabitants. Researchers saw that this vulnerable region will be besieged with deadly heatwaves between 2070 and 2100 if emissions carry on at the current rate

WHAT ARE THE BEST WAYS TO KEEP COOL DURING A HEATWAVE?

The NHS has a number of tips for keeping cool during bouts of unusually hot weather.

– Open windows or other vents around the home

– Turn off lights and electrical equipment that isn’t in use

– Take a break if your home gets too hot: Head to a nearby air-conditioned building like a library or supermarket 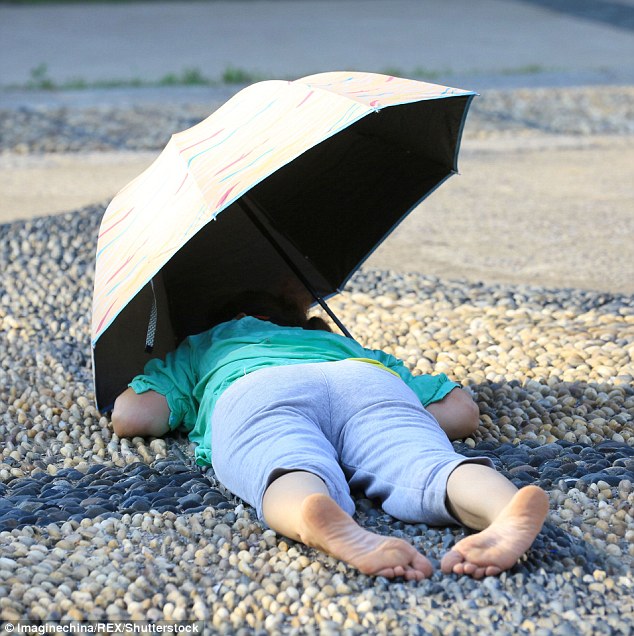 The plain has an extensive irrigation system in place that is contributing to the extreme weather. The surface water left over as a result of the irrigation boost humidity and puts more water vapour in the air, making this area particularly prone to WBTs (stock)

To arrive at their projections, Dr Eltahir and Dr Kang ran detailed climate model simulations of the area for the past 30 years, before looking to the future.

The MIT researchers found that the compounding effects of irrigation and climate change result in a larger increase in the wet-bulb temperature (3.9°C/7°F) than that of each effect alone (0.5°C/0.9°F for irrigation, 2.9°C/5.22°F for climate change).

HOW HIGH DID GLOBAL TEMPERATURES REACH DURING THE HEATWAVE OF JULY 2018?

Temperature records worldwide were shattered by an unusual global heatwave in late June and early July 2018.

Stifling heat cracked roads and buckled roofs across Britain, as Motherwell hit the highest temperature ever recorded in Scotland at 91.8°F (33.2°C). The previous record was 91.2°F (32.9°C) set in August 2003 at Greycrook.

In Canada, Montreal smashed its previous record for the hottest temperature, as readings showed 97.9 °F (36.6°C)

Ottawa posted its most extreme combination of heat and humidity on July 1.

Meanwhile in the US, Denver, the Colorado state capital, tied its all-time high-temperature record of 105°F (40°C) on June 28

Burlington, in Vermont, set its all-time warmest low temperature ever, recording a low of 80°F (27°C) within the 24 hour period on July 2

Whilst the islands in Western Europe smouldered in its own heatwave, Eurasia was baking as well.

Russia, the host country of the World Cup this year, is also in the midst of a heatwave and several spots across the south of the world’s largest country either matched or exceeded their warmest June temperatures.

These fantastical numbers come just months after Pakistan posted the hottest temperature ever seen on Earth.

The research is the latest in a series conducted by the MIT team, with their other studies focusing on deadly heatwaves striking the Persian Gulf and South Asia.

The research comes at the same time as another study, published in the journal PLOS Medicine, found that heatwave deaths will ‘increase dramatically’ within 60 years due to global warming.

If people fail to adapt, the worst case scenario is a 471 per cent spike in heatwave-induced deaths. Tropical and subtropical regions will be worst affected, closely followed by Europe, Australia, and the US, researchers warned.

The study projected ‘excess mortality’ in relation to heatwaves in the future under different scenarios, determined by the levels of greenhouse gas emissions.