Home » Science » He’s Too Quiet for His Mate to Hear Him. So He Makes a Megaphone.

For better or for worse, female tree crickets tend to prioritize two traits in their mates: loudness and size. The louder the boy cricket, the more likely a lady is to be wooed by his serenade. The larger he is when she finds him, the more time she will stay locked in a sexual tryst — in some cases, up to an hour of rollicking, sperm-shuttling fun.

That might sound like bad news for suitors that are smaller or soft-spoken. But a few of these males can deploy a clever ruse to make themselves heard above the din, new research shows. To stay competitive, the study finds, crickets with quieter voices or tiny bodies will fashion mini-megaphones out of leaves to amplify their calls, coaxing females into mating with them longer and more frequently than they otherwise would.

Rittik Deb, a biologist at the National Center for Biological Sciences in Bangalore, India, can still vividly recall the first time he observed the behavior, called “baffling,” in 2008. Then a graduate student, he watched in awe as a male cricket, no bigger than a kernel of corn, scurried up a large leaf of a pignut plant and munched a hole into its fleshy center. The little lothario then shoved his head and forelegs through the opening, as if at a carnival’s photo stand-in, and began to trill a surprisingly loud tune.

“We humans boast about loudspeakers, but they have evolved to make such a simple structure,” said Dr. Deb, a co-author of a paper on baffling that was published on Wednesday in the journal Proceedings of the Royal Society B. “I don’t have exact words for the joy that I felt.”

Tree cricket baffling was initially described by scientists in the 1970s. Since then, a smattering of reports have looked at the ways in which males will chew leaves into botanical speaker systems. But little was known about how or why the behavior came to be, Dr. Deb said.

To pinpoint baffling’s evolutionary origins, Dr. Deb and his colleagues at the Indian Institute of Science in Bangalore, where he earned his doctorate, eavesdropped on tree crickets of the species Oecanthus henryi. Baffling males, the researchers found, tended to be more petite than their unmic’d counterparts.

When warbling without a leaf, smaller males chirped at about 60 decibels — akin to noisy restaurant chatter. But once outfitted with foliage, the crickets were able to amp up their serenades substantially, “at least double or triple the volume,” Dr. Deb said. The bigger the leaf, the more the crickets were able to broadcast their bravado, on occasion achieving sound pressures around 70 decibels, about the roar of a vacuum cleaner.

In the lab, the researchers found that females naturally gravitated toward louder cricket calls. The crickets even eagerly approached quiet chirps when they were played from speakers at a higher volume — the scientists’ synthetic take on baffling.

Baffling also seemed to increase smaller males’ chances of engaging in longer bouts of sex, giving their sperm more of an opportunity to mosey over to their mates. Although small males don’t usually mate for more than a few minutes at a time, the length of that sexual spell can more than double when they amplify their calls with leaves, the researchers found.

That might sound like the cricket version of catfishing. Then again, baffling, a form of tool use, could level the playing field for the underdogs of the tree cricket world, said Natasha Mhatre, a tree cricket expert at the University of Western Ontario in Canada who worked with the researchers on a previous study about baffling.

With leaves on their side, males that were disadvantaged by their song or size could become “just as sexy” as their brethren, said Tamra Mendelson, an ecologist and evolutionary biologist at the University of Maryland, Baltimore County, who was not involved in the study. 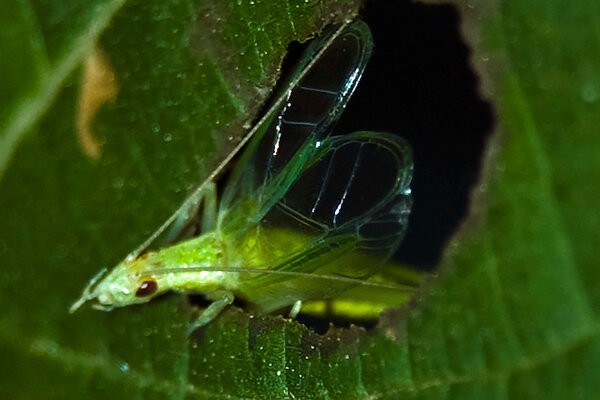 Still, baffling has its limits, and many loud or large males don’t bother with the behavior. That might be because these crickets already have more than enough females to mate with, the researchers found through a mathematical model.

Tree crickets are hot to trot for only a couple of hours each evening. Large males, who can copulate for 45 minutes at a stretch — thus increasing their chances of siring more offspring — might max out their mating by monopolizing only two females a night. Smaller and quieter contenders, on the other hand, have more time to make a sound-augmenting leaf and book extra engagements.

In a pinch, the insects can make use of other instruments as well. Dr. Deb recalled one industrious suitor in the lab who, with no pignut available, gnawed his way through a sheet of tissue paper and stuffed his noggin through the gap.

It’s true that being big has its perks. But “there are many ways of being attractive,” Dr. Mendelson said.