The footage begins with the lens of the camera pointing directly at the kitchen and dining room of the house.

Out of the left-hand corner of the screen, a slim object is pictured zapping through the lens.

After gliding through the air, the object cuts through the lens and lands on the dining table positioned in front, before appearing to dissolve into the surface.

The CCTV, which was uploaded to Reddit only hours ago, has sent the internet into a frenzy.

A friend of the homeowner uploaded the clip, asking: “Is this a common occurrence or is it safe to say I should never go to his house for a beer again?”

They later explained how the homeowner had received a notification from the camera system at 2.30am alerting them of detected motion.

One person commented: “One of the better posts here, nice find. One time thing or has your buddy caught others on camera?”

A second person said: “That is a really good find. 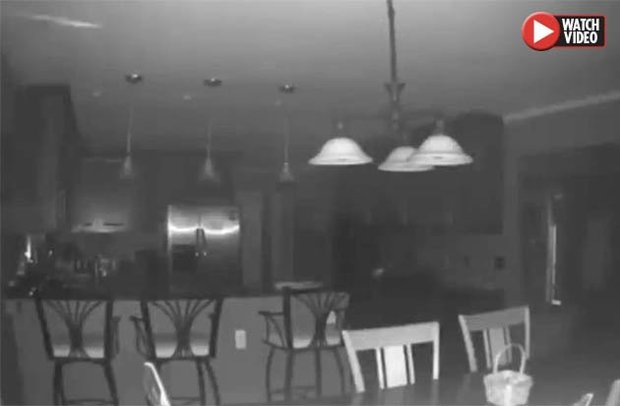 “Usually orbs are bugs or dust but it’s pretty easy to tell the difference between those and something out of the ordinary.

“The fact that it simply disappeared after landing on the floor makes it hard to disprove as a bug or something.

“I also think it’s cool that the system tried to identify the object.”

A third person claimed it looked like “hair, or cobweb blown by the A/C”.

It comes after a mum became convinced that ghosts exist after watching chilling footage from her child’s crib.